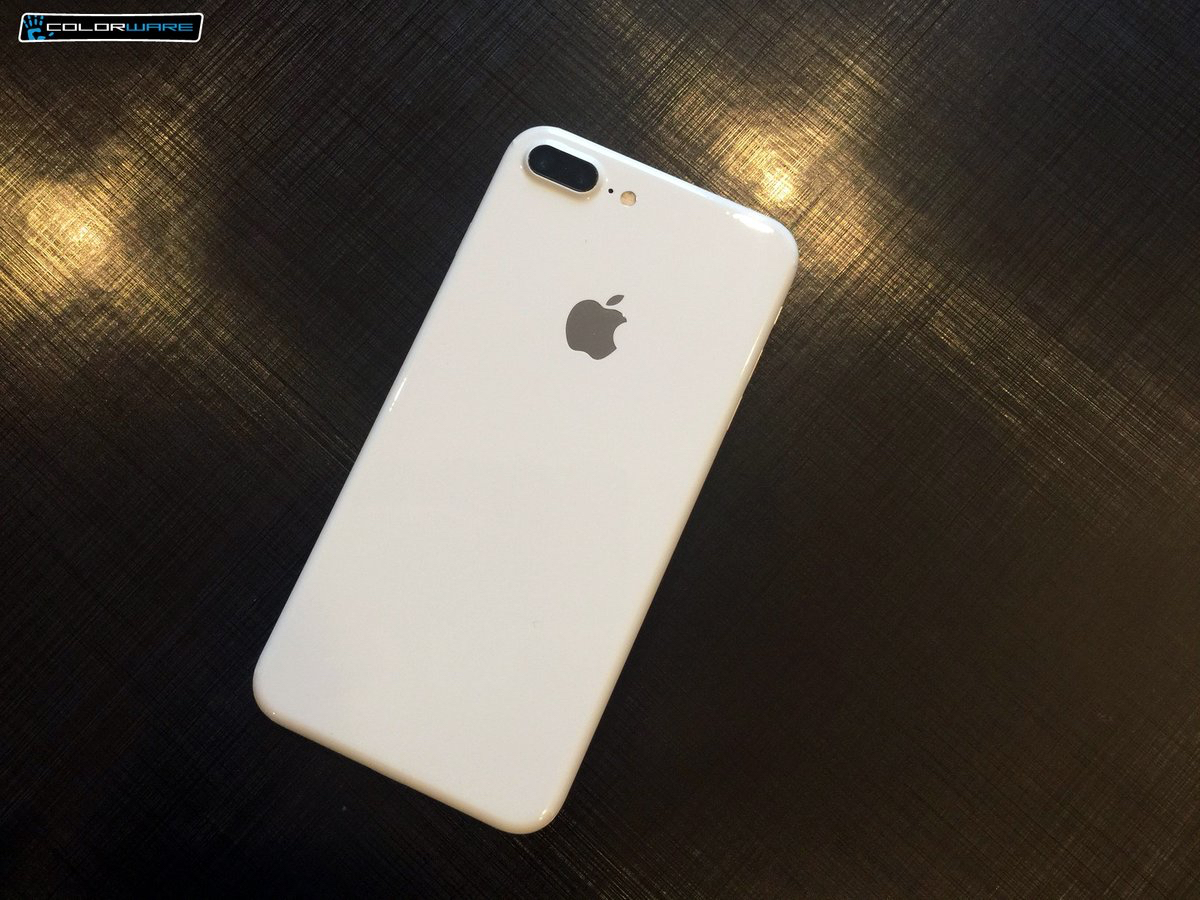 On Tuesday, Apple afficionados were treated to a new wave of white shell iPhone 7 mock-ups and purported leaks hitting the internet, advancing the notion that the Cupertino-based company could plan to release a white counterpart to their Jet Black coating some time around March 2017.

From an aesthetic standpoint, everyone is going to have their two cents on the necessity of it in the grand scheme of things. Simply by moving the discussion from the fashion sphere to the finance department though, the ambivalence in regard to whether or not this iPhone release is genuinely necessary quickly crumbles and clearly comes down on one side of the fence.

As we will learn in late January, Apple’s first quarter of the fiscal year 2017 is going to look after itself nicely, but in view of the Q2 figures and a long summer following, Jet White definitely needs to happen. Two key reasons must be paid attention to in order to understand the imperative of a Jet White iPhone for a healthier bottom line in the fiscal year of 2017.

Let’s kick this off by saying that by and large Apple is of course still flying incredibly high and unlike some, I am not going to exhibit the overbearing arrogance to tell you otherwise. With that out of the way, the Apple of late has seen quite a few hiccups and could be on the precipice of another negative record year. Yes the Q1 earnings report in January is going to look glorious for a variety of reasons (and good on Apple for that) with analysts predicting revenues of up to $76.96 billion – which would marginally best last year’s Q1 results – but that is hardly telling the whole story. The whole story namely comprises the fact Apple desperately needs that break, hopefully ending a negative streak of three quarters of year-over-year declines in revenue.

The answer to whether or not this negative record can be broken we will learn soon enough, and does not hinge on the possible introduction of a Jet White iPhone 7 some time around March. Yet it is important to remember that in spite of the assumedly strong figures that will be published by the end of January, it is not all smooth sailing at Apple. The truth of the matter is that the drop from the beginning of the fiscal year 2017 to Q2 and Q3 could be steeper than ever, which is why the new coating would play a crucial role. Here are the two central points to substantiate my claim:

Could this be the Jet White iPhone 7? pic.twitter.com/pHoDiZ63ON

It somewhat befuddles me to think the iPhone SE happened this year, but it did see the light of day just this March. Accordingly, Apple had an absolute crowd pleaser in the pipeline for that critical Q2 spell following the holiday quarter. The SE succeeded at bolstering the sales revenue from March onwards, appealing to both Apple nostalgics and segments with less buying power. But where there is light, there is also plenty of shadow, because despite the additional revenue stream (let’s ignore product cannibalisation for simplicity), the drop in revenues from Q1’16 to Q2’16 has been appreciably steeper than the corresponding curve back in 2015. The graph following below visualises that by pitting quarterly revenues of the two years against each other. The green wedge is visible enough already, so just imagine the drop of the curve without the SE pulling its weight in 2016.

What does that tell us about 2017? The gist is that not even the iPhone SE in 2016 could save Apple from continuing their quarterly year-over-year decline. Now imagine the additional revenue of a new introduction to the iPhone family in March breaking away altogether in 2017, and the impact this would have on the revenue curve. It is by no means a long shot to say that the dropout would be considerably worse than what we saw in April this year, when Apple reported a drop of $8 billion in revenue in year-over-year comparison for Q2 ($58bn in Q2’15 to $50bn in Q2’16). A white and shiny iPhone 7 fresh on the shelves to grab in March could counteract the trend of a back to back plummet in Q2. If Apple were to forfeit the chance of a white iPhone boost, I believe the Q2’17 numbers could dwindle down to a dismal $40 billion. 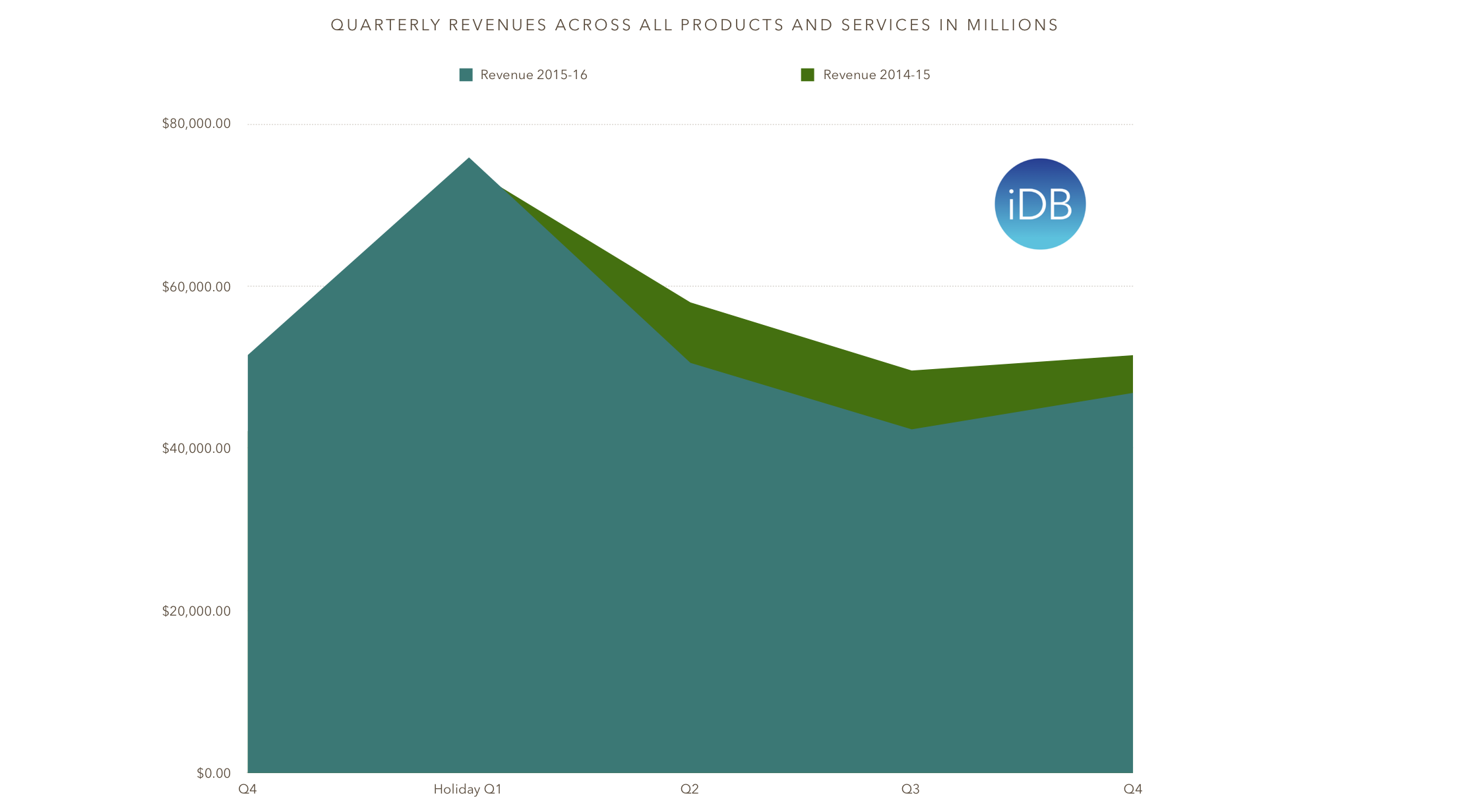 Aside from the iPhone SE vacuum occurring in 2017, other variables need to be factored in to understand the seriousness of the descent we might face after peaking in late January: Apple Watch sales are still rocky (although we might get a glimpse of the potential of the Series 1 and 2 in January’s earnings report) and have gathered zero to negative momentum in 2016 (more on that later) and analysts are expecting the iPhone 7 euphoria to wane quicker than in previous years, eventuating in much lower shipment numbers in early 2017. With the shine coming off the iPhone 7 earlier than it did for its predecessors, the Jet White iPhone could be the lifeline Apple needs. Perhaps not to fully tide them over spring 2017, but at least to soften the blow.

No matter how hard Apple is going to try to put a spin on this, PR language can not gloss over the monumental fail the launch of the AirPods has been. At $159, the product must harvest margins that will make any Apple executive salivate. Add to it the fact that hundreds of millions of iPhone users are potential buyers and Apple really forewent a massive chunk of revenue for what they label ‘Other Products’. This category also contains Watch sales, which as touched on before evidently stagnated through 2016.

I don’t mention the wearable at this point because I like to go off on a tangent, but rather because the slow rollout of Series 1 and 2 could be indicative of what the AirPods might suffer from as well: we do not know at what point AirPods are actually going to attain a fair market saturation, we are not privy to how bad the bottleneck situation is right now and how distant a future lies in which we can promenade into an Apple Store and grab a pair on a whim. The backlog could easily carry into Q2 and hamper the value of ‘Other Products’, which is going to be covered up by tremendous iPhone unit sales in Q1, but laid bare in Q2.

Beats X are suffering an even grimmer fate, one where we know next to nothing about a possible release in 2017. Just like with the AirPods, this is going to be an accessory badly needed to counterbalance (as much as ‘Other Products’ worth $2-5 billion can offset dwindling iPhone sales) the sales revenue hit to be recorded in Q2’17. Besides, never mind the opportunity costs for Apple with those two big cash cows not providing the milk they could and should have if handled more professionally.

As you can see in the data, ‘Other Products’ are a far cry from the worth of any other product category, even though they were designated to enjoy a huge growth spurt right about now. The botched launches are going to thwart that development for months into the fiscal year of 2017, again calling for an alternative product to iron out such shortcomings. This is again where the Jet White iPhone enters the scene, ideally coming to the rescue.

In conclusion, those should be the two major motivations for Apple to launch Jet White in March. Another rather tongue in cheek point to consider is that the success story of iPhone 7 is in parts surely down to the simple fact that they were finally offered in new, black colors. Mind you, that is not to say the iPhone 7 boasted underwhelming specs, but at the end of the day visual stimuli often make or break purchase decisions. It has proven to work beautifully for iPhone 7 in 2016 and it would be smart business to make use of that strategy one more time next March.