Apple on Cyber Monday seeded new beta downloads to its registered developers who are enrolled in the Apple Developer Program. If you’re a developer, iOS 10.2 beta 4 (build 14C82), watchOS 3.1.1 beta 4 (build 14S879) and macOS Sierra 10.12.2 beta 4 (build 16C53a) are now readily available as standalone downloads through the company’s portal for developers or as over-the-air downloads on devices with a prior beta and an appropriate configuration profile. 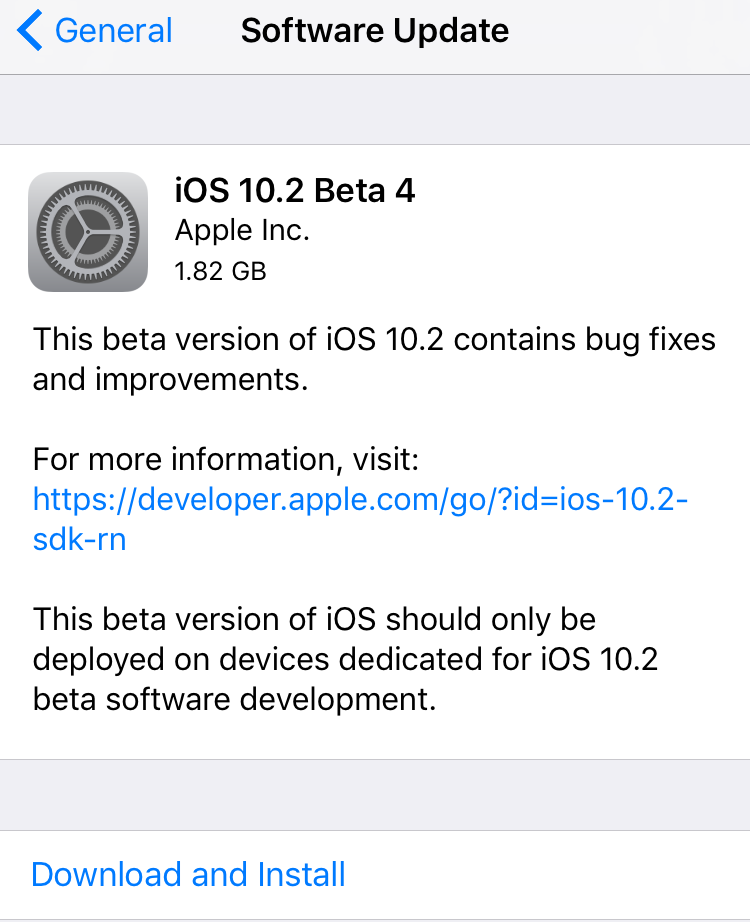 While iOS 10.2 beta 4 may not show up as an over-the-air download in Settings → General → Software Update, the full installer is available in Dev Center. It’s unclear if Apple has pulled iOS 10.2 beta 4 shortly after it hit the servers, but we’re investigating this and will definitely keep you updated.

According to release notes accompanying these downloads, no new features have been introduced in the latest betas as Apple continues squashing bugs and smoothing out the experience in these forthcoming software updates for the iPhone, iPad, iPod touch, Apple Watch and Mac devices.

iOS 10.2 includes a trio of iPhone 7 and iPhone 7 Plus wallpapers, a new TV app and widget, additional camera features, all-new “Love” and “Celebration” screen effect in Messages, additional music sorting options and dedicated buttons for Repeat and Shuffle in the Music app, an option for preserving Camera settings and more.

Both iOS 10.2 and tvOS 10.1 may support the promised Single Sign-On feature that remembers your cable logins across video apps. macOS 10.12.2 and watchOS 3.1.1 pack in mostly bug fixes and performance enhancements to address issues that have surfaced since the respective releases of macOS 10.12.1 and watchOS 3.1.

As a bonus, some of the older emoji images have been redrawn while additional Unicode 9.0 expressions have been added, too, such as clown face, drooling face, selfie, face palm, fox face, owl, shark, butterfly, avocado, pancakes, croissant and more.