Single Sign-On, a feature that remembers and uses your cable/satellite logins across compatible video apps for the iPhone, iPad, iPod touch and Apple TV, was originally promised months ago and should finally go live alongside public releases of iOS 10.2 and tvOS 10.1 next month.

As noted by MacRumors, AT&T’s DirecTV service is now being listed as a Single Sign-On compatible app alongside the previously listed compatible providers: Dish, Sling TV, Hotwire and GVTC Communications.

If your iPhone, iPad or iPod touch has iOS 10.2 beta 3 installed, DirecTV should appear as an option in Settings → TV Provider. On the fourth-generation Apple TV, Single Sign-On can be accessed by going to Settings → Accounts → TV Provider.

After entering your cable credentials as part of your TV subscription, Single Sign-On securely stores your login and password so other compatible video apps can log you in automatically. DirectTV claims about twenty million subscribers in the United States, making it the biggest provider to support Single Sign-On so far. 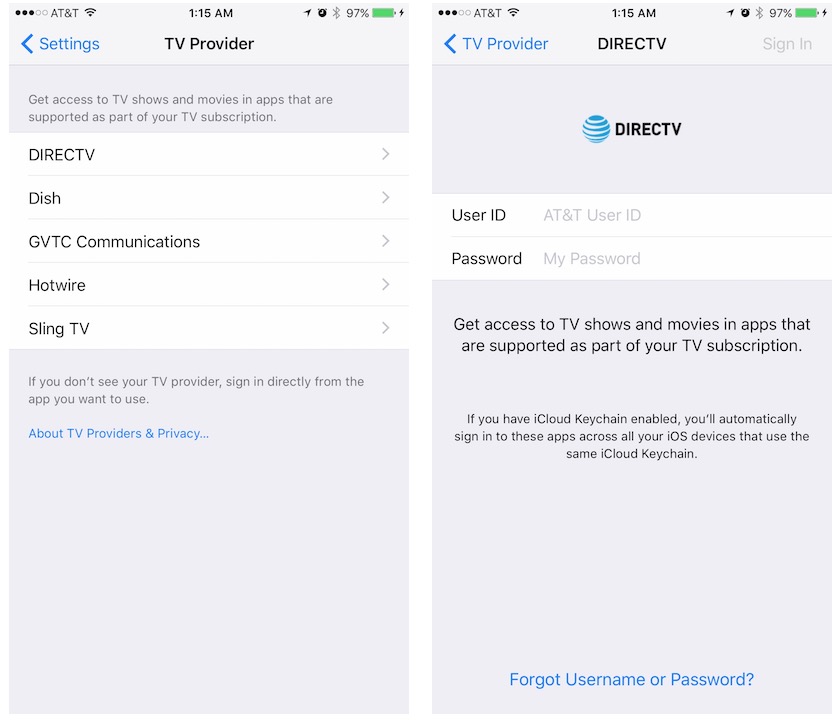 Taking a closer look at the app, it brings all your TV show and movie purchases/rentals from the iTunes Store, as well as content from other compatible apps (sans Netflix) in one central place, allowing you to pick up where you left off and receive recommendations on additional content.

Initially announced at WWDC 2016, Single Sign-On was expected to be released with the tvOS 10 software update for Apple TV back in September, but the feature didn’t make it in the first release.

As for the TV app, we’re pretty sure that it will be launching for public consumption in December, probably as part of the iOS 10.2 and tvOS 10.1 software updates and alongside Single Sign-On’s debut.