The new MacBook Pro does away with the classic Mac startup sound that’s been present on Macs for the past seventeen years, probably to avoid annoying users as the notebook automatically powers on when you open the lid. But rather than completely kill the chime, Apple’s disabled it on the new MacBook Pro.

Thankfully, you can re-enable it with a simple Terminal command.

We think this could mark gradual phasing-out of the familiar Mac startup sound just as the one-port MacBook with USB-C has spelled doom for Apple’s proprietary but love MagSafe connector. Here’s a brief history of the Mac boot chime.

History of the Mac startup chime

An excerpt from the Mac startup chime entry on Wikipedia:

The Macintosh startup chime is a single note or chord simply known as “the startup sound”. The sound used differs depending on the ROM, which greatly varies depending on model type.

This short sound is played when an Apple Macintosh computer is turned on. The sound indicates that diagnostic tests run immediately at startup have found no hardware or fundamental software problems.

The Mac startup chime as we know it made its debut on the 1993 iMac G3. Different versions of the startup sound have been present on the Mac since the Macintosh II.

Here’s a YouTube video with some of the Mac startup sounds over the years.

Pingie has more on the boot chime history:

Over the years the chime has changed. The first being a “bong.” Quadras brought in a chord composed in a C major on a Korg keyboard. It was pitch shifted a few times. Power Macs brought in an electronic jazz guitar strum.

The 20th Anniversary Macintosh had a poppy remix of the classic bong as a tribute to the original Mac. But all Mac computers post the iMac G3 have had the same sound – an F-Sharp cord sound modulated from a PowerMac startup sound.

And here are all Mac startup and crash sounds.

And here’s the complete interview Dutch blog One More Thing did with Jim Reekes, the composer of the Mac startup sound, in which he talks about the creation of that sound, his work on Quicktime and other audio features we take for granted on the Mac.

You can also download an archive of all the Mac startup and crash sounds from Pingie, if you wish. After the ZIP file has finished downloading to your Mac, open it from your Downloads folder to unpack it.

You should be presented with a series of sound files in the Finder, as shown below. Open a file to listen to any particular Mac startup sound or select the file and press the Spacebar key to preview it even faster with the Mac’s built-in Quick Look feature. 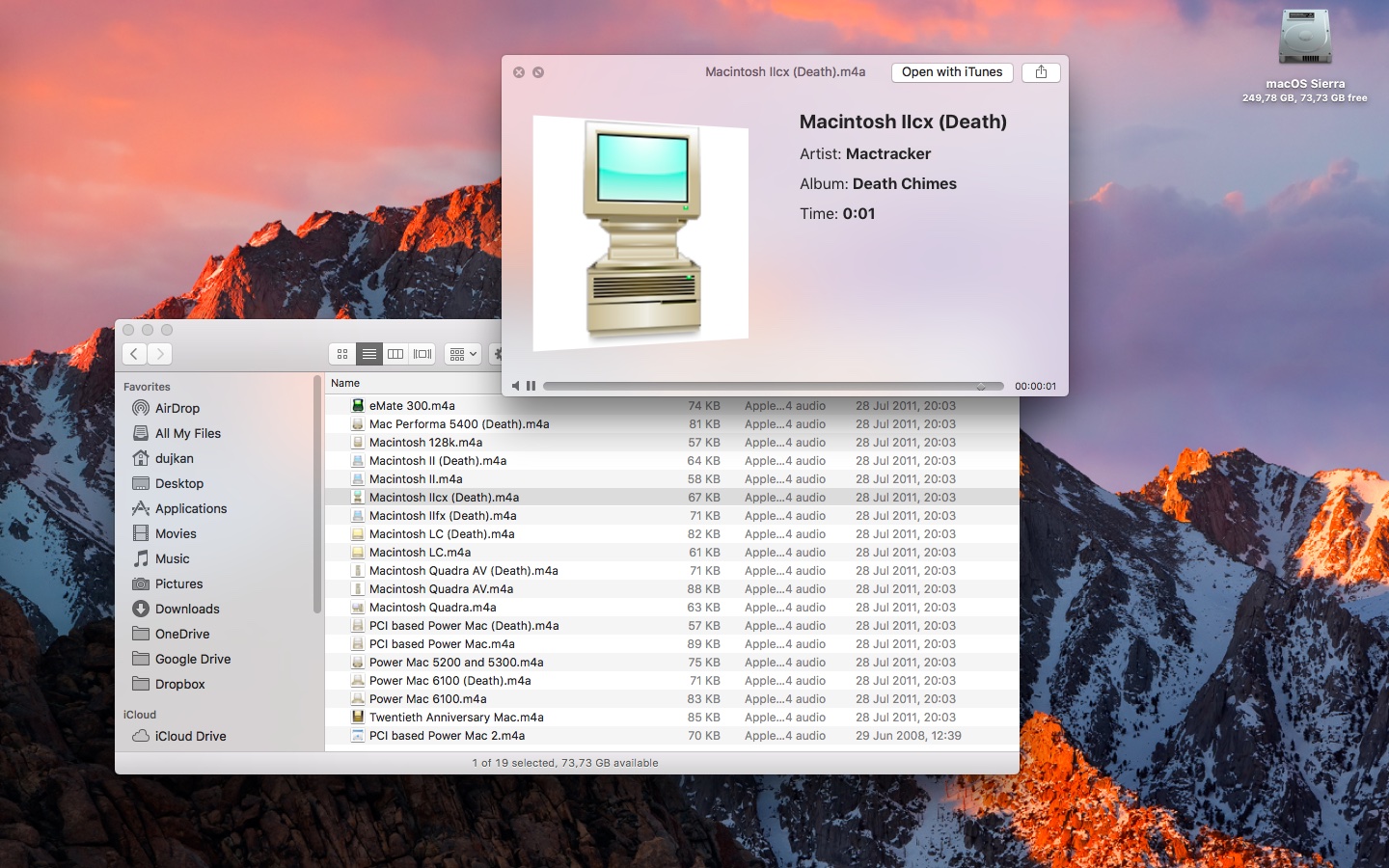 As mentioned earlier, Apple hasn’t removed the iconic boot chime from the new MacBook Pro completely. For owners of the late-2016 MacBook Pro who’d like to bring back the startup sound, a simple Terminal workaround will do the trick.

To disable the boot chime on other Macs permanently, check out Anthony’s tutorial.

Are you saddened that Apple’s turned off the boot chime by default on the new Pro? And while we’re at it, is this a one-off thing because the new Pro automatically powers on when the lid is open or a sign of things to come to other Mac models, do you think?