Following an unprecedented global recall of at least 2.5 million Note 7 smartphones due to faulty batteries causing some of the units to catch fire, Samsung today told Reuters that more than one million people worldwide are now using Galaxy Note 7 smartphones with batteries that are not vulnerable to overheating and catching fire. However, the firm has another problem on its hands: exploding washing machines. It’s certainly been a rough month for Samsung.

As for the Note 7 fires, Samsung said two days ago that “Our focus now is to make sure that all affected devices are replaced as quickly and efficiently as possible.”

In the name of transparency, the company released the following stats:

The company has issued a software update to Note 7 owners which puts up a prompt each time the device’s screen turns on, urging customers to power down and exchange their Note 7 as soon as possible.

In its press release, Samsung also asked customers who own affected Galaxy Note 7 devices to power down and return them. Bloomberg reported that Note 7 fires are the result of Samsung’s desire to beat the iPhone 7 to market.

Reports of Note 7 fires in China are still coming in, prompting Samsung to apologize for not providing a detailed explanation why the Notes sold in China were safe.

The company previously said that Note 7 units bound for China were safe as they used batteries that came from a different supplier to those that could overheat.

“Currently, the brand new Note 7 products that have been swapped in overseas markets are using identical batteries to those that were supplied and used for the Chinese version,” Samsung said.

Samsung said it takes reports of Note 7 fires in China very seriously and has conducted inspections on such devices. Batteries for the burnt phones were not at fault, Samsung said, adding its conclusion was also backed up by independent third-party testing.

Analysts say the Note 7 recall could cost Samsung billions of dollars and tarnish its brand image. Despite the recall, reports of exploding Samsung devices persist.

Travel+Leisure reported today that a recent Delta flight from Detroit to Amsterdam diverted after a Samsung tablet onboard overheated and started smoking.

“The flight diverted to Manchester, where authorities investigated the smoke and found a Samsung tablet lodged in between two seats,” reads the story. But Samsung now has another problem on its hands.

CNN cites a Texas woman who said her Samsung washing machine “exploded with such ferocity that it penetrated the interior wall of her garage”. A woman in Dallas, Georgia, said it felt and sounded as if “a bomb went off.” 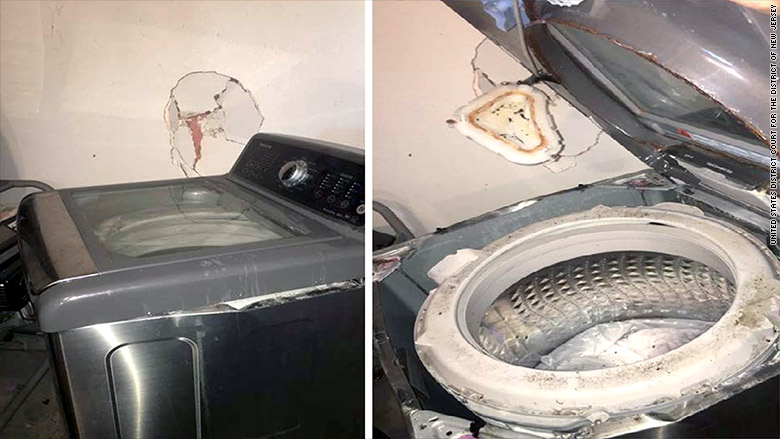 The Consumer Product Safety Commission has determined that the lower spin speed “lessens the risk of impact injuries or property damage due to the washing machine becoming dislodged” and is working with Samsung on a remedy.

A month ago, owners of the exploding washing machines filed a federal class-action lawsuit against the South Korean firm. The lawsuit claims that Samsung “has moved aggressively to collect and destroy all evidence of the defective machines.”