In keeping true to its promise, The Great App Store Purge is now underway as Apple recently began removing old, outdated and seldom updated apps from the App Store, as first spotted by French blog iGen.fr. “We noticed that your app has not been updated in a significant amount of time,” reads Apple’s message to affected developers.

To keep their apps alive on the App Store, Apple is demanding that developers submit updated versions for review within 30 days.

After the 30 days have passed, Apple will remove any outdated apps from the store “until you submit an update and it is approved”.

Any removed apps will remain fully functional for current users who have downloaded it prior to the removal. Users will “experience no interruption to services, will still be able to buy In-App Purchases and can re-download the app while restoring from an iCloud or iTunes backup,” writes Apple. 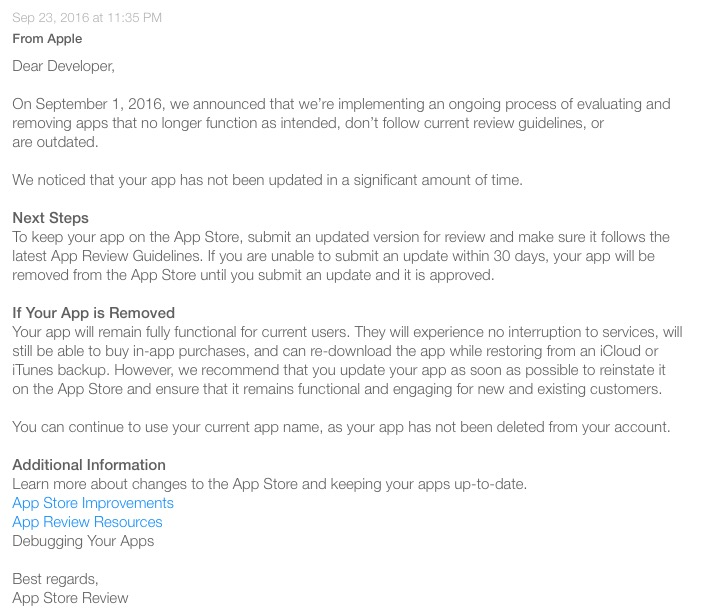 The iPhone maker cautioned on September 1 that beginning September 7 it’d start purging the App Store of poorly maintained apps, zombie apps which haven’t seen an update in ages and abandoned apps that no longer function as advertised.

Apps that don’t follow iOS development guidelines are getting removed, too.

Lastly, Apple is no longer accepting submissions and app updates with names longer than 50 characters because it found that some developers have resorted to using “extremely long” app names in an attempt to influence App Store search results.