New Geekbench benchmark test scores have surfaced online and appear to confirm the rumor that the iPhone 7 Plus comes with 3GB of RAM, the highest amount of memory ever built into an iPhone to date.

Update: The post has been edited for correctness. The iPhone 7 has 2GB of memory according to the benchmarks, while the iPhone 7 Plus has 3GB of memory.

According to the Geekbench benchmark test, which was first pointed out in a report by MacRumors Thursday afternoon, the iPhone 7 Plus that was tested reads out 2998 MB of memory, which equates to 3GB.

One thing that seems questionable in the results are the amount of CPU cores that show up, but as Geekbench’s John Poole says, it’s possible Geekbench just isn’t seeing the additional two cores in Apple’s new “quad”-core A10 Fusion processor because of the way they’re configured as high-power and low-power cores.

Geekbench hasn’t yet been updated with full support for the iPhone 7 or iPhone 7 Plus, and since iOS doesn’t report its processor core amount directly, the software is probably blind to what it’s actually seeing.

Whether or not that adds any credibility to the benchmark tests remains to be seen, but if true, then Apple has really taken the iPhone 7 Plus to the next level in equipped memory.

In another speed test, the iPhone 7 is shown to have 2GB of memory, which means there is a difference between the iPhone 7 and iPhone 7 Plus in terms of onboard memory. 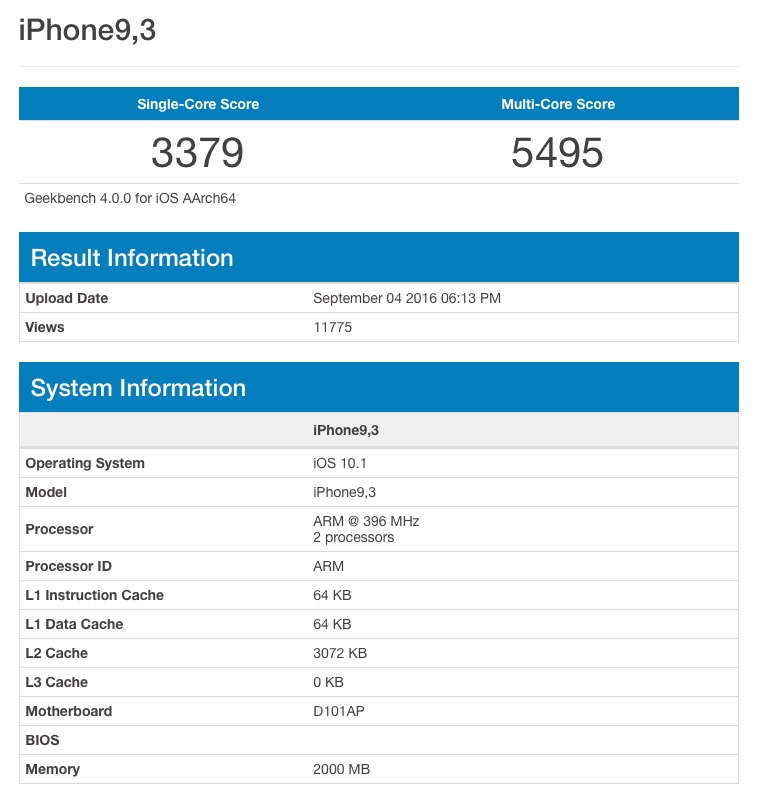 Oddly enough, the screenshot also shows the CPU of the iPhone 7 (not the iPhone 7 Plus) running at 396 MHz, which can’t possibly be correct, and another thing that raises flags is how iOS 10.1 appears in the operating system line. So there are some inconsistencies for sure.

Without a doubt, the iPhone 7 and iPhone 7 Plus are each a monster in performance and these specs are going to make a big difference in overall day-to-day usability of the device, whether you’re a light or heavy user.

Although these sources are typically pretty credible, we won’t know for sure that the iPhone 7 Plus sports 3GB of RAM until the devices start shipping out and a detailed hardware analysis can be performed by experienced teardown teams like iFixit. So we’ll just have to wait until then.

It’s worth noting that Geekbench was recently updated to version 4.0 with new benchmark tests and a refreshed UI. The app can be downloaded from the App Store for free until September 13th, after which it will return to the usual price of $0.99.