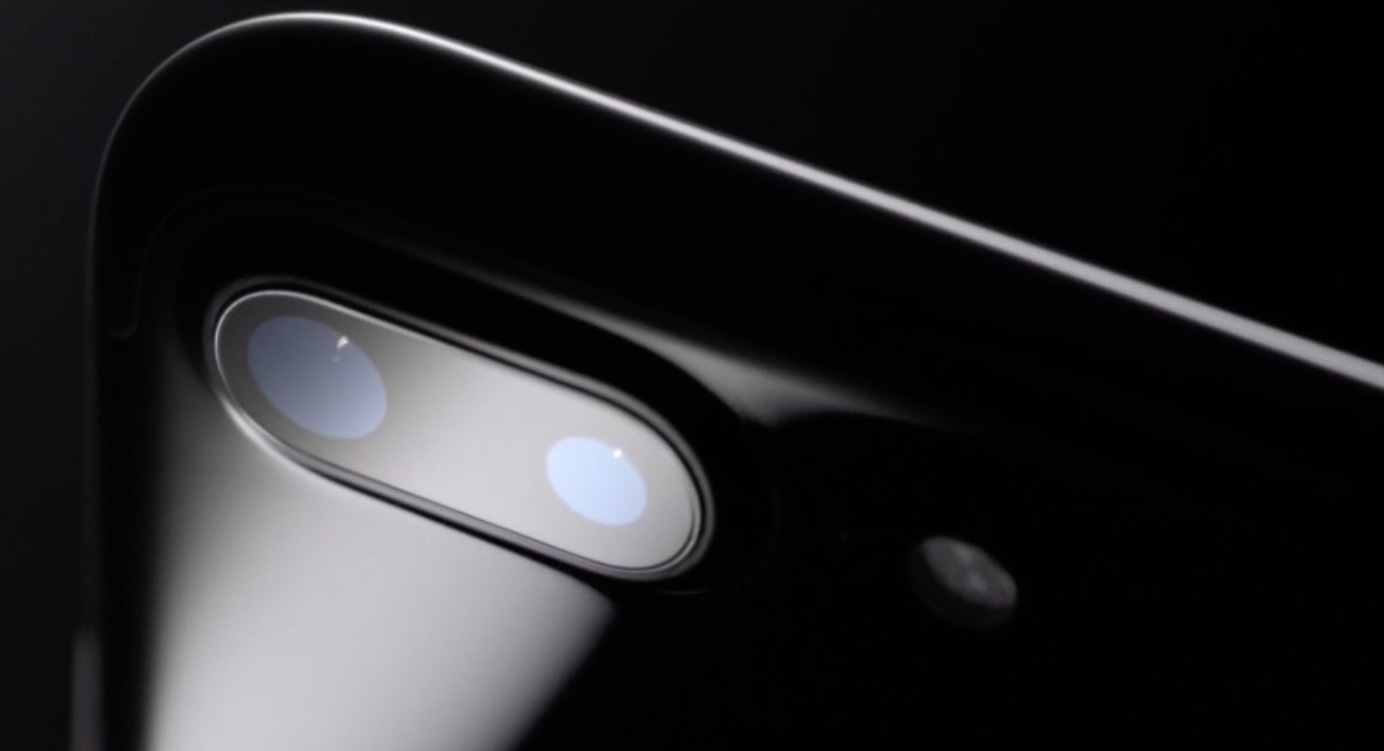 The iPhone 7 is official and it’s got most everything the rumor-mill has been clamoring for: a new high-gloss black colorway (they’re using a new anodization process so we’ll see about the scratches and dings), a dual-lens camera with curved appearance and accompanied by a new four-component LED flash, subdued antenna lines on the back, refined design using cutting-edge manufacturing process, and much more. Developing…

The new high-gloss finish is called Jet Black, but they’re also offering a classic Black appearance that’s matte. As mentioned, it has subdued antenna lines and glossy inset Apple logo. It will also be available in Gold, Rose Gold and Silver.

Apple is also providing a Taptic Engine API allowing apps to create new feelings and experiences when using features like Quick Actions, Messages, Notifications, Ringtones and so forth.

Not just water, but dust-resistant, too

The iPhone 7 honors the IP67 protection standard. What that means is that you can submerge your iPhone in water like your Apple Watch and it’s also protected from dust damage.

Everything about the iPhone 7’s camera system is new.

All iPhone 7 devices now have optical image stabilization and a wider f/1.8 six-element lens that lets in 50 percent more light. The sensor itself is 60 percent faster and 30 percent more efficient and the camera now has a flicker sensor allowing it to remove flickering you see on photos of computer screens or photos taken under artificial light.

Apple’s all-new image single processor built into the A10 chip takes the pain out of adjusting camera settings for you, performing a hundred billion operations per image in just 25 milliseconds. All you need to do is press that shutter button. 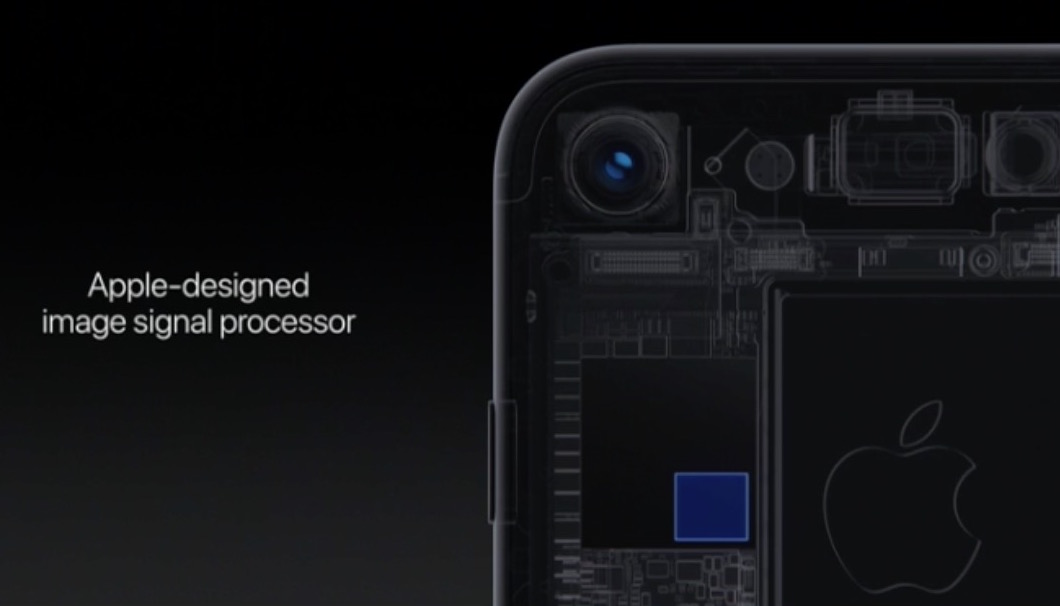 And of course, low-light photography has been improved greatly, and now video image stabilization is applied to Live Photos. As a bonus, developers can capture Live Photos in their apps using new APIs and the iPhone 7 also captures RAW images.

The FaceTime HD camera has gone from five to seven megapixels, captures sharper, wide color images like the back shooter, and more.

As for the iPhone 7 Plus, it’s got two cameras allowing it to do true 2x optical zoom, which uses two twelve-megapixel lenses to get closer to the subject. Of course, you can zoom beyond 2x but even digital zoom (up to 10x) now produces much better images thanks to the dual-lens system than with software zoom. 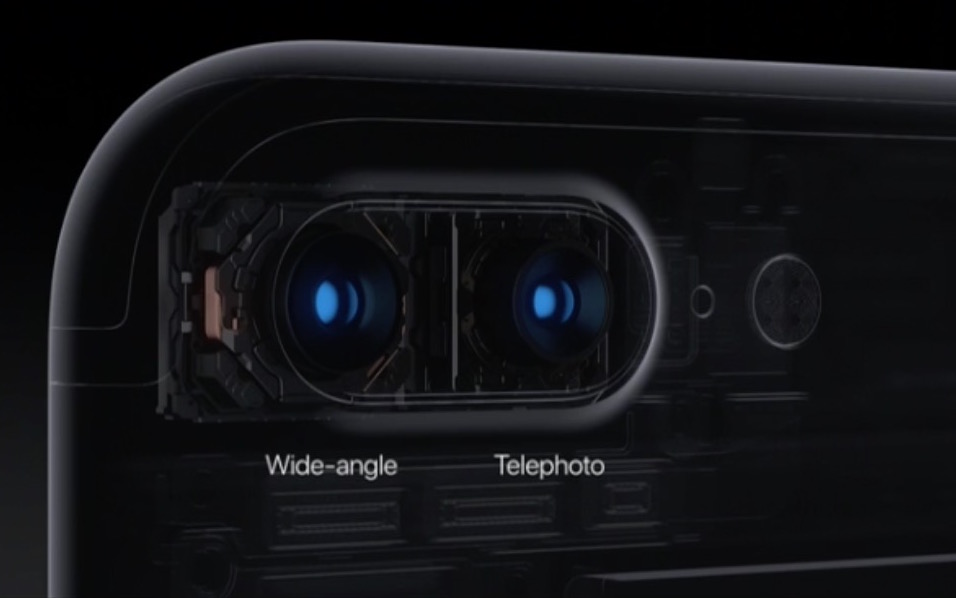 Lastly, Apple’s engineers have created a big breakthrough in photography with the iPhone 7 Plus: the ability to take shallow depth of field images like on DSLRs. When you take an image, machine learning analyzes the image and creates a depth map, applying a bokeh blur in the background while keeping the front subject in focus. 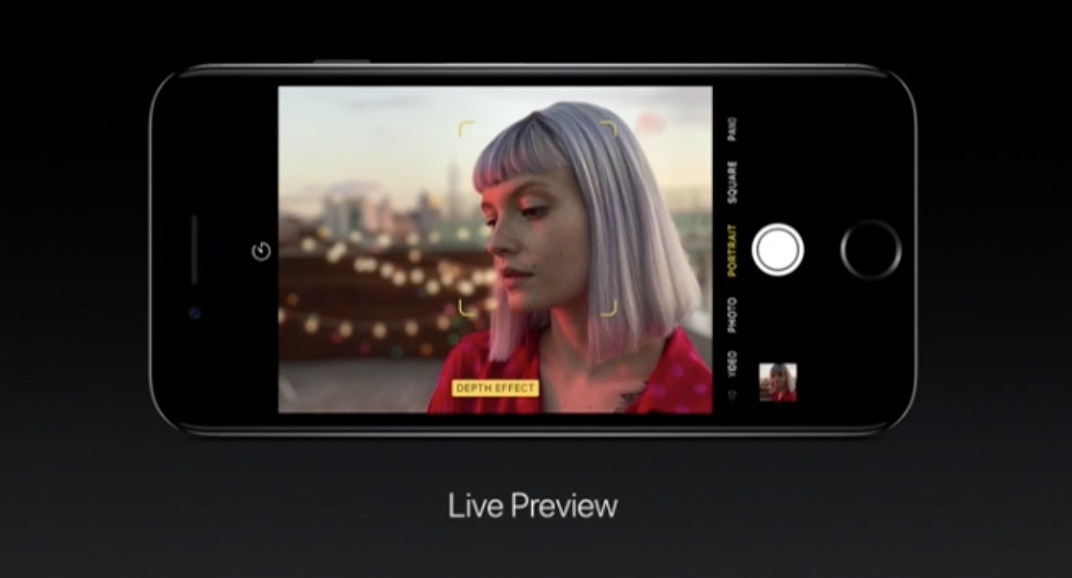 You just select a new Portrait feature in the new Camera app and marvel at real-time deep depth preview before you even tap the shutter button. Of course, the iPhone 7 Plus won’t replace your DSLR, but the amount of work that has gone into the new cameras is impressive.

However, this new depth of field feature won’t be ready in time for launch as Apple said iPhone 7 owners will get it via a free software update later this year.

The Retina HD screens on the new iPhones have seen some hardware improvements, too. The display now shows wide color gamut like that on the iPad Pro and is end-to-end color managed to the cinema standard.

Because the cameras on the new iPhones also capture wide color gamut and taking into account the fact that Photos’ filters are now also optimized for wide color gamut, any images taken with a new iPhone will look stellar on its display. Apple has said that a new version of Instagram app will use Apple’s new APIs to show wide color gamut images.

For the first time, the iPhone has stereo speakers, producing twice the volume versus the iPhone 6s. The other speaker is at the top, meaning you’ll get the best stereo experience in landscape mode.

As suspected, the iPhone 7 ditches the 3.55mm headphone jack. And yes, Apple will include a wired Lightning-based edition of the EarPods, as well as a dongle to connect your legacy 3.55 mm headphones, in every iPhone 7 and iPhone 7 Plus box. Apple has also said that there are more than 900 million Lightning connector devices in the world now. 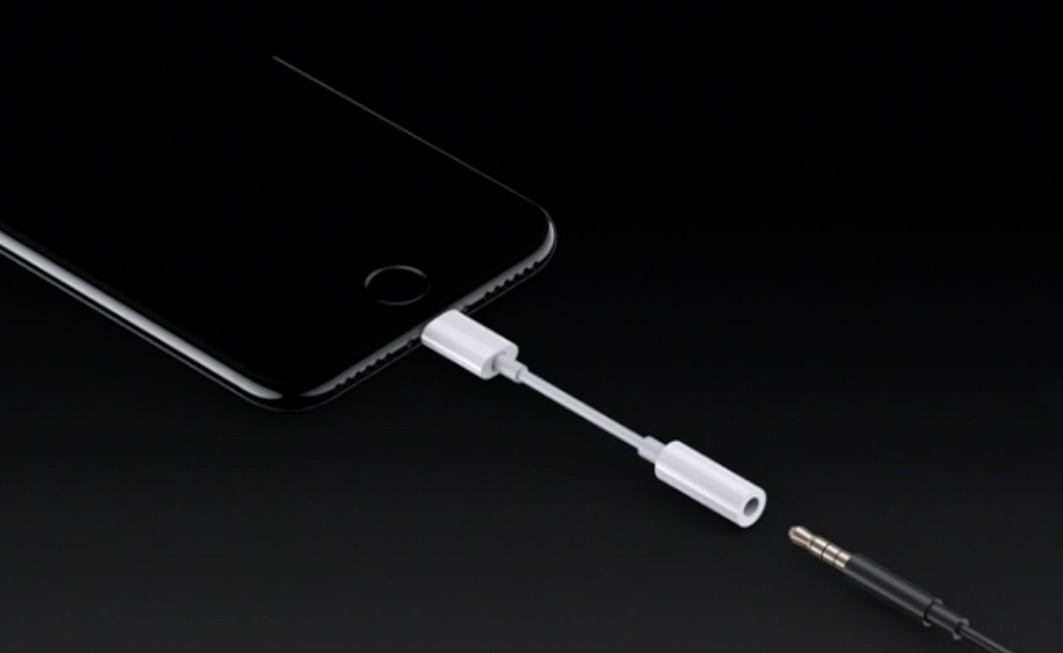 Apple has taken it upon itself to really deliver quality sound to headphones wirelessly while solving some of Bluetooth’s pain points with an entirely new Apple-designed W1 chip built into a new headphones. Yes, you can say hello to the new AirPods.

Designed without any wires to dangle around as you’re working out, each headphone fits inside your ear. The infrared sensor detects when you wear the headphones, automatically turning them on and off. 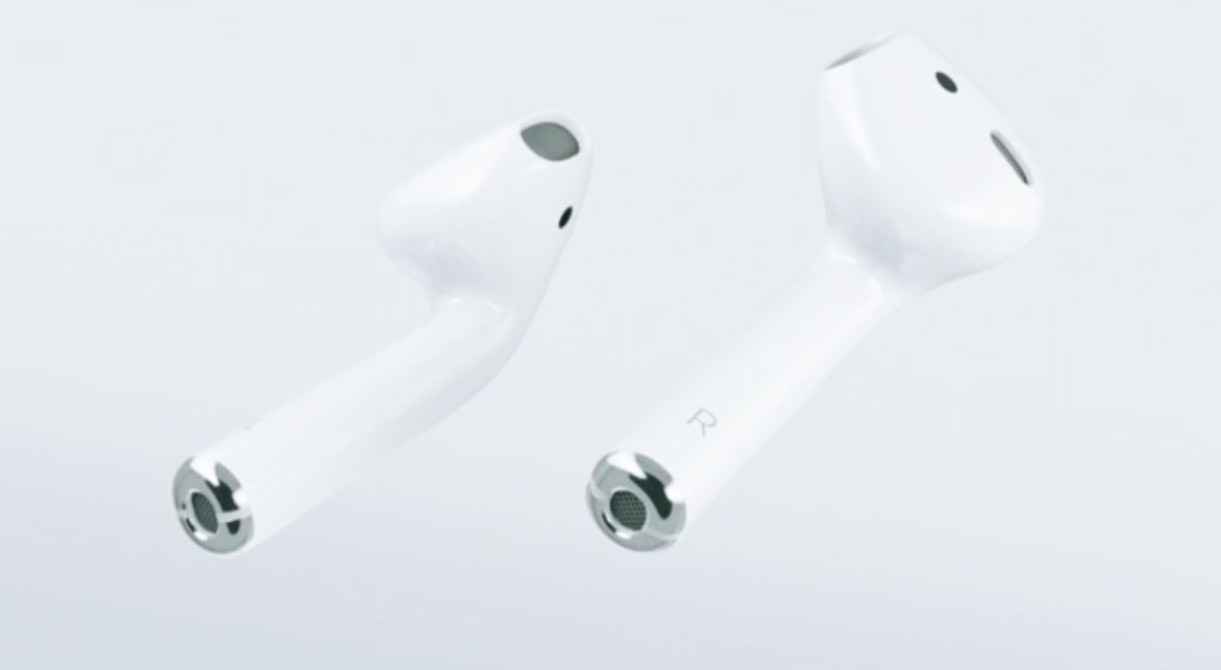 You also get a built-in motion and accelerometer sensor and the accessory responds to touch, allowing you to invoke Siri by double-tapping the headphones. When you’re speaking, it detects the direction of your voice to block unwanted noise from the outside. 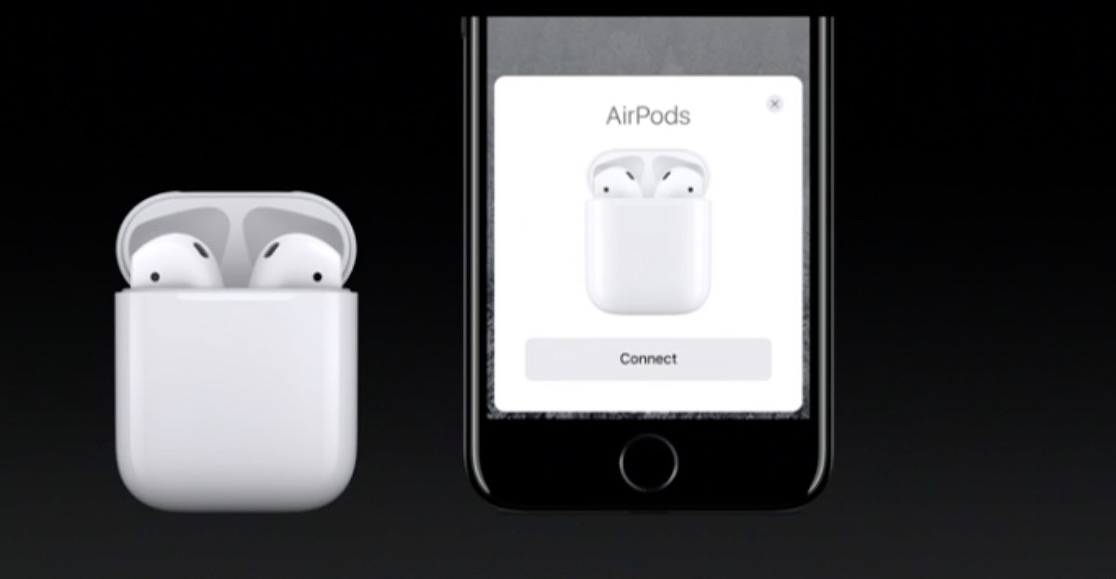 They have a five-hour battery, come in a charging case and there’s no pairing like with Bluetooth (you get 24 hours total run time with the charging case). You just take them out from the case and tap Connect on one of your devices: from that point on, iCloud tells your other devices about the headphones and they just work.

Plus, as you move rom one device to another, headphones automatically switch to the new device so you don’t have to. 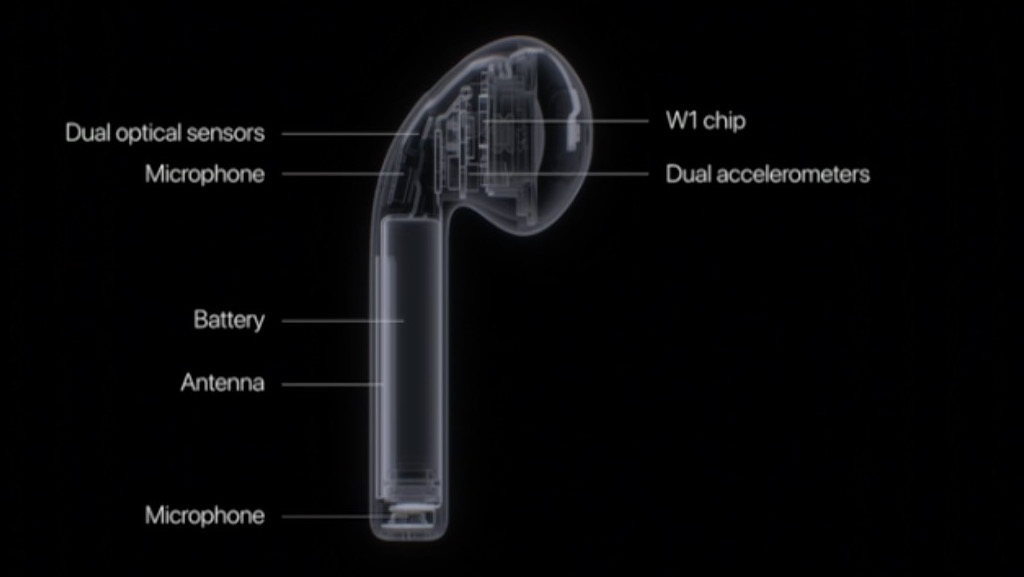 Apple’s silicon team is killing it in performance, but the new phones take that to a whole new level with an all-new Apple-designed “A10 Fusion” chip. It’s got a four-core CPU with more than 3 billion transistors. 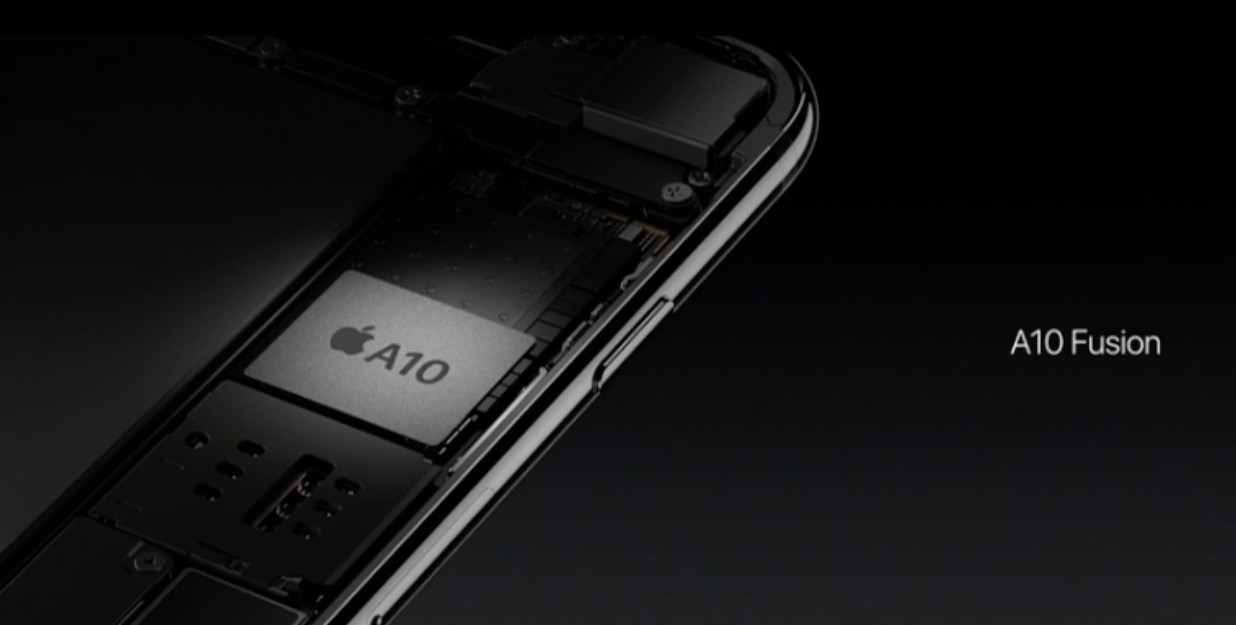 OF the four CPU cores, two are high performance and two are designed with power efficiency in mind. The high-performance cores run 40 precent faster than the iPhone 6s’s A9 chip while the high-efficiency cores kick into action when you do light tasks that don’t require the full power of the CPU, like browsing the web, checking your email and so forth.

These high-efficiency cores run at just one-fifth the power of their high-performance counterparts (which are used for graphics-intensive applications, like games). How does the system know which cores to use?

Well, an Apple-designed performance controller analyzes how you used your device and in real-time determines which cores to use.

Running iOS 10, the new iPhones deliver the longest battery life on any iPhone. On average, Apple said, iPhone 6s users moving to an iPhone 7 can expect two additional hours of battery life per day versus their iPhone 6s. 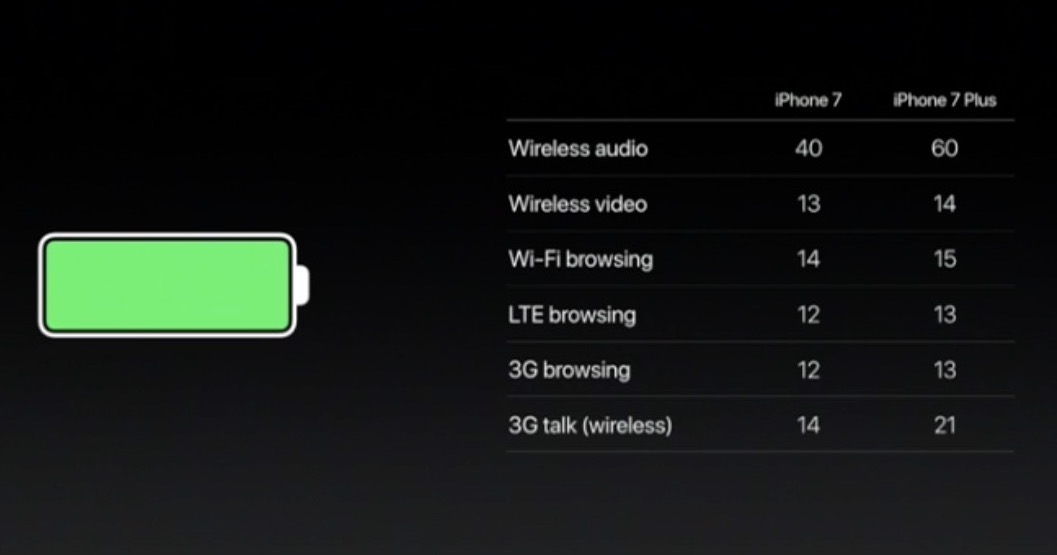 And if you plan on upgrading from an iPhone 6s Plus to an iPhone 7 Plus, you’re looking at an additional hour of run time.

The iPhone 7 starts at $649, just like the iPhone 6s which is now a $100 cheaper, with higher-storage models and the iPhone 7 Plus costing more. As a rule of thumb, the new lineup costs the same as the iPhone 6s family cost before today’s announcement. 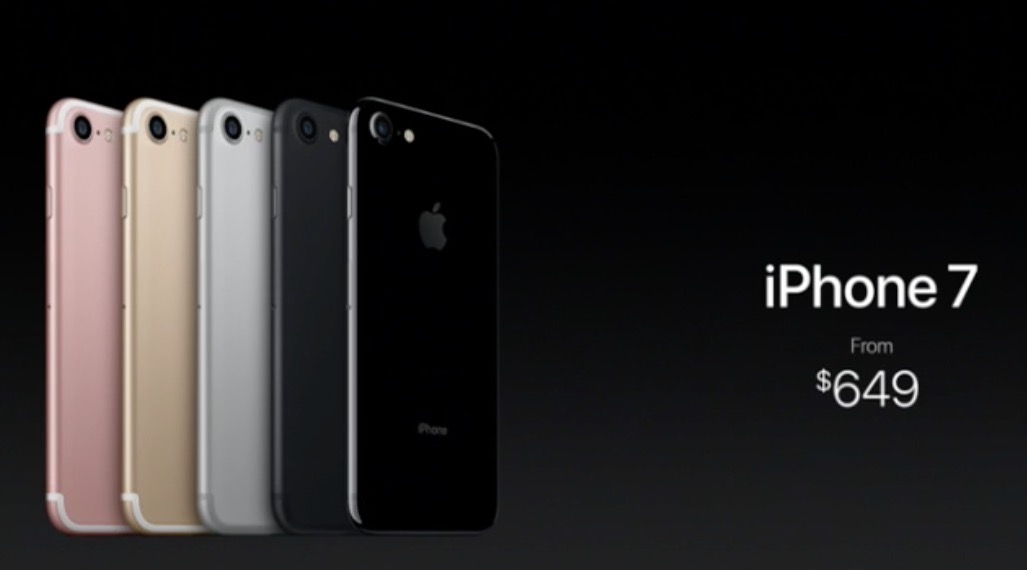 Oh, and the iPhone Upgrade Program has expanded and is now available in the United States, United Kingdom and China to give customers there financing options when buying a new device.

Apple will start taking pre-orders for the new phones this Friday, and they’ll be shipping on September 16 in the United States, the United Kingdom, Canada, Japan, Germany, Italy and select other countries.

One week later, the new phones will hit additional markets. The new AirPods will ship in late October, priced at $159, while iOS 10 will release next Tuesday, September 13. 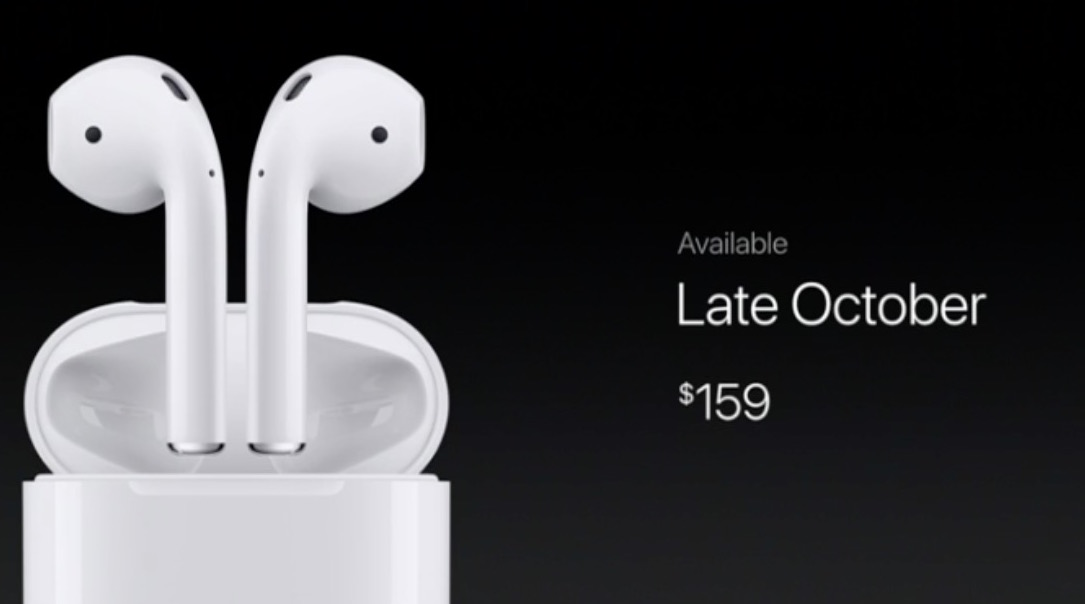 To learn more about the iPhone 7, iPhone 7 Plus and the technologies built into these new phones, read Apple’s press release and see apple.com/iphone-7.

And that, boys and girls, is the new iPhone.