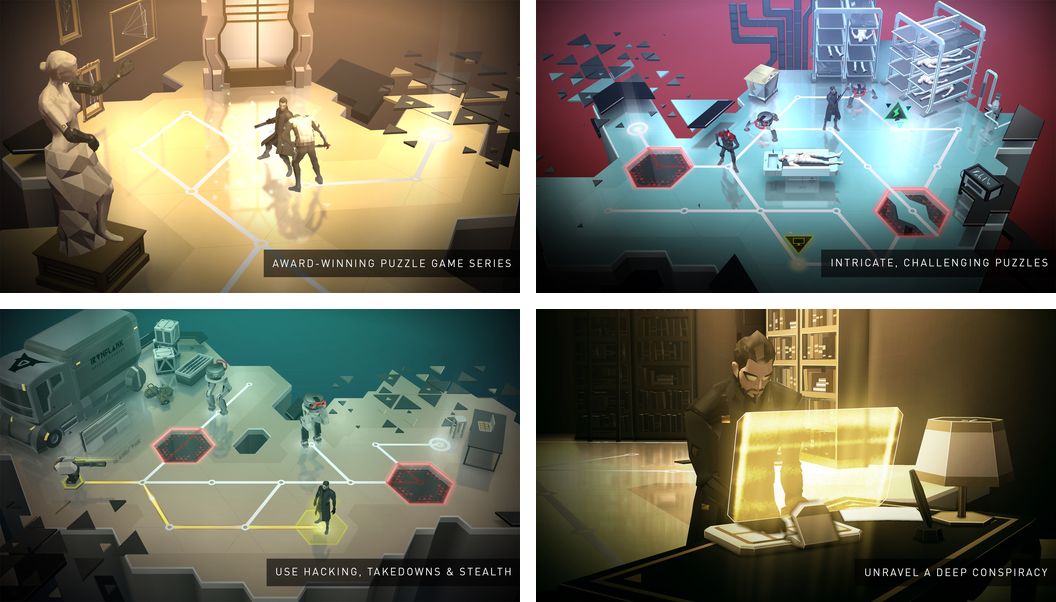 Thursday, Hitman GO and Lara Croft GO [review] creators Square Enix Montréal released their latest premium game on the App Store, Deus Ex GO. A turn-based puzzle infiltration game set in a stylized interpretation of the Deus Ex Universe, it puts you in the shoes of covert agent Adam Jensen. You’ll use hacking, combat and augmentations to solve “the most intricate puzzles of the entire GO series”, according to developers.

In Deus Ex GO, you’ll manipulate the environment and take advantage of Adam’s iconic augmentations to solve the puzzles. Your ultimate goal: unravel the conspiracy behind a terrorist plot in this unique take on a near future dystopian world.

Check out the promotional trailer for the game below.

Deus Ex GO packs in more than 50 story levels and a variety of enemies, like guards, turrets, drones, walkers and more. Additionally, developers are adding a new puzzle every weekday to keep players coming back for more.

If you haven’t played any of the GO games, you should do yourself a favor and give one a try. Assuming you like puzzlers that challenge your gray matter, you’ll be pleasantly surprised how addictive and nicely done these titles are, especially Lara Croft GO.

Like other GO titles, Deus Ex GO is a premium App Store release which contains no in-app advertising and does not require any In-App Purchases.