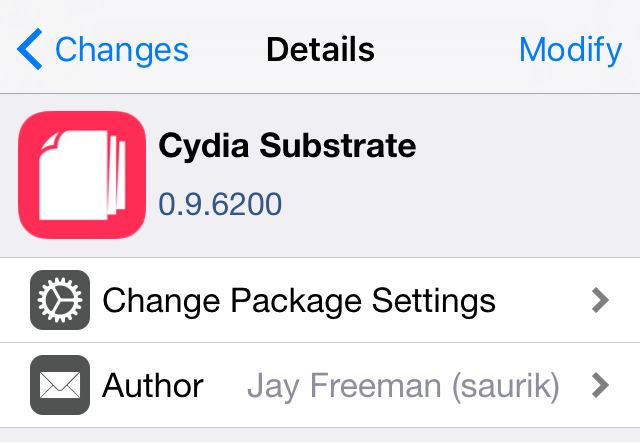 Saurik has released an update for Cydia Substrate on Thursday that brings the package up to version 0.9.6200.

If you’re running the latest jailbreak for iOS 9.2-9.3.3 from Pangu/25PP, then this update is a must-have for you.

One of the first things Saurik discusses in the change log is a problem with the iOS 9.2-9.3.3 jailbreak and storage. As it turns out, there appears to be a storage problem on this jailbreak, and the Cydia Substrate update will help “mitigate” the problem. Yes – mitigate. It appears that this will not fix the problem fully, and it’s unknown whether or not it ever will.

To mitigate the problem, Saurik is now stashing the installation target of extensions, which essentially means that it’s trying to save you storage space by controlling where your jailbreak tweaks are installed.

If you installed any other extensions from Cydia to fix this issue, such as a workaround released by iOS developer Coolstar, then many people are actually recommending removing the extension before updating Cydia Substrate.

Another change in the update is a bug fix for a problem where function hooking into all versions of Cydia Substrate could cause issues on the device itself, such as instability.

Most importantly, Cydia Substrate now supports the No Substrate Mode on iOS 9.2-9.3.3, which is an invaluable feature for when your devices bug-out due to a jailbreak tweak and you want to boot up without any extensions so you can remove the troubled one.

Saurik explains that the process to get into No Substrate Mode on iOS 9.2 and later is to press and hold the volume up button while using the jailbreak app from Pangu after the device has already booted, which means that the process has changed a little since previous versions of iOS.

The changed process is likely due to the fact that the jailbreak is semi-untethered and only works after the device has been booted and then activated into a jailbroken state through the Pangu app. Since the jailbreak is already disabled after a restart, it wouldn’t do much to try and use the volume button trick immediately following an attempted reboot.

Saurik notes in the Cydia description that all the added support for iOS 9.2-9.3.3 should not cause any issues with using Cydia Substrate on previous jailbroken versions of iOS, such as iOS 9.1 and earlier, but if you do notice any problems, let him know via email as soon as possible so he can look into it and try to hammer out a fix.

The updated Cydia Substrate is recommended for all who have jailbroken iOS 9.2-9.3.3 with the new Pangu jailbreak for Windows, or via the Safari method. Although the Safari method seems hit-or-miss right now since Apple has started issuing certificate bans for misuse, the Windows method seems to be the only stable jailbreak method at this point in time.

How is the jailbreak running for you following this Cydia Substrate update? Let us know in the comments!