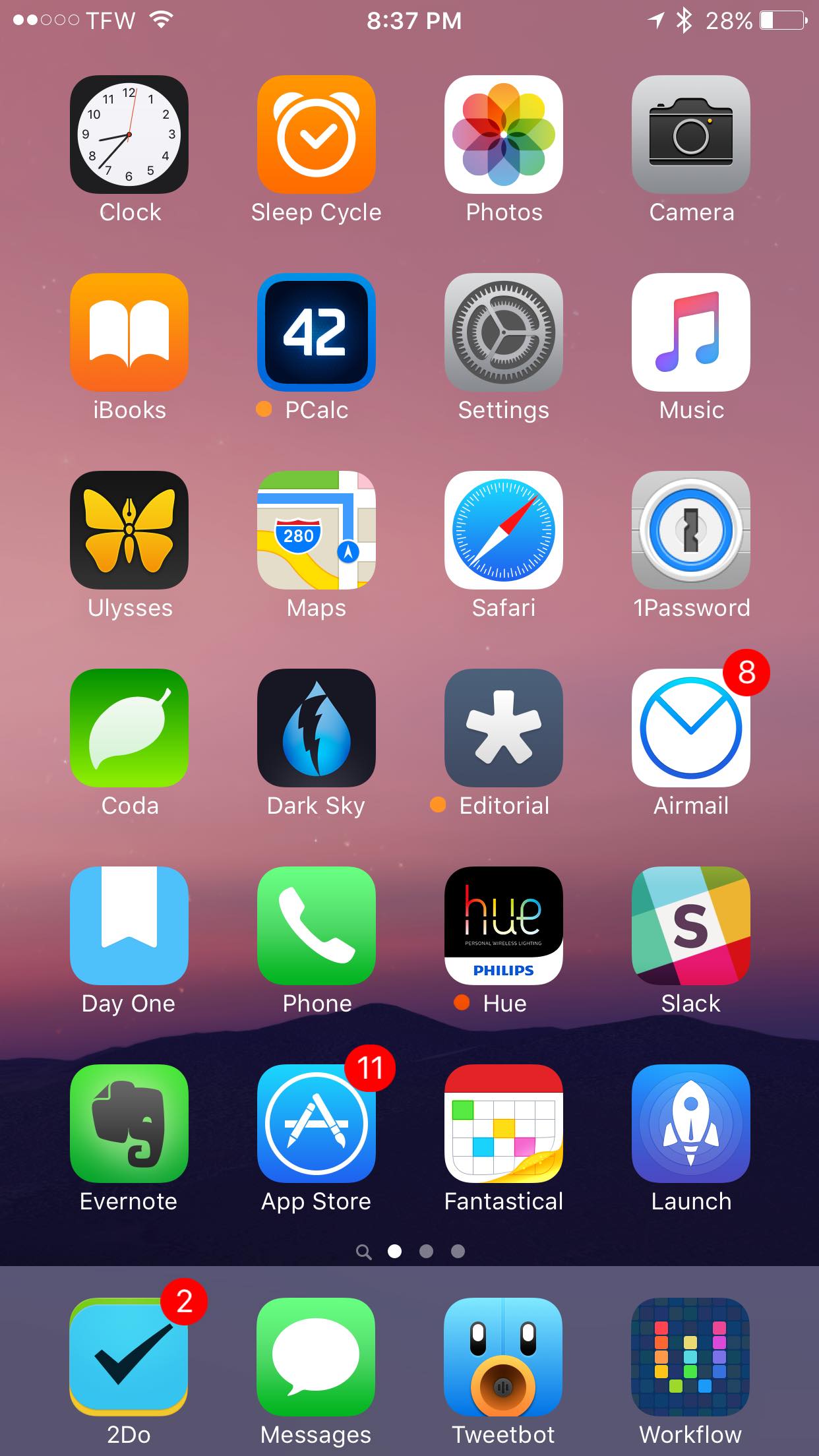 One of the things I see the most every single day is most certainly the Home screen of my iPhone. Because my phone is with me wherever I go, and because it’s the device from which I consume the majority of content, the first page of my Home screen is at the forefront of my digital life. Naturally, then, the apps that reside on this page are to be chosen rather carefully to maximize efficiency throughout the day.

Sometimes, though, I have an app on my first page because I want to use it more often, not necessarily because I do. An example of this would be Day One, a journaling app that I never remember to use at the right time and that I keep handy on my Home screen to encourage its use.

I do have a second screen of apps but won’t be covering it here, as it’s generally a mess of categorized folders and recently downloaded apps that I have yet to tuck away. I previously kept a folder or two on my first page but have removed them in favor of minimalism. Apps occasionally move to my first page when they’ve earned my respect, but I generally keep all social media apps aside from Tweetbot on my second page in order to discourage their use at least somewhat.

Because my current device is an iPhone 6s Plus, it’s not easy to reach all of my apps with one hand, which is why the apps I tend to use the most are lower and further right on my Home screen to increase ease of access. Apps I use less frequently or that I usually open when I have both hands available (such as when turning on Sleep Cycle at night) are further away.

I also like to take advantage of 3D Touch to increase the number of apps I can access from page one by using Launch Center Pro’s shortcuts to quickly launch other apps that I’d rather stick into folders. Launch Center Pro’s ability to use deep links to launch into specific menus of an app makes this particularly useful. Also, Workflow has similar functionality that allows me to quickly invoke workflows that can not only launch other apps but perform actions that often making launching those apps unnecessary. I previously shared ten ways to put workflow to work, and many of these work very well with 3D Touch Quick Actions.

Clock: although I don’t use the app regularly, I like to keep it on hand for the times when I need a backup alarm or want my music to shut off after a certain time. In these instances, I’m not likely to want to dig around my folder of stock apps to find Clock.

Sleep Cycle: an excellent app for tracking sleep patterns that ties in with iOS’s Health app and doubles as an alarm clock that wakes you when you’re in your lightest sleep. It can even use Philips Hue lights to gently pull you out of a deep sleep as the alarm time nears. – free

Photos: a rather obvious use case, I like to always have my photos on hand, whether I need to quickly show something to a friend or grab a screenshot for iDB.

Camera: again, I want instant access to my camera for quickly snapping pictures. While I have some excellent third-party camera apps on my second page, the stock camera’s speed and features such as Slo-Mo and Burst Mode keep me using it as a default.

iBooks: I used to love reading as a kid to the point of consuming an abnormal amount of books in a disturbingly short period of time, but unfortunately that has waned as my interest in technology has grown. Still, I keep iBooks around as a reminder to occasionally make a little progress in that book I’ve been meaning to finish.

PCalc: having a calculator a tap away is always handy for those times when you can’t ask Siri for whatever reason, and PCalc does a great job of going above and beyond the capabilities of the stock app. – $9.99

Settings: as I recall, this app has never left my Home screen in all of my mobile days due to its necessity when connecting to a new Wi-Fi network, choosing a Bluetooth device, etc.

Music: which music app I have on my first Home screen has been juggled between the stock app, Spotify, and even Amazon Music, depending on which I used more at the time. Now that Apple Music introduced a student discount, the stock Music app is back in its rightful place.

Ulysses: as someone who tends to deal with words a lot, we’re going to be talking about more than one writing app today. Ulysses is a great environment for a variety of use cases, and I like it particularly for its synchronization with Ulysses for Mac. I expounded more on its capabilities in a previous article. – $24.99

Maps: although I don’t use this app particularly often, the times I do need it are times when I don’t want to hunt for it, which is why it’s always on my Home screen.

Safari: no explanation needed – a Web browser is a staple of anyone’s digital life, and I’ve never felt a real need to ditch it in favor of a third-party browser.

1Password: here I store the keys to my digital (and even some physical) property. 1Password is an incredibly useful and well-built app, and you must download it if you haven’t. – free

Coda: because I love Web development, I’ll occasionally tweak or continue working on a website from my phone when not much is going on or when a site needs a quick edit. Coda combines a great text editor environment with an FTP client, and with a few other features thrown in, it’s a must-have for both my personal and freelance work. – $9.99

Dark Sky: while I don’t really have any outstanding complaints with the stock weather app, I’ve been giving Dark Sky another run to see if I like it decidedly better. Although I’m not one to constantly check the weather, it’s one of those apps I like to have on hand when I can’t ask Siri about the forecast. – $3.99

Airmail: I’ve gone through quite a few mail clients in my time, but Airmail has been serving me quite well lately, as it’s very much a mail app for power users. An incredibly useful tool, I’ve yet to come across another mail app that includes as many features as this one. – $4.99

Day One: as I previously mentioned, Day One is an app that I want to use but don’t always make myself use on a regular basis, which is why I keep it on my Home screen as a reminder. An excellent journaling app, Day One is due for an encryption update soon which will be the icing on the cake for me. – $4.99

Phone: I, for one, do still make traditional phone calls regularly, which is why this app is used fairly often. With 3D Touch, I can also quickly add a new contact in the app, which pushed my Contacts app to a second page folder long ago.

Philips Hue: this is where I control the lights in my bedroom as well as some other rooms in the house. Instead of having to walk across the room to turn off my lights, I can simply open the app, access the Notification Center widget, or ask Siri to do it for me, and it’s a true luxury. free

Slack: a team communications app, Slack helps the iDB team keep in touch and operate smoothly. It’s the main way I talk to Sebastien or anyone else on the team. – free

Evernote: I use this app more often on my iPad, but Evernote is my go-to for long term note-taking and storage. Although I tried OneNote for a while, Evernote’s simplicity and integration with other great iOS apps brought me back eventually. – free

App Store there’s little to say about this that’s different from anyone else. I like apps.

Fantastical: an excellent calendar app for managing my calendar events. Its natural language input makes it the best I’ve tried, and its flowing design has me scrolling well into the past and future just for fun. – $4.99

Launch Center Pro: as I mentioned earlier, I use this to quickly launch other apps or specific parts of other apps. It can even ask for input and fill out a specialized Day One entry for logging a conversation I want to remember or a few details about the day I’ve had. An all-around great app if you put some time into configuring it. – $4.99

2Do: my favorite task manager of all time (and I’ve been through quite a few), this app has everything I could ever want in a to-do list. I can’t begin to express how much I love this app and its integration with other apps, so you’ll just have to find out for yourself and download it. – $14.99

Tweetbot: despite there being plenty I’d change about this app or add to it, Tweetbot 4 is still the best Twitter client out there in my opinion, and it’s probably the most used app I have. Oh and, shameless plug here, if you aren’t following me on Twitter, you should consider fixing that. – $9.99

Workflow: last, but certainly not least as the bottom right of my screen is prime real estate, is Workflow, the app that can do everything from combine images to shorten links to upload media and articles to WordPress for iDB. I’ve spent many hours building and tweaking workflows for my own use and even the use of the iDB team, and it’s one app that has always had a front row seat on my Home screen. – $2.99

Once I find a minimal wallpaper that gets out of the way and compliments my apps well, I usually keep it for months at a time, and this one is no exception. This particular image is the stock wallpaper that shipped with the first test version of Android N, and you can grab this wallpaper for yourself here.

So what does your Home screen look like? The comment section is open for sharing your setup with us and other readers.