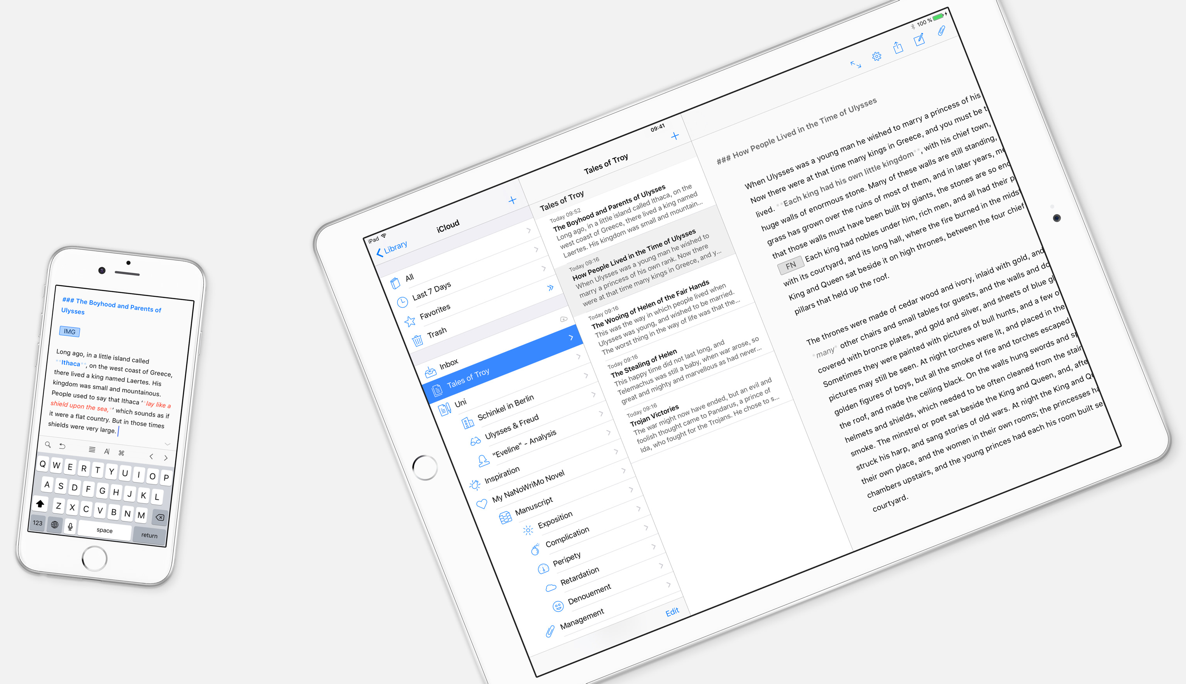 As a writer, I’m always on the lookout for new apps that will help with the creative process and enable me to get work done more quickly and efficiently. I’ve gone through a variety of different apps on both Mac and iOS that provide their unique and not-so-unique feature sets in search of the ultimate writing tool.

With the power of iOS 9 on iPad, my goal has been to find a solid app that would give me the freedom of mobility while still syncing my thoughts and work to my Mac for those articles that only a physical keyboard could conquer. Today, I have found a solution that meets these goals in the form of Ulysses.

Although it’s existed for a while as an iPad and Mac app, Ulysses has officially made its debut on iPhone, bringing its feature set to pocket-sized screens. If you’ve used Ulysses on iPad or Mac, the iPhone edition will feel comfortably familiar. If you’re completely new to the Ulysses line of apps, I recommend it as the best hardcore writing app I’ve used that is available on both iOS and Mac.

By hardcore, I’m referring to its heavy Markdown support and HTML conversion, detailed word, character, and paragraph count with reading time estimations and word count goals, and highly customizable sharing options. It has most of the features journalists and bloggers would want in a writing app, and its synchronization with the Mac client is a significant feather in its hat.

I had the pleasure of beta testing both the iOS and Mac apps prior to Ulysses’ debut on iPhone, and I’d like to share some of my thoughts in a review of sorts. While I can’t possibly cover every feature in a reasonably compact article, I’ll try to highlight a few of my favorites for your consideration. These features should be similar in implementation no matter if you’re on a Mac, iPad, or iPhone, so I’ll stick to iPhone screenshots. 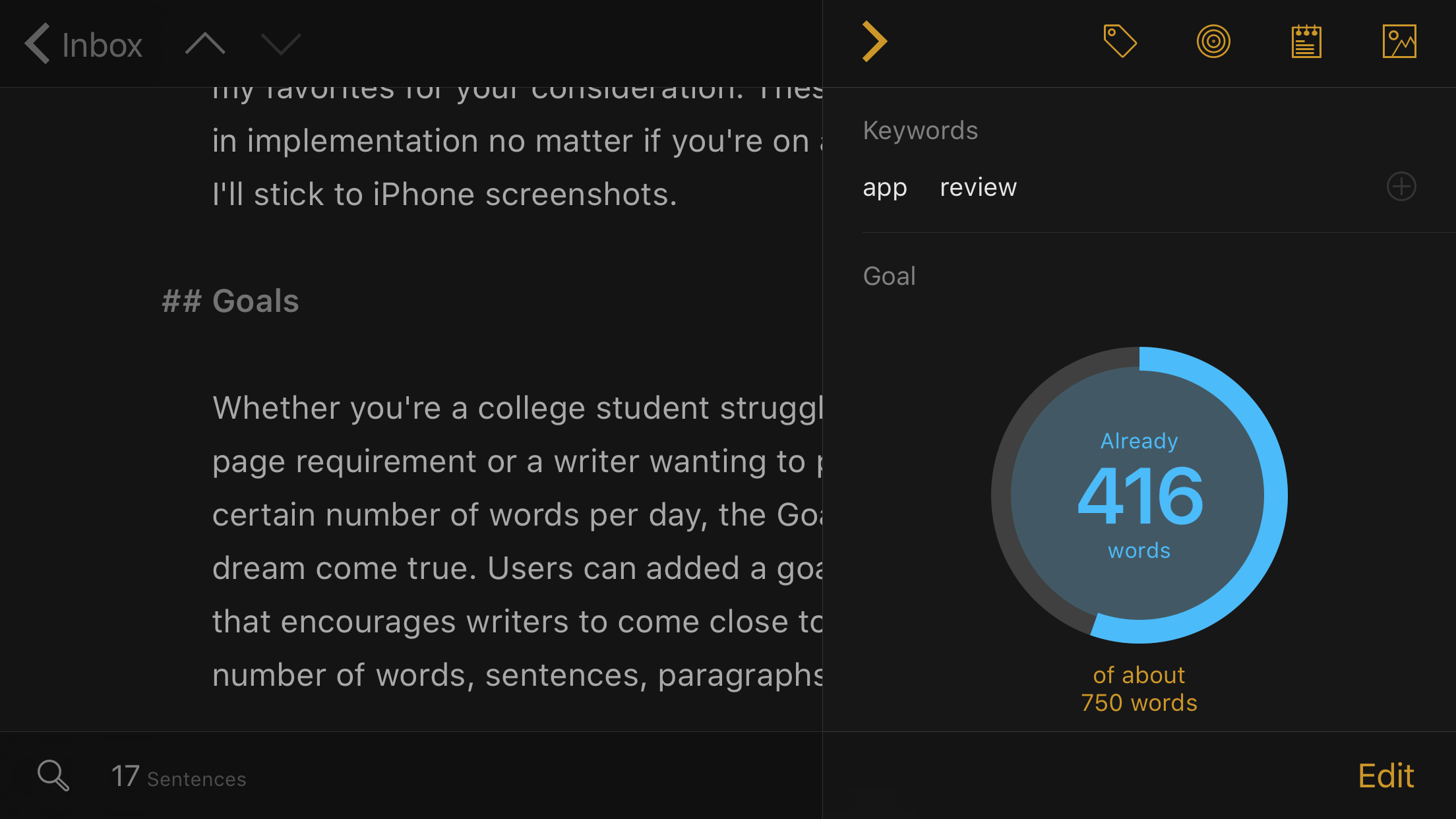 Whether you’re a college student struggling to meet the minimum page requirement of an assigned essay or a writer wanting to pace yourself by writing a certain number of words per day, the Goals built into Ulysses are a dream come true. Users can add a goal in the Attachments pane that encourages writers to come close to, pass, or stay within a number of words, sentences, paragraphs, lines, or pages. Progress toward completing the goal is displayed in a circular graph that helps visualize how much further there is to go. 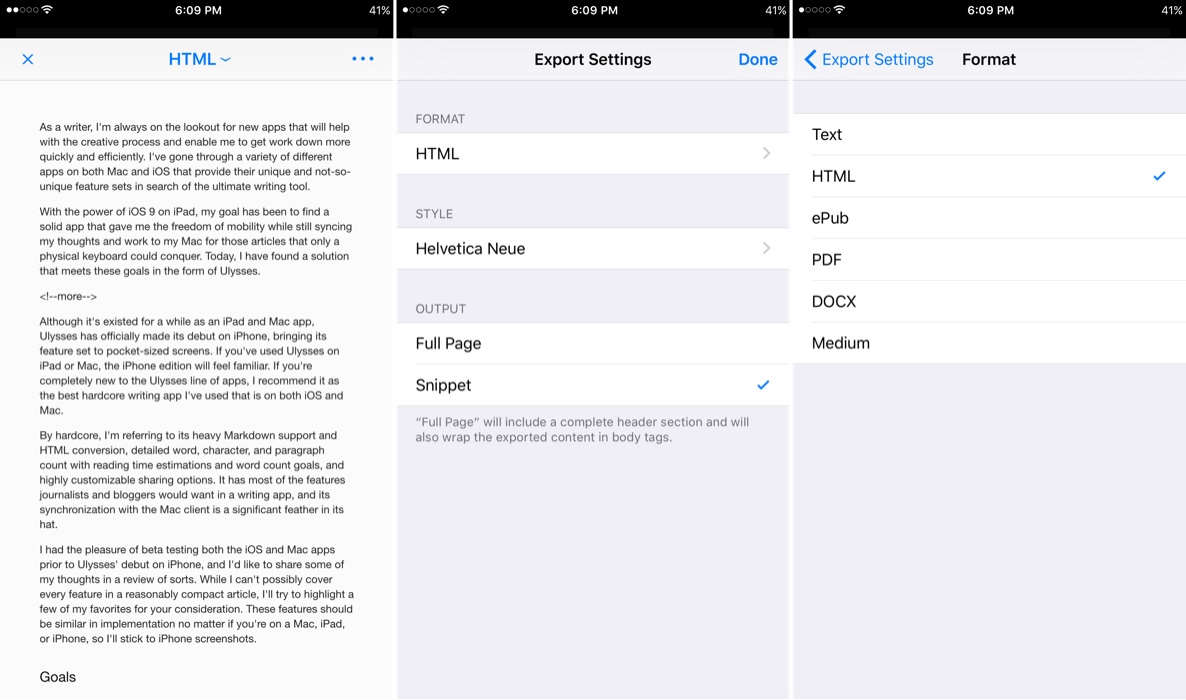 The majority of my writing that takes place within apps rarely ever stays inside those apps, which is why the ability to quickly convert my work from Markdown to HTML and export it for publishing is vital in any writing app I use.

Ulysses offers exporting in several formats including PDF, ePub, HTML, and of course plain text, among others. Support for publishing directly to Medium is also included, but what I would be absolutely thrilled to see is WordPress support, as it’s the platform on which the majority of blogs are based. Still, the formats currently supported are both useful and customizable to your needs. 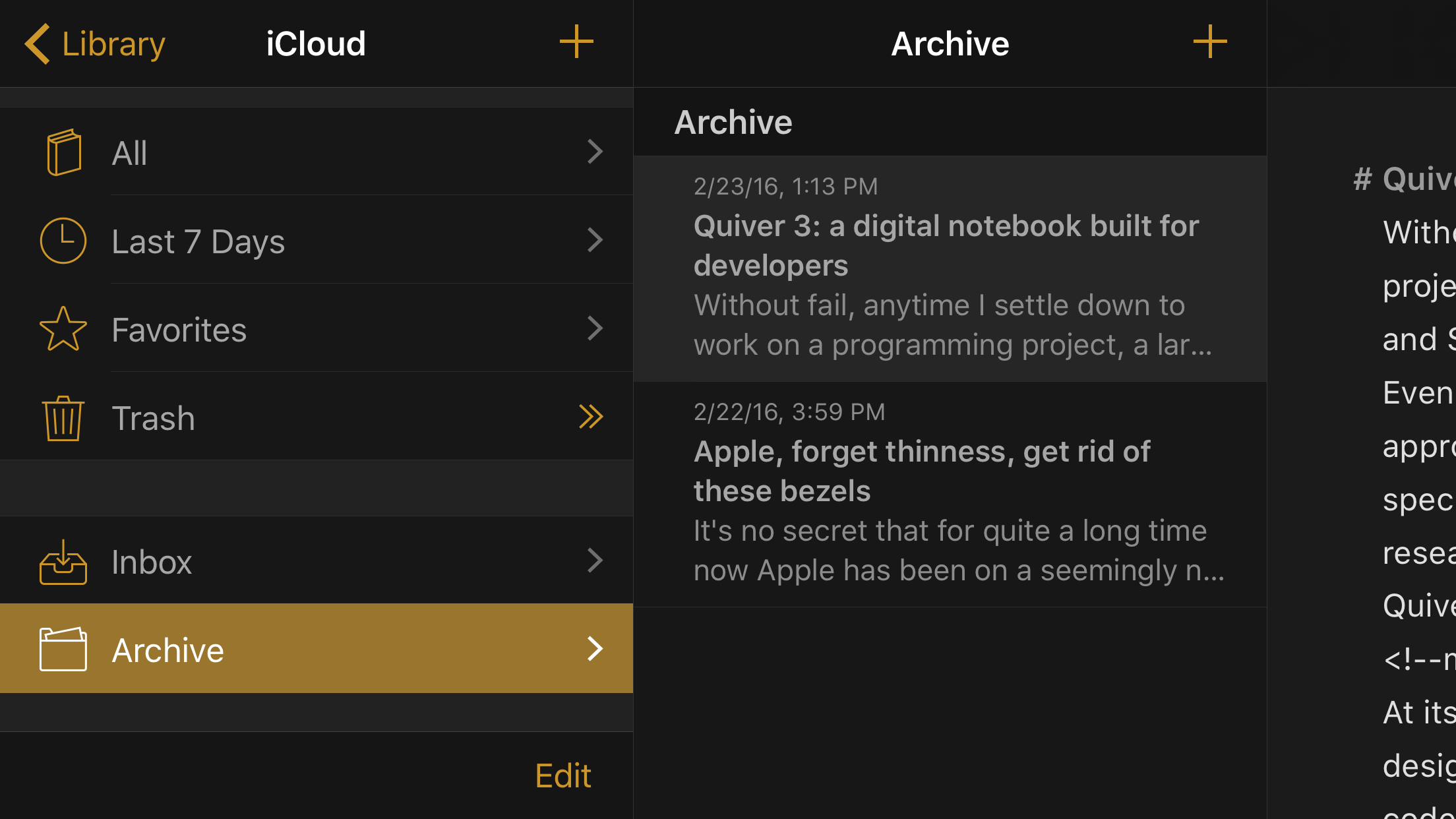 Organization is key in any workflow, which is why I value the folder structure in Ulysses. Within the domains of iCloud sync, folders can be created to organize documents based on topic, blog, or progress.

In my case, I currently just use two folders – Inbox and Archive. Though it would be nice if Ulysses had a built in archival system, this workaround functions well by allowing me to move completed articles to the Archive folder while leaving current projects in the Inbox. This way, my Inbox only contains articles on which I’m actively working, but I can still refer back to published posts. 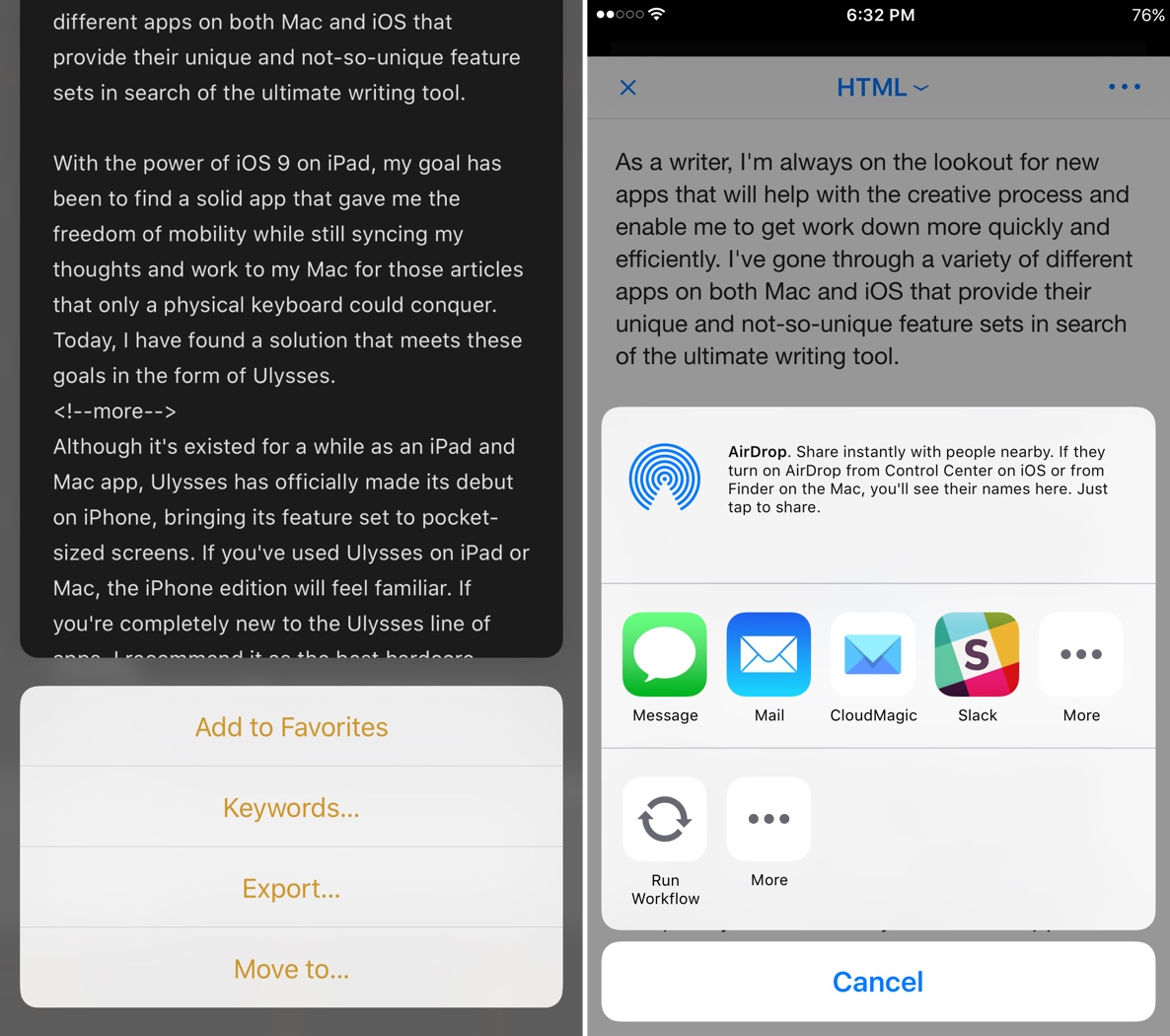 Soon after its iPhone launch, The Soulmen released an update with X-Callback URL support, enabling other apps to interact with Ulysses across iOS. Users can now take advantage of Workflow and similar apps to append text to sheets, add attachments, and send full HTML, Markdown, or text to Ulysses. For iOS power users, automation is a significant factor in the decision to use an app as a daily driver, and support for this kind of flexibility in Ulysses is an important feature.

There are many more aspects of Ulysses to explore, as it offers a serious package of features that go beyond the simple distraction-free text editors with Markdown support. Of course, Ulysses still has the option of going into a distraction-free mode, but users can also choose to keep their tools visible and easily accessible. The UI can fade into the background, or it can display pertinent information.

Ulysses is one of those apps that has something for everyone. Students will appreciate the word and page count goals while journalists can make use of the exporting and cloud sync. Ulysses Mobile is available in the App Store as a $25 download with the iPhone update being free for existing users, while Ulysses for Mac comes with a $45 price tag. Although premium software, Ulysses is an incredibly well-built app with much to offer the serious writer.