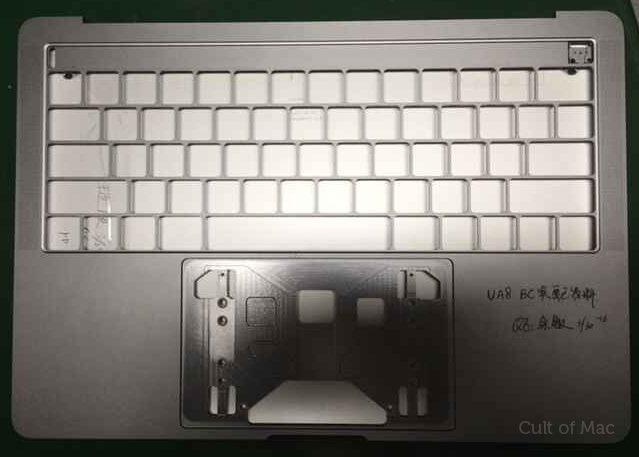 New images surfaced on Tuesday of what is said to be a chassis for Apple’s upcoming MacBook Pro. Cult of Mac says they were sent the photos by “an anonymous source who claims to work for one of Apple’s manufacturing partners in China,” but that of course cannot be confirmed.

The so-called spy shots are interesting because there’s a noticeable gap in the laptop chassis, just above the keyboard. The oddity lines up with a recent investor note from prominent Apple analyst Ming-Chi Kuo, which called for this year’s MacBook Pro to feature an OLED touchpad.

While long overlooked, the MacBook line is the brightest spot for Apple’s 2016 rollouts. This is particularly true of the two new MacBook Pro models, to be introduced in 4Q16, as they will have a thinner and lighter form factor, Touch ID, use OLED display touch bar (to replace physical function keys, located above the keyboard) and adopt USB- C / Thunderbolt 3.

Other than the mysterious keyboard slot, other details we can glean from the images include what looks like 4 USB-C ports, a headphone jack, and thin speaker grills on either side of the keyboard. It’s hard to tell if this MacBook Pro is thinner than its predecessor, but if it is, it’s not much.

Early rumors suggested that Apple could unveil its new MacBook Pros at WWDC, but Kuo says they won’t be ready until Q4.