If you’re trying to use an iPhone, iPod touch, or iPad, only to find that the display is black and the device won’t power back on, it could be happening because of a variety of different reasons. The only way to know why it’s happening for sure is to troubleshoot.

In this piece, we’ll attempt to discuss the various reasons why this could be occurring to your iOS device(s), and some potential workarounds to get you back into the device if it won’t power back on.

Why is my screen black and my iPhone not turning on?

There are a number of reasons why your iPhone, iPod touch, or iPad might have a black screen and isn’t turning on. Any of the following reasons can be the root cause:

Typically, a dead battery is the most common of these problems, and total iOS corruption is typically the least likely in most cases, but I have seen times when an iOS glitch has completely locked the user out of the device and special measures were required to get the device up and running again.

Getting your iOS device up and running again

Now that you’ve stumbled upon this information on why the problem could be happening, you’re probably wondering what you can do to get your device up and running again so you or the true owner can start using it again. If so, you can always try these steps:

If the screen is black, and pressing the power button or home button doesn’t wake the device, it may just be powered down.

In this scenario, all you need to do is press and hold the power button on the device until you see an Apple logo, and at this point, the device should start to boot back up. If it doesn’t, try the next step.

If a soft reboot doesn’t work, try a hard reboot. In a hard reboot, the power from the battery is disrupted, allowing all of the system’s memory to be drained and to start back up in a completely fresh state of mind. This method is successful most of the time, unless the battery is kaput or a serious problem is afoot.

To perform a hard reboot, you can press and hold both the Home button and power button at the same time for 10 seconds, or until you see an Apple logo appear on the screen.

Note: Hard reboots are also very effective if the iOS device is frozen on a screen and is unresponsive to your touch screen input.

No Apple logo? Keep moving on…

Try giving it some power

If the screen remains black after both of the above suggestions, then it’s most likely out of juice. If an iPhone’s battery gets too low, you’ll usually see a low power icon on the screen, like the one below: 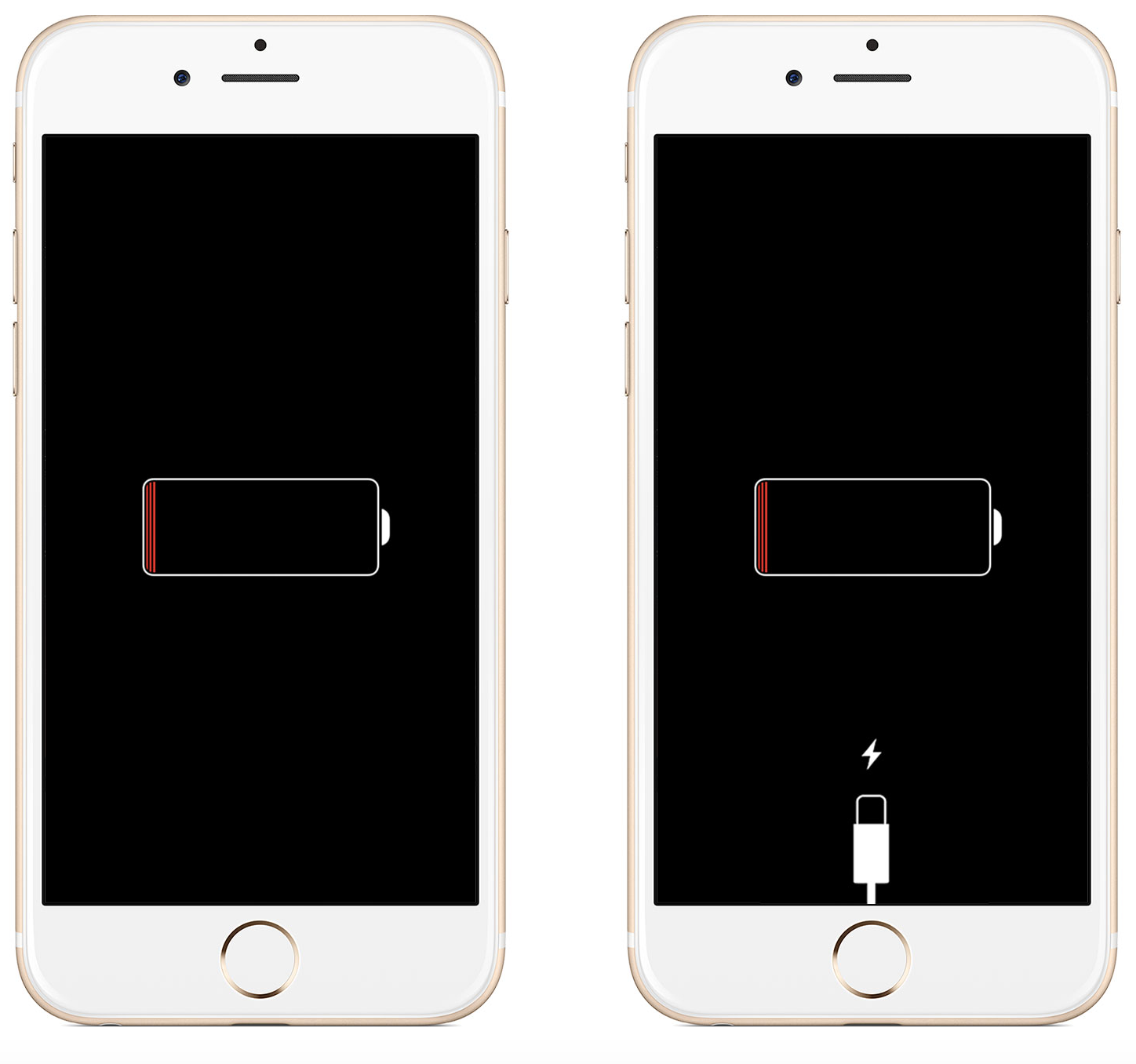 On the other hand, if the battery level gets low enough, the device may not even have enough power to alert you that the power is too low. In this case, the device’s screen will stay black no matter what you do because there’s no juice to turn the screen on.

If a hard restart didn’t work, you can check to see if a dead battery is your problem by plugging the device into a power source for at least 1 hour. This will give the device some time to collect a charge and reinitialize. When it gets some power, you should at least see the low battery icon for a while before it fully boots back up.

If you see nothing on the screen after 1 hour, then check to make sure the AC adapter and charging cable you’re using aren’t bad by testing them on a known good device.

If they’re not bad, then keep moving on down the list…

Connect to iTunes and try a system restore

If all else fails, you can always try connecting the device to a computer with iTunes installed on it and see if iTunes recognizes the device. If it does, you can attempt a system restore. If the problem is severe enough, the device may not be recognized by iTunes at all.

Try putting the device into Recovery Mode by performing a hard restart, and then continue holding the buttons even when you see the Apple logo so that you’re brought to the Recovery Mode screen.

iTunes may then show a pop-up like the one below, which tells you that the software on the iPhone needs to be updated and restored:

After clicking on the blue Update button, your computer will start to download the latest firmware for your device. If it takes more than 15 minutes, Apple notes you’ll have to put your device into Recovery Mode all over again.

Allow the restore to take place, then try rebooting the device again.

Note: This method works great as a fix if your device attempts to boot up, but seems to fail mid-boot up for no reason.

I’ve tried everything. Nothing worked…

If after all that ruckus your device still won’t power on, then we’re really sorry to tell you that it’s likely a hardware failure.

An iTunes restore more than likely would have remedied any kind of software corruption or bug in the system, a hard restart would have probably solved a software glitch, and a simple charge of the battery would have resolved a lack of juice. Anything else may be related to a failed storage unit, failed display, or something else going wrong.

If the problem is related to a display, you’ll likely see a black screen, but still hear notifications and vibrations coming from the device when you receive notifications. This can be related to a broken display flex cable or damaged display internals. The display’s digitizer is at fault if you can see what’s on the display, but are unable to make the display recognize any of your touch input. Both scenarios will require a replacement display.

If you have a non-functioning Home button or power button, then this will hinder your ability to perform a hard restart, and will also require replacement parts. Another possible scenario is your syncing port, whether it’s Lightning or 30-pin, may be damaged and is unable to accept power or sync with iTunes. Like a few other scenarios discussed before, this will require replacement parts (or a whole new device). If it’s your device’s storage drive having a bad soldering connection, or something else along those lines, you can also expect a replacement device.

If you couldn’t get your device up and running with any of the steps above, then we’d recommend getting in touch with AppleCare or visiting your local Apple Retail Store.

It’s never fun when your expensive iOS devices stop working as expected, but hopefully after following the steps in this tutorial, you’re able to get your device up and running again. The worst case scenario is you’ll need to contact Apple for support, but the good news is Apple has great technical support and is usually more than happy to put a smile on your face.

Also read: What to do if you’ve forgotten your iPhone’s passcode

If you found this tutorial useful, let us know in the comments below!