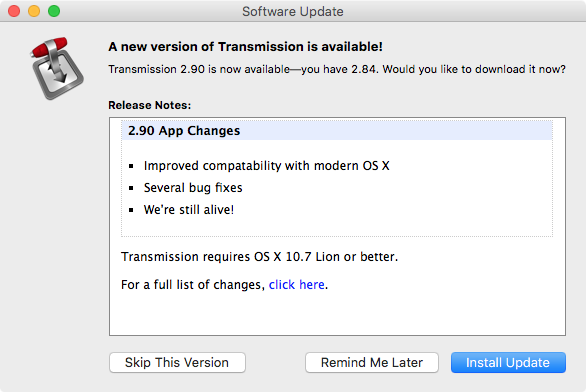 The popular open-source, cross-platform BitTorrent client, Transmission, today received its first major update in more than a year and a half. As first noted by Softpedia, the surprise update makes the free of charge app fully compatible with the user interface on Macs running OS X 10.9 Mavericks and later.

Transmission can now trim potential URIs from clipboard and supports downloading from HTTP servers on OS X El Capitan. Transmission’s daemon, web client, Qt client and GTK+ client have also received various fixes. All told, there are over 50 changes in this release of Transmission.

Across platforms, Transmission now does a better job at torrent renaming with a common prefix. Additionally, the refreshed application now supports a bunch of cryptographic backends such as PolarSSL, CyaSSL and WolfSSL.

Transmission’s Qt client has gained improvements, too, among them better handling of magnet links and a new contextual menu on the Files tab of the Torrent Properties dialog.

As of this version, Macs with OS X 10.6 Snow Leopard or earlier are no longer supported. Be that as it may, I am particularly glad that Transmission to this date continues to be free of in-app advertising, unlike its rival uTorrent which is full of adware.

Here’s everything that has been improved and fixed in Transmission 2.9.

Again, this is the first major update to this free of charge, cross-platform BitTorrent client in nearly two years (the previous update is dated May 18, 2014).

What’s your favorite BiTorrent client for the Mac?