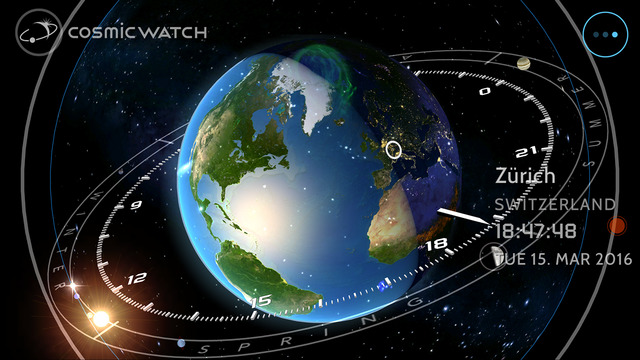 It’s funny how the Apple Watch’s debut prompted Apple bloggers to become self-proclaimed horology experts. I never pretended to be one, but as an amateur astronomer think Apple should be credited for going to great lengths in paying homage to the traditional environment in which horology was developed by putting strong emphasis on the device’s advanced timekeeping features and features like the cool Astronomy and Solar watch faces.

You don’t need to own an Apple Watch if you’re eager to discover the fascinating relation between time and the cosmos, all you need is a superb iPhone app by Swiss developer (how appropriate!) Celestial Dynamics, called Cosmic Watch.

This gorgeously designed application with beautiful 3D graphics is essentially an interactive learning tool that will teach you about the concepts behind the celestial sphere and educate you on the principles guiding the apparent movement of the sky.

Since thousands of years, humans have been able to measure time just by observing the sky and tracking movement of celestial objects. Cosmic Watch is basically an advanced astronomical time device, recreated for the digital age on the screen of your iOS device, with a real-time point of view and lush 3D graphics. 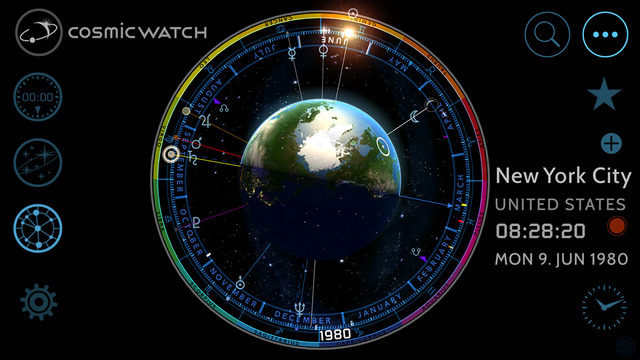 Upon launching Cosmic Watch, the app’ll determine your location to calculate your local time with daylight saving adjustments. You can also determine the local time anywhere on Earth by dragging your finger across the 3D globe.

Not only does the app determine the exact time of sunrise or sunset with the horizon, but also accurately predicts solar eclipses and compensates for Earth’s tilt and variable speed as it orbits around the sun, all of which is nicely visualized. 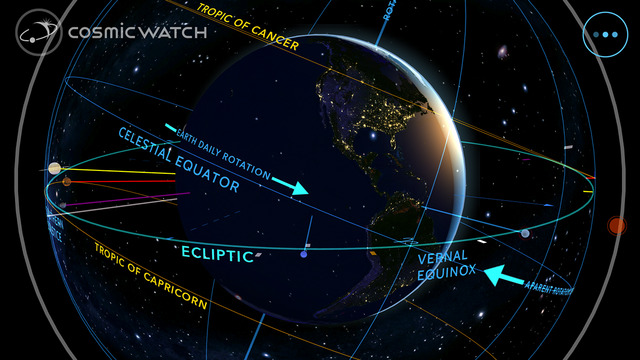 As mentioned, the app simulates the celestial sphere, which is an imaginary sphere of gigantic radius with the Earth located at its center. It lets you see the projection of the position of the stars, the sun, the moon and the planets, as seen from Earth.

Going beyond Earth and time travel

Cosmic Watch displays time in relation to the sun and the cycles of the planet in the Solar System. Its model is capable of clearly illustrating the relative positions and motions of the planets and moons according to the heliocentric model, so Cosmic Watch basically becomes your digital orrery. 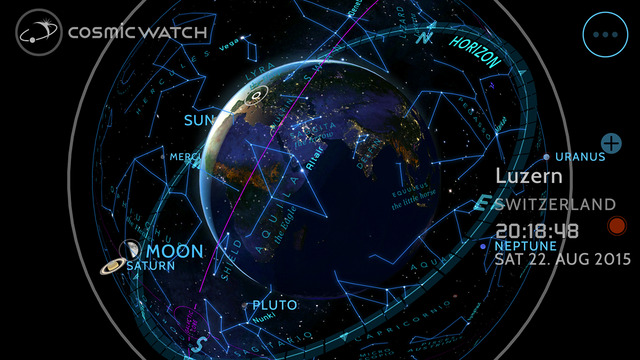 It is these astronomical models that permit the software to predict where the celestial objects will be, or were, at any given point in time, meaning you can explore any planetary positions in the past, present and future.

By aligning the Cosmic Watch with the cardinal points, not only can you identify planets in the sky and see your real-time position in the cosmos but determine the best time for, say, gazing at the Milky Way. Establishing where constellations such as the Big Bear are at any given place or point in time, and seeing how they change over the years, is a piece of cake with Cosmic Watch.

Serious star gazers will be pleased that they can achieve unparalleled level of precision in Cosmic Watch by adjusting their “telescope” with the equatorial coordinates.

And with an interactive, visually rich astral chart, finding out your ascendant and planets in retrograde is easy and fun. In a way, Cosmic Watch is a digital clock, a calendar, a solar system simulator and a celestial sphere—all wrapped into one beautiful package.

Cosmic Watch doesn’t really solve any real-world problem, but that doesn’t change the fact that this app is great for people whose needs go beyond telling time. As someone who has been a hobby astronomer since his childhood years, I should point out that I have never developed interest in horology.

But something funny has happened after buying my Apple Watch Sport: I became interested in, and wanted to learn more about the ancient disciplines of astrology and time keeping. 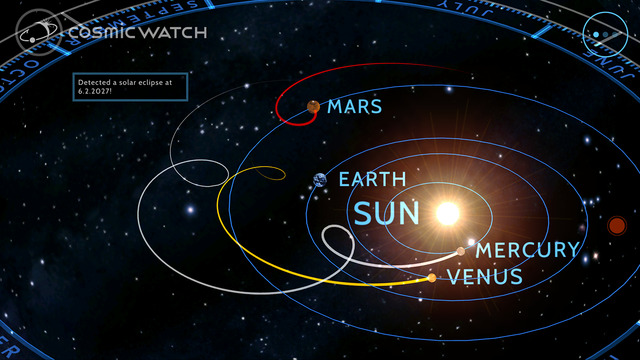 I wish the Apple Watch has more faces like Astronomy and Solar, but it doesn’t.

Still, that may be precisely why Cosmic Watch has managed to pique my interest and capture my imagination. With this little gem of an app, I’ve thrown myself completely into the art of measuring time (to anyone fascinated by this topic, I couldn’t recommend more this Wikipedia page as a great starting point).

Developers bill the Cosmic Watch as “an advanced time device and a symbol for our times” which elevates the observer’s consciousness “about our harmonious existence in the cosmos.”

All I can tell you that it’s an exquisitely designed app which does a terrific job of helping average users to understand time from an astronomical point of view, whether they’re sky gazers or not.

And the fact that it’s Swiss-made is an appropriate way to wrap up this review, I guess.

Cosmic Watch is English-only and requires an iPhone, iPod touch or iPad with iOS 6.0 or later. The universal app is available in the App Store for $3.99.