Since its inception in 2008, Android has generated revenue of $31 billion and $22 billion in profit, a lawyer for Oracle said in a federal court, marking the first time Android’s financial performance was publicly revealed.

As a quick refresher, Oracle, the database maker, is suing Google’s parent Alphabet over using its Java software without paying for it to develop Android. The figure is based on information Oracle derived from Google’s confidential internal financial documents.

Oracle contended that Google was in a “space race” with Apple and “neck-in-neck” with Apple’s iOS platform, alleging that Google used its Java software without paying a feee simply because it needed to get Android off the ground and start reaping profits from it.

The attorney cited testimony from a Google engineer that the alternatives to Oracle’s software “all suck.”

As noted by Quartz, Apple in the September 2015 quarter alone has generated more iPhone revenue than Android has in its lifetime. The comparison, however, isn’t fair because Apple makes its riches by selling expensive hardware while Google monetizes Android with advertising and app sales.

The $31 billion revenue and $22 billion profit for Android includes both mobile ads served on the platform and revenue from app sales in the Play store. Apple’s during its September 2015 quarter raked in $32.2 billion in iPhone sales, excluding sales from its app store, which is lumped into the “services” bucket in its earnings.

Gartner estimates that Android accounted for 84.7 percent of the mobile operating system market share in the third quarter of 2015 compared with just 13.1 percent for Apple’s iOS.

However, that 13.1 percent are affluent customers who buy high-end devices and spend money on apps and media. 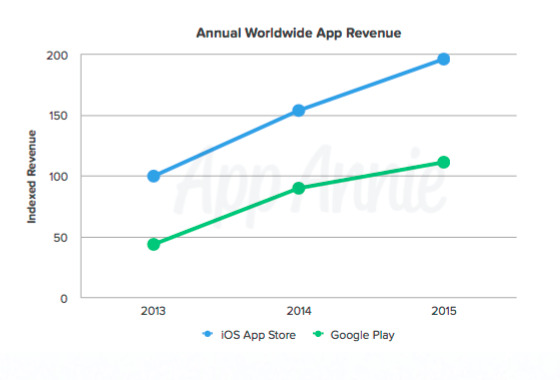 According to a report by mobile marketer App Annie, despite Google’s Play store servicing twice as many app downloads as the App Store in 2015, the iOS platform now earns 75 percent more in app revenue than Android.

In 2014, the App Store recorded 70 percent greater revenues than Google Play so Apple’s lead has actually increased. It was also reported that Google paid Apple a hefty fee of $1 billion in 2014 to keep its search bar on the iPhone.