Just before the new year, I decided to take on Sprint’s promotional event of cutting an AT&T, Verizon, or T-Mobile bill in half. Being with AT&T for more than 6 years, and having always wanted to try another carrier for the heck of it, I was lured in by being able to save a few bucks on my monthly bill.

Their offer to pay my contract breaching fees up to $650 from AT&T just about sealed the deal as well.

Knowing that Sprint didn’t have the best service in the world, I was wary, but since I really only use my iPhone for social networking, phone calls, and iMessaging, and wouldn’t be doing things like streaming HD videos on the go, I was going to take the plunge anyway and see whether or not Sprint would be a good fit for my needs.

If you too were thinking about Sprint for your next carrier, then read on, because what I’m about to share with you could make or break your decision and save you a ton of time of cancelling agreements and wasting time and money.

Where was that better network Sprint was advertising?

After Sprint announced that they were launching LTE Plus in a limited amount of markets and I found that my area was one of the areas where I could pick up on the new LTE Plus signal, I was determined to give it a try. Sprint advertises that their LTE Plus network is faster than Verizon or AT&T “based on recent data from Neilsen,” but is that really the case?

Since I always knew Sprint’s network to be somewhat of a snail, I was weary of these claims from the beginning. I have friends who use Sprint and my AT&T service has always blown their performance out of the water, but never had I seen real-world performance from Sprint’s LTE Plus network; after all, it was brand new.

When I got my new iPhone, it was an iPhone 6s Plus; one model newer than my AT&T iPhone 6 Plus. So I knew I was getting the best of the best with the latest cellular radios and supported bands built in. I knew there was no potential for bottle-necking, so I was ready to test out the new network to its full potential. Two other lines were also present on my agreement – two iPhone 6s handsets.

Over the course of a week of testing, I had found the LTE Plus signal was very difficult to grab, and that for the most part, I was only getting Sprint’s basic LTE network. Perhaps the worst part about the whole thing was that Sprint’s LTE download speeds matched what I can achieve on AT&T’s EDGE (2G) network on a lucky day. Sometimes, Sprint’s LTE download speeds would match what I could achieve on AT&T’s 3G network, but it seemed less often that this would happen. 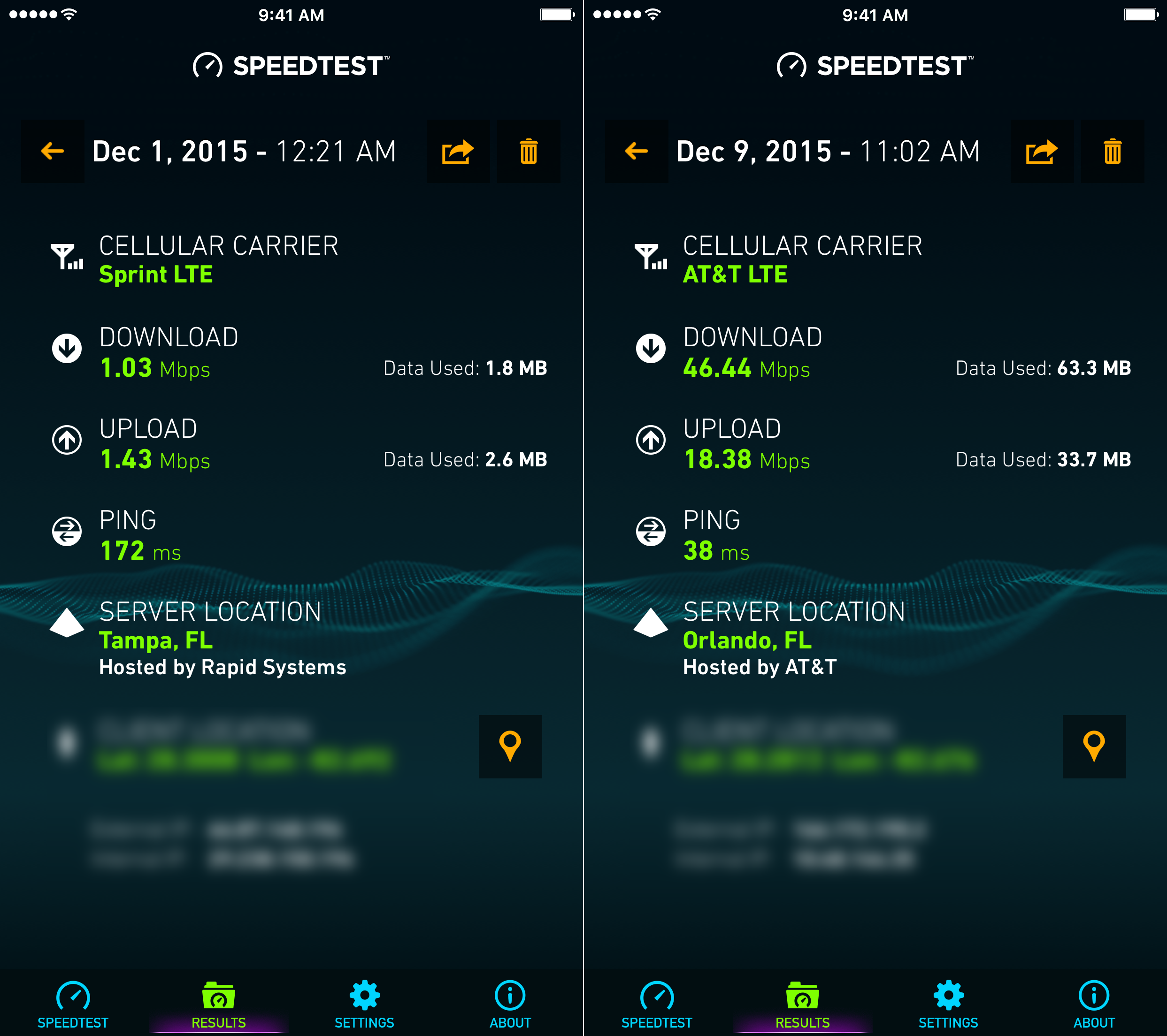 The only time I ever connected to Sprint’s LTE Plus network was in a single place where I had least expected it – in the middle of nowhere on the same old highway each time – and even those speeds were slower, although marginally, than my average on AT&T, despite Sprint’s claims of being faster: 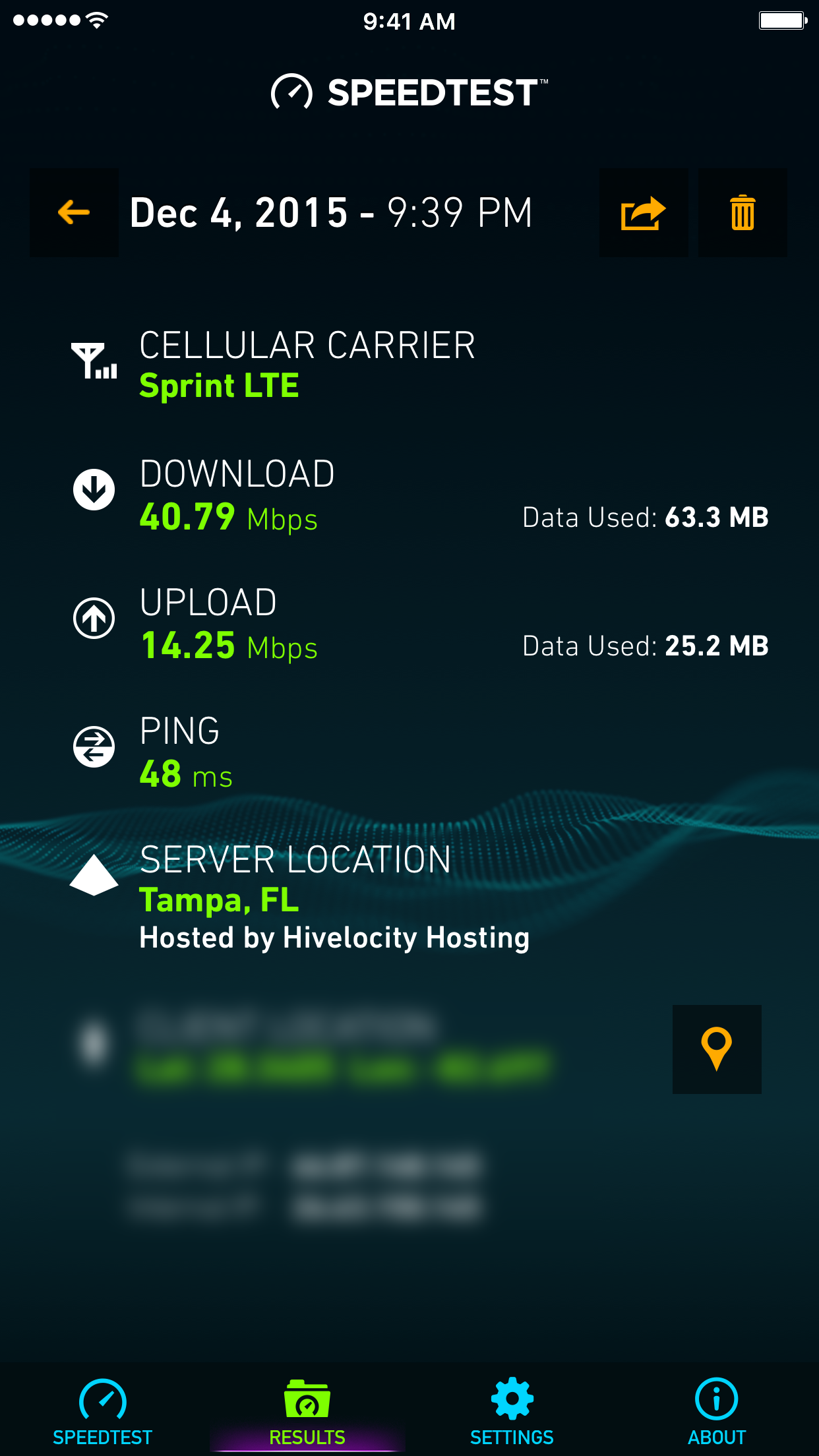 Other days, Sprint’s LTE Plus network would linger between the 18-28Mbps range, and again, I only ever got an LTE Plus signal in the same spot – never anywhere else in my area.

With these results, I have to say I was rather dissatisfied with my service with Sprint, but even with these slower data speeds, I still held on. It wouldn’t be until additional matters continued to escalate my dislike for the Sprint network.

On any carrier, and I mean Sprint, AT&T, Verizon, T-Mobile, or even one of the little guys, you should expect to be able to load a web page, or load your Facebook news feed when you have a signal. I had experienced non-stop drama with the Sprint network in this respect, where even when I was connected to the network, and had two or three bars of signal, I would get an error while trying to load my Facebook news feed and it would say to check my internet connection.

Sometimes while using the Speedtest.net app, it would hang in limbo while trying to find my closest server, and I would have to wait up to 5 minutes for it to find one, only to time out and have the app tell me there was something wrong with my internet connection. Keep in mind, this was on Sprint’s LTE network with anywhere from 1-3 bars.

It would be a complete relief when I would get home and connect to my Verizon FiOS Wi-Fi network. For once, I could sit down and actually digest internet content. It made me miss the speed and reliability of my AT&T network, and slowly, the nostalgia would set in, but I still hung on to Sprint because I wasn’t ready to give up just yet.

The next major problem that I noticed was how poor the call quality seemed. The voices were clear, but they sounded so flat in comparison to what I was used to on the AT&T network. Without a doubt, AT&T’s voice over LTE (VoLTE) had been programmed into my ears, and hearing anything different was like nails on a chalkboard. AT&T’s sound quality is richer and had many more dimensions of sound than Sprint’s flat call quality.

Since I often talk on the phone when I’m driving, and I drive a Jeep with really loud tires, loud and clear phone calls are a must for me, and it was a complete disappointment when it was difficult to hear the other person on the other end of the phone call throughout the entire ride.

I kept telling myself that I was saving a few dollars every month and that the sacrifice in call quality, slower data, and not-so-reliable service was a side effect to be expected from the cheaper price tag, and so I still continued to hold on.

But it wasn’t until the reason below that I couldn’t do it anymore.

Customer service did anything but serve

Indeed you must be thinking that I was crazy to stick with Sprint for so long after dealing with the problems above, and I would agree with you! But I just needed to save a few dollars.

Somewhere near the end of my week of trying the new phones on Sprint’s network, a hairline fracture appeared on one of the iPhone 6s units that was on my agreement. The phone had not been dropped, and had not even been taken off of a table the entire week. It turns out that it was a manufacturer defect, and a hairline stress crack had developed in the display that went from the right side of the iPhone to the left side.

I figured, “okay, no big deal, I’ll just take this to the Sprint store and explain the situation.”

As if – Sprint literally looked at the phone, called the store manager up to explain the situation, and then placed it back in the box and slid the box back in my direction over the counter. The associate told me, “there’s nothing we can do for you.”

Fortunately, Sprint offers a 14-day grace period where you can completely return everything and cancel your agreement before you have to pay any fees to discontinue service. The only trick would be getting the store to return the broken phone, which they clearly weren’t going to do as per store policy.

My next step was taking an hour drive to the nearest Apple Store to see what they could do for me. They confirmed that the display was indeed a defective display. Since the display repair machine was apparently broken that day, they opted to give me a brand new iPhone 6s handset to replace the busted one at no charge. This also meant having a new serial number from the original, so Apple gave me a work order showing that they exchanged the handsets and it listed the two serial numbers.

With the merchandise in hand, and the paperwork supporting the replacement, it was time for round two of trying to initiate a return at the Sprint store. Even with the iPhone having been repaired, Sprint was still hesitant, but they finally agreed to return the merchandise and cancel service, which is when I went right back to AT&T and activated my old iPhone 6 Plus again.

Needless to say, it was an awful experience for me from start to finish; using the phone on a far inferior network, and even trying to get a problem resolved, were met with issues that prevented me from being able to go about my everyday routine and get things done.

Sprint’s ‘cut your bill in half’ promotion sounds good at face value, but when you lock yourself into a two-year agreement, you may be signing away your good service for poorer service at only a slightly cheaper price. This is because your monthly bill won’t actually be 50% of what you were already paying; instead, only the cost of the data itself is 50% of what you were paying, so I was really only saving about $40 per month off of my original $180/month AT&T bill for 20GB of shared data.

Have you used Sprint before, or are you currently using Sprint? If so, then we’re very interested in seeing your data speed results too! You can download the Speedtest.net app for free from the App Store.