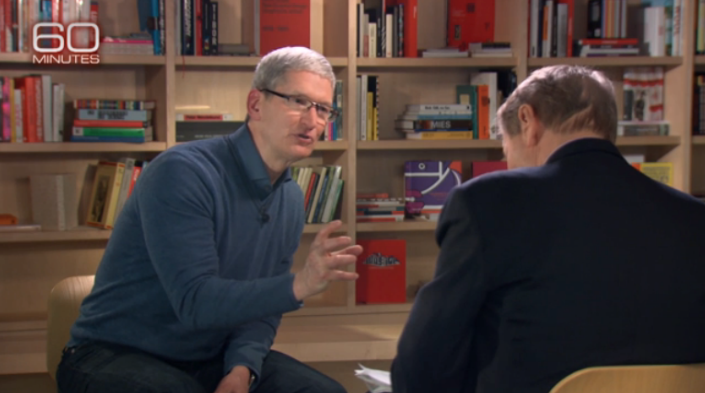 60 Minutes on Friday shared a one minute clip from its upcoming interview with Apple CEO Tim Cook. In the preview, Charlie Rose asks for Cook’s thoughts regarding Apple’s congressional tax hearing, which found the company to be engaged in a “sophisticated scheme” to avoid taxes on its $74 billion held overseas.

“That is total political crap,” Cook says. “There is no truth behind it. Apple pays every tax dollar we owe.” He explains that Apple does a lot of business overseas, which is why a lot of its revenues are overseas, and although the company would like to bring that cash back to the United States, it would cost 40% to do so.

We had trouble embedding the video, which you can find here, but here’s the meaty part of the exchange:

Rose: How do you feel when you go before congress and they say you’re a tax avoider?

Cook: What I told them, and what I’ll tell you and the folks watching tonight is we pay more taxes in this country than anyone.

Rose: Well they know that, and you should because of how much money you make. But you also have more money overseas than anyone.

Cook: We do, because as I said before, two-thirds of our business is over there.

Rose: But why don’t you bring that home, is the question.

Cook: I’d love to bring it home. But it would cost me 40% to bring it home, and I don’t think that’s a reasonable thing to do. This is a tax code that was made for the industrial age, not the digital age. It’s backwards. It’s awful for America. It should have been fixed many years ago. It’s past time to get it done.

Of course, you can catch the full interview on 60 Minutes on CBS this Sunday night. As we reported last night, Mr. Rose will also be talking with Apple design chief Jony Ive, from inside his secret design lab, and retail head Angela Ahrendts, who has given Rose a tour of a concept design for future Apple retail stores.