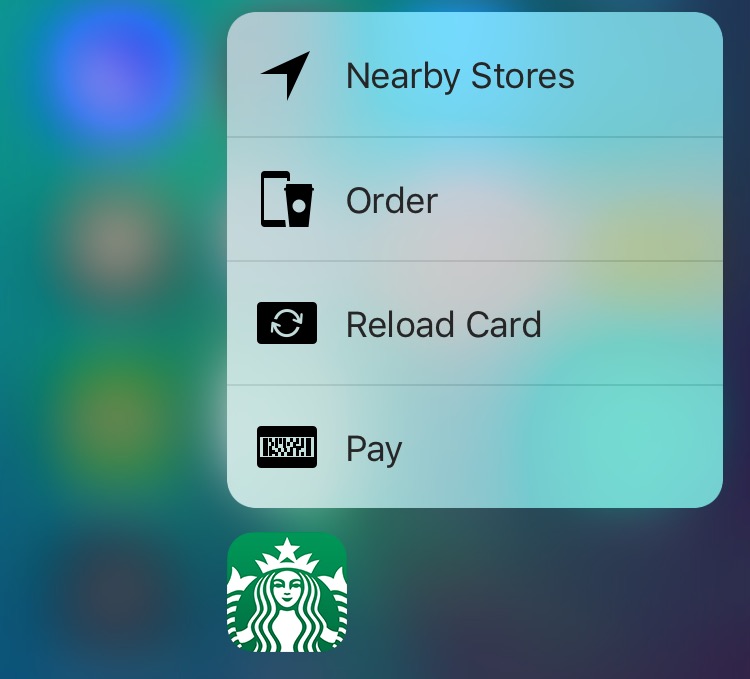 Several major apps have added 3D Touch support earlier today. Wunderlist and LinkedIn, for example, have brought out support for Home screen shortcuts and Peek and Pop gestures within the app with 3D Touch. And now, Starbucks has issued a similarly-themed update to its iPhone application in the App Store.

With Starbucks 3.3.4 for iOS, you can press the app’s Home screen icon lightly on your iPhone 6s or iPhone 6s Plus to bring up a 3D Touch menu with several quick actions: Nearby Stores, Order, Reload Card and Pay.

Starbucks does not, however, support Peek and Pop 3D Touch gestures within the app. This release of the app also fixes some bugs with the Mobile Order & Pay feature to help customize your order exactly how you want it.

And, Starbucks has confirmed that customers in the Seattle area will be soon able to have their mobile order delivered in under an hour.

On a related note, Starbucks is releasing a brand new festive beverage this season: The Holiday Spice Flat White.

Starbucks requires an iPhone, iPod touch or iPad with iOS 8.0 or later and offers a native watchOS 2 app for your Apple Watch for ordering and paying for your lattes directly on your wrist.

Grab Starbucks free of charge in the App Store.