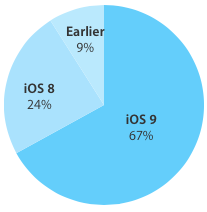 The data comes via Apple’s dashboard for developers and is derived from App Store access logs on Tuesday, November 16, 2015. iOS 8 continues to comprise just shy of one-quarter of active iOS devices in use, while earlier iOS editions collectively account for nine percent of iOS devices being actively used.

The official numbers for iOS 8 are down one percentage point compared to the last check two weeks ago while stats for the ‘Earlier’ have remained unchanged from the previous adoption rate update.

In other words, the one-point gain for iOS 9 adoption achieved over the past two weeks has come at the expense of iOS 8 as users continue to upgrade to Apple’s latest and greatest mobile operating system.

Also, some (much?) of the growth exhibited by iOS 9 should be attributed to new iOS device purchases, which come with iOS 9 preinstalled.