Apple’s iOS 9 mobile operating system is now installed on two out of each three iPhone, iPod touch and iPad devices in the wild just a little over a month and a half following its September 16, 2015 release.

According to the official stats available through the company’s App Store dashboard for developers, iOS 9 is now powering 66 percent of Apple’s mobile devices in active use versus the adoption rate of 61 percent recorded just two weeks ago.

iOS 8 continues to power one-quarter of active devices, accounting for 25 percent of active devices the wild while earlier versions of iOS recorded a nine percent share. That’s a notable five percentage point drop for iOS 8 which just two weeks ago was detected on thirty percent of iPhones, iPads and iPod touches. 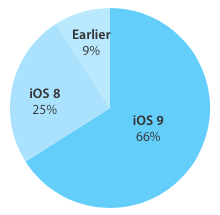 Apple’s data was derived from logs capturing iOS devices that had accessed the App Store on November 2, 2015. The stats indicate that iOS 9 continues to grow as existing users upgrade from iOS 8 to the new software or upgrade to new devices that ship with iOS 9 preinstalled.

By comparison, about three-quarters of Android smartphones and tablets that had accessed the Play store during a seven-day period ending on October 5, 2015 were running a version older than last year’s Android 5.0 Lollipop.