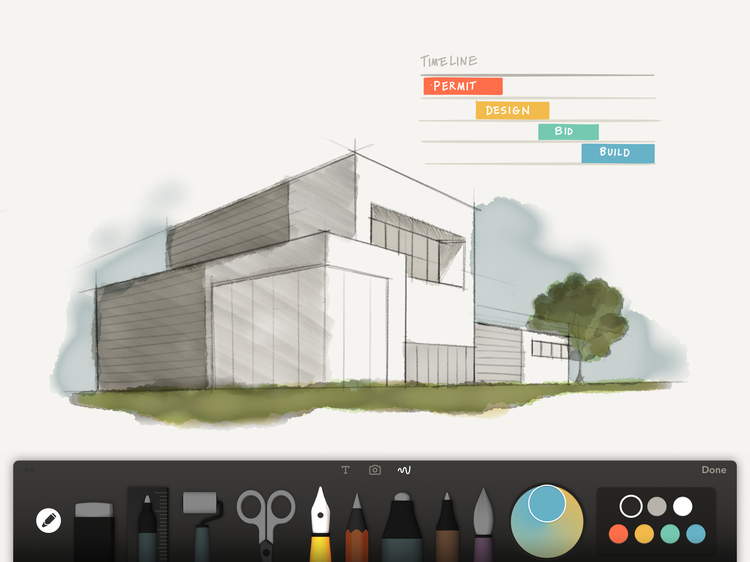 Following Apple’s confirmation this morning that it will begin accepting online orders for the iPad Pro this coming Wednesday, developer FiftyThree has now updated its Paper drawing app with support for Apple’s upcoming device and full compatibility with the Apple Pencil.

In addition, today’s Paper update brings out pressure-sensitive inks on the iPhone 6s and iPhone 6s Plus smartphones via 3D Touch and the ability to reorder Spaces from the Space Settings dialog.

“Paper on the iPad Pro unlocks a new era for productivity by giving big ideas room to grow,” developers said.

Georg Petschnigg, CEO and co-founder of FiftyThree, was quoted in Apple’s press release this morning, saying:

Creative thinkers worldwide use Paper as part of their workflow, designing everything from flow charts, to storyboards, to wireframes, to architectural sketches. iPad Pro is the ultimate platform for Paper, with a powerful 12.9-inch Retina display and A9X chip that deliver performance rivaling most portable PCs.

With its massive screen, the iPad Pro certainly gives Paper users a much bigger canvas for their notes, photos, sketches or diagrams.

And with pressure sensitive inks, owners of the iPhone 6s or iPhone 6s Plus can now apply pressure while drawing in Paper with their finger, or while using any of the supported styli.

“Whether you’re using your finger or a stylus, our Expressive Ink Engine now has full pressure sensitivity built-in for those using 3D-Touch enabled devices like the iPhone 6s and 6s Plus,” boasted FiftyThree.

Lastly, as mentioned, this edition of Paper lets you reorder Spaces to suit your liking.

Paper requires an iPhone, iPod touch and iPad with iOS 8.0 or later.