It is no secret that Facebook’s mobile app has always been a battery hog, even with Background App Refresh turned off. Instead of fixing the issue, Facebook appears to employ tricks to keep the app active in the background, further accentuating the battery drainage problem.

According to TechCrunch, Mark Zuckerberg & Co. are aware of the problem and its programmers are working around the clock to put out a fix “soon”.

“We have heard reports of some people experiencing battery issues with our iOS app. We’re looking into this and hope to have a fix in place soon,” said the spokesperson.

The app’s extraneous background usage—again, even with Background App Refresh turned off—is keeping it alive two times longer than its actual usage, according to Circa co-founder Matt Galligan who blogged about the issue in a damning post on Medium.

“Make no mistake: this is user-hostile,” he wrote.

He is accusing the company of “actively creating channels to continue refreshing their app in the background when the user has explicitly stated that they do not want it to.”

MacStories editor Federico Viticci suspects the app is “hijacking audio sessions on iOS by keeping silent audio in the background whenever a video plays in the app,” a nasty trick designed to keep the app active in the background and drain battery. 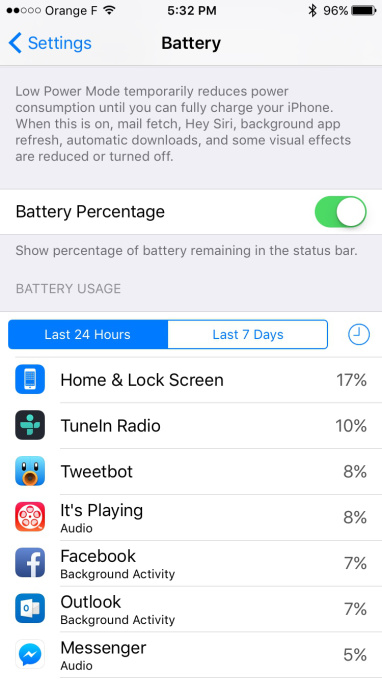 “Because, by default, videos on Facebook auto-play on both Wi-Fi and Cellular and few people ever bother to turn it off, that means there’s a high chance the Facebook app will always find a way to play a video, keep audio in the background, and consume energy to perform background tasks,” he wrote.

If you have been plagued with the excessive battery drainage caused by Facebook’s main mobile app, you should install their Paper app which doesn’t seem to be active in the background when Background App Refresh is turned off.

Paper is also more elegant and user-friendly than the main iOS app. Unfortunately, Paper is US-only so you’ll need a US App Store account in order to download it.

Or, you could just delete the mobile Facebook app entirely from your device and use the mobile interface until the company comes to its senses and sorts this issue out.

Both Paper and Facebook are free downloads from the App Store.