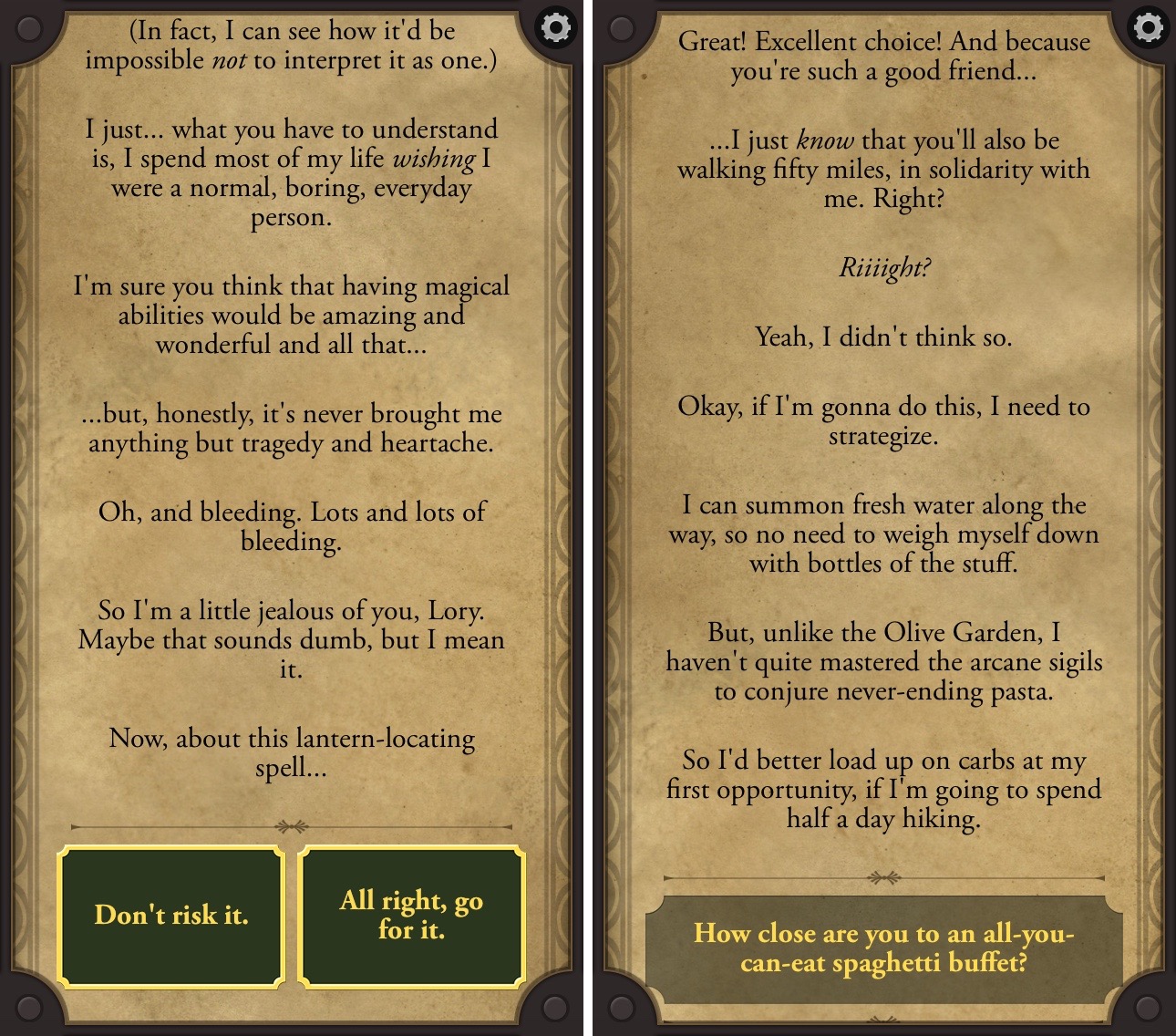 When Apple Watch first launched, 3 Minute Games made a huge impression with its choose-your-own-adventure game, Lifeline, designed for the wrist worn device. It is a simple text-based game where players help a character on the other end survive. It was a huge hit with Apple Watch owners.

Lifeline 2 is out now and it is definitely a proper follow up to the first game. It has all the same charm as its predecessor, but has an entirely new story and includes some new features to make players happy. We’ve got a full game review of Lifeline 2 for your reading enjoyment.

You receive a transmission from a young woman in the form of a communication spell. She was trying to reach her brother, who was lost years ago. She finally got through to someone, but it wasn’t whom she was hoping for. She got you.

You help Arika along a dangerous adventure to rescue her brother and hopefully save her magical town. The choices you make when advising Arika will directly affect whether she lives, or dies.

Similar to the first Lifeline installment, this game is 100 percent text based. The story scrolls along on screen and, whenever there are choices to be made, you can tap one response or another.

The biggest difference between the two titles, however, is the aesthetic. While Lifeline was based in science fiction, Lifeline 2 is steeped in magical fantasy lore. Therefore, the theme has more of an ancient scroll look, instead of the cold, black space theme of the first story.

There is also an atmospheric soundtrack playing in the background. It is subtle and unassuming, but adds to the ambiance of the story. Fans of text-based adventure games will know that it suits the environment perfectly. 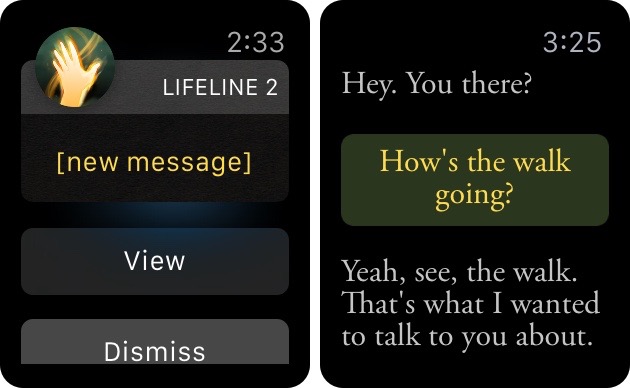 The game plays out in real time. The story starts when you first open the app. You meet Arika, learn her plight, and tell her your name. In this tale, Arika (as well as some other in-game characters) will call you by name, which is a nice touch.

Then, the adventure begins. Arika will ask you for advice about traveling abroad, casting spells, and communicating with strangers. Some of the advice you give will have a direct affect on the young spell caster’s survival. Good advice will help her find her brother, while poor advice might get her killed.

Just like Lifeline, this story plays out in real time. That means, when Arika is busy, she won’t be interrupted. It also means that, when she needs you, she will let you know. That’s where playing on Apple Watch becomes so impressive.

When enough time has passed (maybe Arika has woken from a nap, or finished casting a spell), you’ll get a notification on your Apple Watch that she is trying to contact you again.

You aren’t required to respond right away. Nothing happens if you don’t open the app. I went days without responding once and everything was as I left it when I finally picked up the game again.

You can play the entire game on Apple Watch, or on your iPhone, or switch between the two as you like.

Lifeline 2 is much longer and more story rich than its predecessor. Arika has a lot more to say and there are many different branches to take. Even mundane conversations are written differently, depending on how you respond.

This story is so rich that I still haven’t even gotten very far with it. I accidentally killed Arika once, fairly early on. Luckily, you can rewind to a previous decision once you’ve completed its story branch. So, if you tell Arika not to cast a spell, after you’ve completed that section of the story, you can go back in time, in a sense, and change your answer. 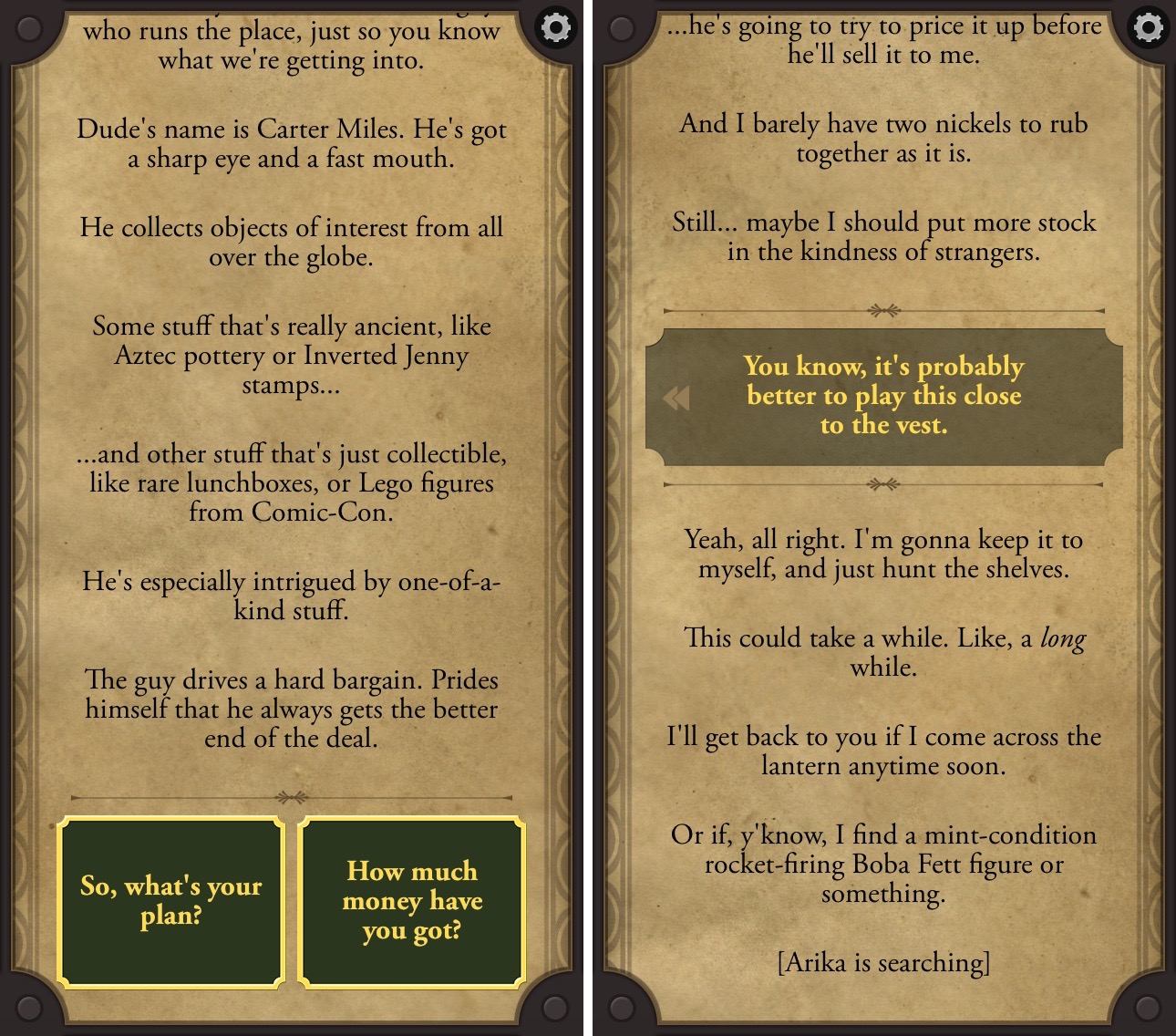 The most unique aspect of the Lifeline adventures is how you don’t get to force the story along. You must wait until the character on the other end is ready to talk to you. This makes you feel like you are truly communicating with someone on the other side. As we speak, I’m waiting for Arika to get back to me, and I’m excited to find out what happens next.

As compared to the original Lifeline game, this one is definitely more robust, with a deeper story and more choices. With Taylor’s story, he didn’t have long to live and there was a sense of urgency. Arika’s story takes a slower beat and lets you get to know her better.

Lifeline 2 costs $2.99 and it is worth every penny. For less than a cappuccino, you have a game that you can replay as many times as you like, with hundreds of choice options. The replay value is tiptop, since every decision has an effect on the story, and every choice can be remade.

If you have any interest in text-based adventure games at all, you should get this game. It is unique and fun and worth your time. If you own an Apple Watch, the experience will be even better. Download it in the App Store today.

Check out 3 Minute Games’ previous Lifeline game for a sci-fi version of text based adventuring.