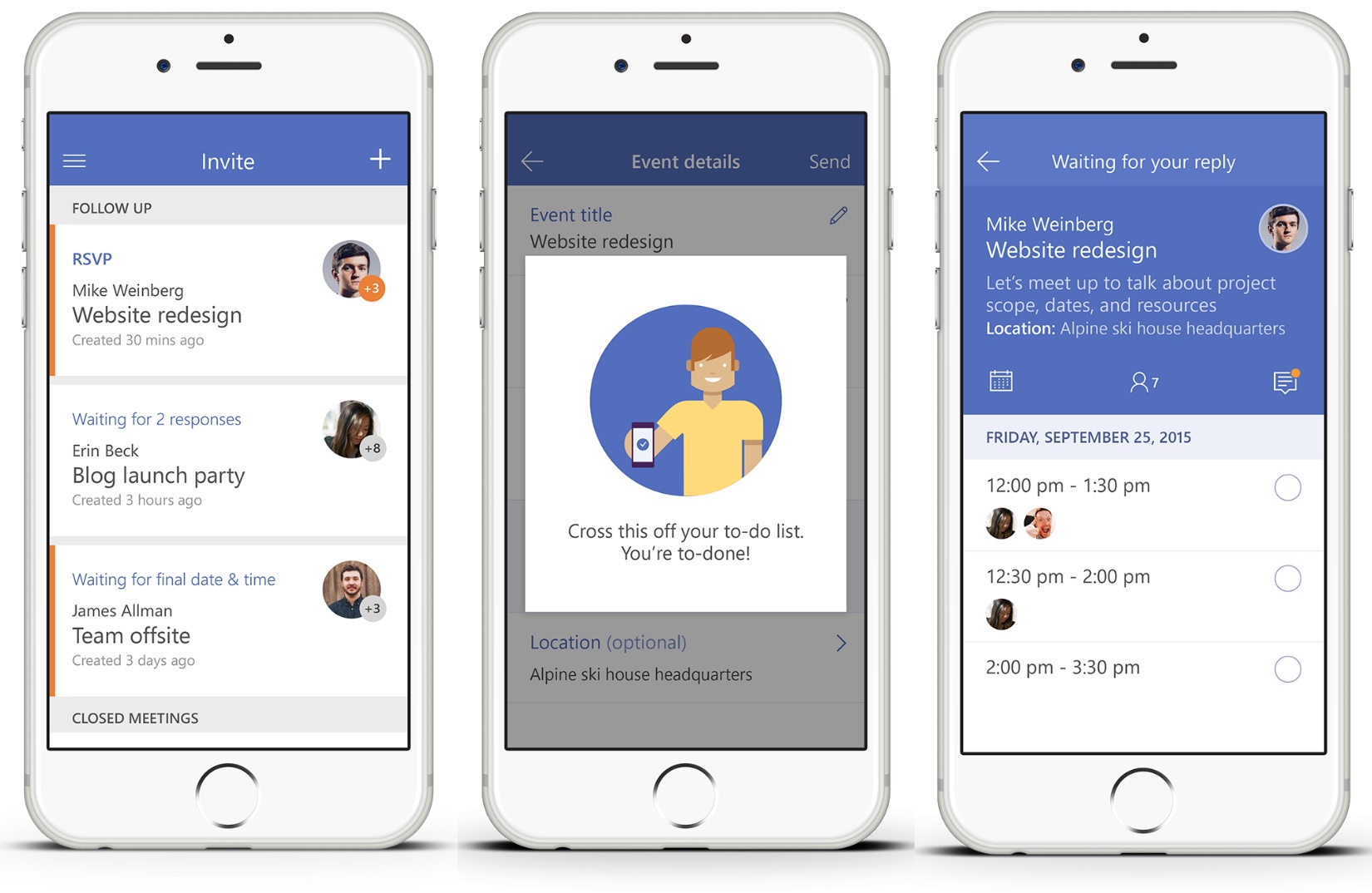 Not to be outdone by Google which just released a note-taking iPhone and iPad app called Keep, software giant Microsoft today rolled out a brand new productivity app of its own, Invite for iPhone.

A Microsoft Garage project, Invite was designed to help groups “agree on a time to meet, even when they can’t see each other’s schedules.”

You simply suggest times that work for you, and then invite attendees. After attendees select all the times they can attend, and once everyone has responded through Invite or via the web interface, you simply pick the time that works best for everyone and your group meeting is a go.

All you need to organize group meetings is an email address. As an organizer, the app lets you define multiple times that work for you and attendees can pick from those suggestions, or check out what options work best for other attendees.

There’s no emailing back and forth as the app takes care of the minutiae of group scheduling . Once you define an event, your attendees will receive a push notification, or an email message if they don’t have Invite installed.

“You choose a final date and time whenever you’re ready,” Microsoft explains. “Just pick the time that most people can make the meeting and tap Send Calendar Invites to get it on their calendars.”

Attendees are also free to pick times that work best for them, even if that means moving one of their own meetings. Choosing event times can be done within the app itself or in the web interface, through any web browser.

When the meeting is decided, just send your invite. Meetings scheduled from Invite will show up in the calendar of the account you have signed in with. Privacy advocates needn’t worry as Invite doesn’t force you to share your calendars with anyone.

The app was designed to work best for Office 365 business and school subscribers, but you can sign up using any email account, including Outlook.com, Gmail and Yahoo Mail.

“With Invite you won’t have to worry about whether attendees are inside or outside your organization, what platform they’re on, or whether they have less important meetings squatting on valuable calendar space,” Microsoft said in a blog post.

Invite is a novel idea that in my view has lots of potential.

It certainly does remove a lot of the friction associated with organizing group meetings on the go and. And allowing everyone to suggest times that work for them is a lot better proposition than relying on what’s advertised in calendar free/busy availability.

Back in the summer, Microsoft released a pair of Garage project along similar lines.

One, called Tossup, is basically an opinion-gathering mobile app that strives to remove the friction around event planning.

The other is called Send and conceived as a hybrid email/IM app for engaging in snappy communications with co-workers using quick IM-style conversations without a subject line or formal email constructs.

Invite is a 17.6-megabyte download, iPhone-only at launch (coming soon to Windows Phone and Android phones) and currently available in the United States and Canada. The app requires iOS 8.1 or later.

Grab Invite for iPhone at no charge in the App Store.