Microsoft has released a brand new iPhone and iPad application in the App Store. Called Tossup, it was designed to make event planning and opinion-gathering a cinch by basically collecting answers from your friends to any questions you pose to them.

You can present people with a quick Yes/No poll, ask them to find and pick a restaurant, to agree on when to meet, invite them to extend the opinion about any topic and more.

“You ask the questions,” says the blurb, and “your friends cast the votes. Where to go. When to meet. Tossup lets everybody know.”

In addition to built-in polling options, you can write your own polls. Complex issues that cannot be resolved via a simple poll can be discussed thoroughly with the group using built-in chat.

The software promises to remove any barriers that cause plans to fall through.

“Our aim is for you to spend more time hanging out with friends rather than coordinating schedules,” a Tossup team member said.

Maybe the best thing about Tossup is its ability to connect your calendar, meaning those plans can turn into reality with just a few taps.

Tossup is a project by Microsoft Garage, their after-hours idea factory. 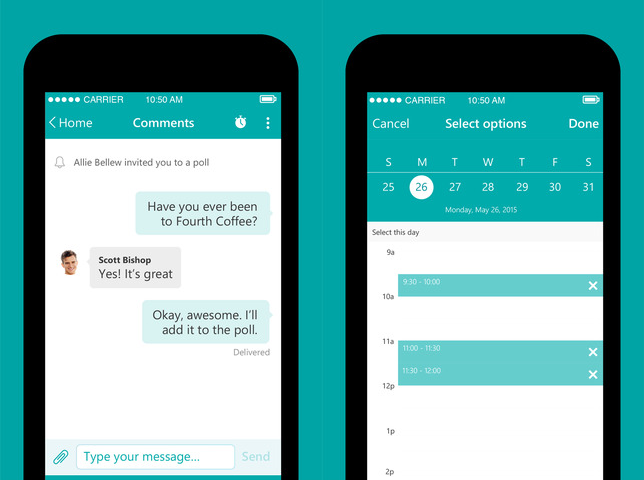 You can check out other Garage projects here.

Although an app like this wants to be used from the wrist, Tossup in its initial release lacks a WatchKit component for your Apple wearable device.

An Android edition is available over in the Google Play Store.

The 15.8-megabyte app requires an iPhone, iPod touch or iPad with iOS 8.0 or later. Tossup is optimized for the iPhone 5/5s/5c and iPhone 6/Plus screen resolutions.

Grab Tossup at no charge in the App Store.