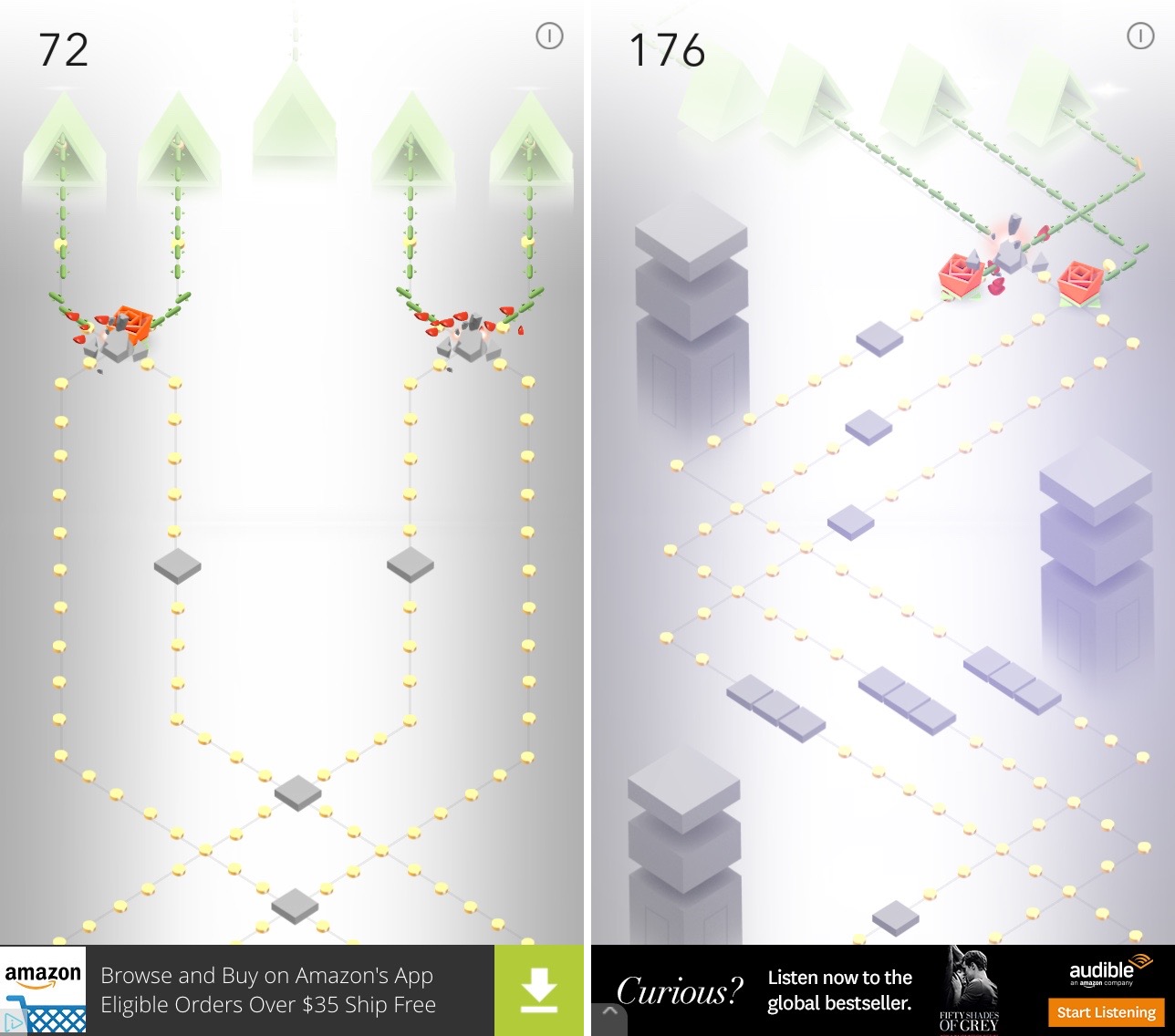 With all the new features in iOS 9, it is quite a frenzy of excitement around here. It can sometimes be hard to remember to appreciate the simple things in life, like the smell of summer rain or the first leaves of fall, or a cool minimalist game.

Sky is a simple tapping game with an appealing minimalist visual aesthetic that relaxes and invigorates at the same time. I know I sound like I’m talking about soap, but if you play the game, you’ll know what I mean. We’ve got a game review of Sky for you today.

A character travels down a rail and your job is to help it avoid obstacles in the pathway by tapping the screen. Along the rail are coins that you collect, which are used to unlock new characters. It’s fairly simple, but surprisingly difficult.

The game takes place in what can best be described as, above the clouds. The background is covered in mist with pillars protruding out from some depth below. Everything is shrouded in gray hues, except the character and the coins it collects.

The character starts off as a simple square, but when you unlock new ones, they can change shape into such things as roses, dragons, and even unicorns. Each new character has a unique trail, but is no different in abilities as the others. 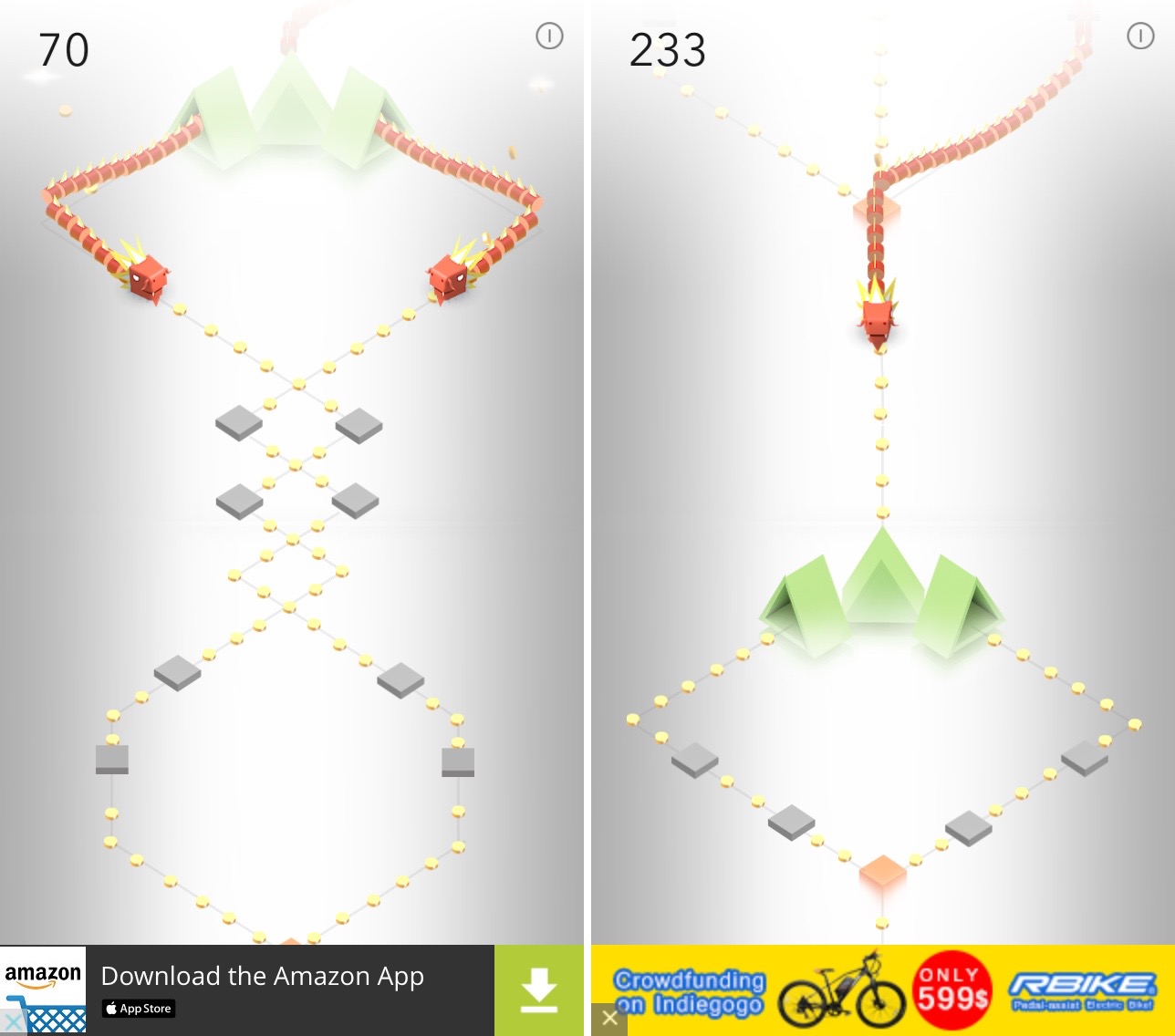 Those are the only controls.

But the game’s mechanics are nuanced. You have to learn how to time your jumps properly. If two obstacles are very close together and you don’t time it right, you will crash into the second one.

There are also times when your character will travel through a clone portal, which will produce two, three, or even four clones that run at the same speed along different tracks. Earn extra coins for keeping all clones running, but be mindful of their movement. All clones jump at the same time. If obstacles are placed differently on the rail, you could lose one or more of them. As long as you keep at least one character on the rail, you can keep going.

There is a special colored square that, when you cross, will recombine your clones into one. It will also slightly speed up your movement, making it even more important to have precise timing for your jumps.

The coins you earn by riding the rail are used to unlock a random character. Each new character costs 5,000 coins. The game is difficult to play, so your coin collecting can range from as low as 30 per run, up to around 300 or so. Clearly it would take a long time to earn 5,000 coins just to unlock one character.

So, to help you speed up the unlocking process, the game includes rewards for advertisement watching. Every four runs or so, you will be given the option to watch a 30-second ad. After you’ve watched the clip, you will earn 900 coins. It’s totally worth it to run through the ads in order to unlock new characters.

Some of the characters are really cool. My favorite that I’ve unlocked so far is the dragon. As he travels along the rail, he trails an ever-growing red body behind him that bounces over obstacles.

I can’t wait until I unlock the unicorn. But, since the unlock process is random, I may have to watch a lot of advertisements to finally get what I want. 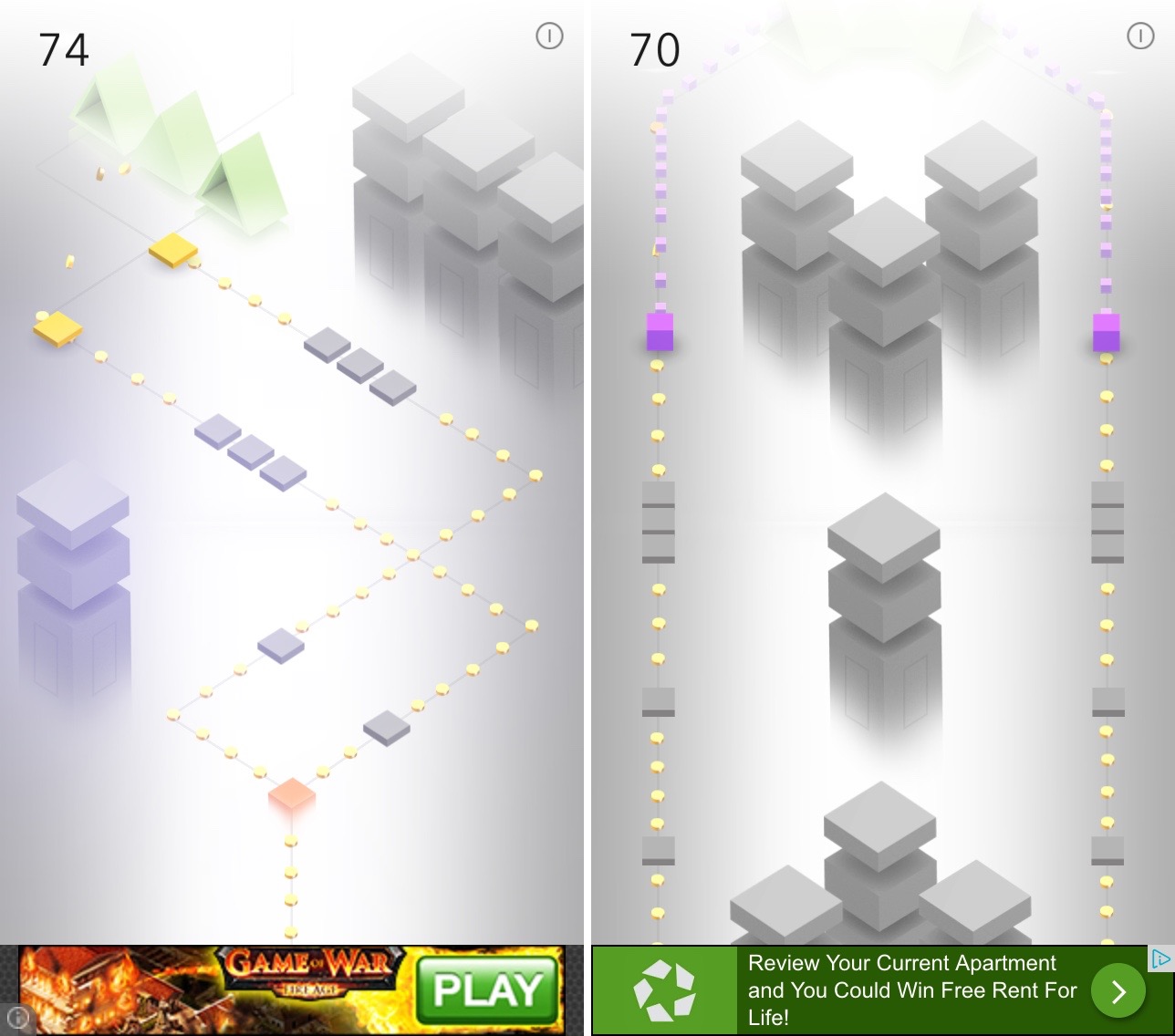 Although the game presents itself as a relaxing adventure, it actually requires some skill at timing. The more you play it, the more you realize that tapping and double tapping must be strategized in order for you to get far.

I’d like a couple of different soundtrack options. There is one piano tune that plays on a loop. It is perfectly suited to the game, but gets repetitive after a while.

Sky is free and advertisement supported. There are ad banners at the bottom of the screen that do get in the way if you aren’t careful, plus pop up full page ads that appear every few runs if you aren’t watching the videos. If you can’t stand the ads, you can remove them for $2, which is a small price to pay to an independent game company that put a lot more than $2 into making the game. The replay value is high since every level is randomly generated and the goal of unlocking new characters is very enticing.

If you like minimalist design and simple game mechanics, you will love this title. It looks good, plays smoothly, and keeps you coming back for more. Download in the App Store today.

The same game company made 2048, which is a minimalist puzzle game, as well as Slow Down, which is another tapping game.