If you plan on picking up a new iPhone 6s, you should be aware that the price of AppleCare+ just received an increase.

AppleCare+ is an enhancement to the basic AppleCare coverage that every new iPhone comes standard with. With AppleCare+, customers extend their hardware repair coverage and complimentary phone support to two years, and add up to two incidents of accidental damage coverage. Accidental damage covers anything from water damage, to drops, or other follies.

To take advantage of the accidental damage coverage, customers are required to pay a deductible fee for each accident. This fee is on top of the initial AppleCare+ signup fee.

When AppleCare+ initially debuted back in 2011, the signup fee was $99 and it the per-accident fee was a mere $49 for each event incurred. But over the last four years, the fees have slowly risen to the levels that they are today… 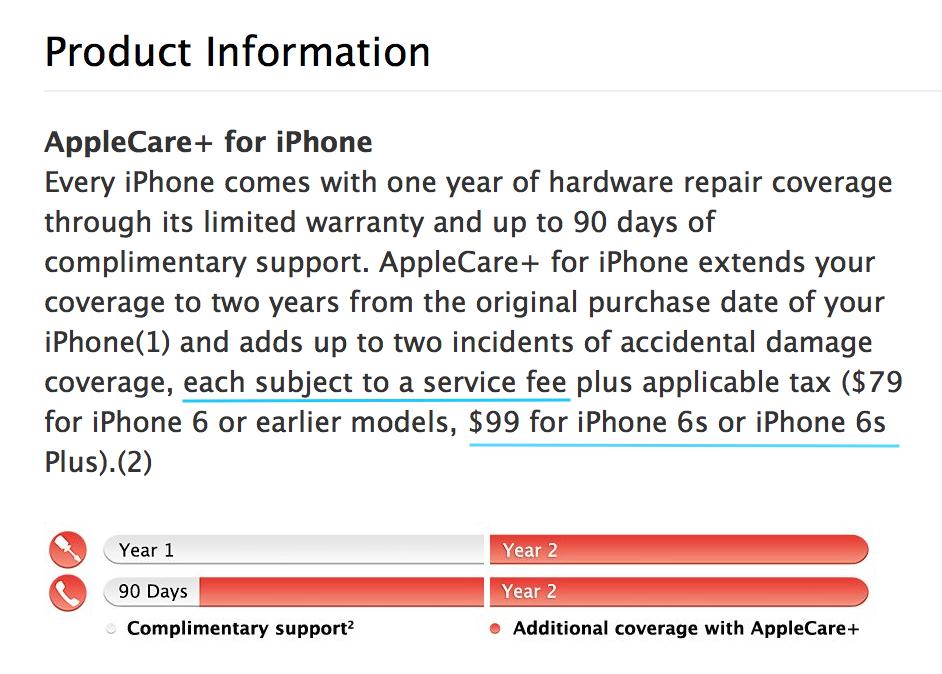 Here’s a breakdown of how the fees have risen over the years:

I don’t know about you, but I’m starting to sense a pattern here…

To be fair, the latest price increase is only for the new iPhone 6s and 6s Plus. Older models still fall under the old 2013 era levels with a $79 per-accident fee and a $99 initial fee.

Should you get AppleCare+?

That’s a good question. When AppleCare+ had the $49 deductible, it was a no-brainer for me, but at $99 per accident, it’s a lot harder to justify, especially because I tend to take good care of my iPhone. I know that accidents happen, though, so I can understand why people may feel compelled to get the coverage.

Here are a few questions to ask yourself:

I’ve never been a big case proponent, but the fact is they do protect your phones from damage. If you’re going to roll with a case and you’re generally good about treating your phone well, then you might want to consider putting that $129 in a bank for a rainy day. You can also use that $129 to invest in a nice case to protect your phone. Or you can always look into an extended warranty from a company like SquareTrade, as that tends to be cheaper than AppleCare+.

The nice thing about having an AppleCare+ extended coverage plan is peace of mind. You pretty much know that Apple is going to have replacement iPhones in stock, and you can usually get your phone replaced right on the spot if need be. If you like to use your iPhone sans case, I’d definitely consider having some sort of protection, and AppleCare+ is a good candidate even though it’s pretty expensive now.