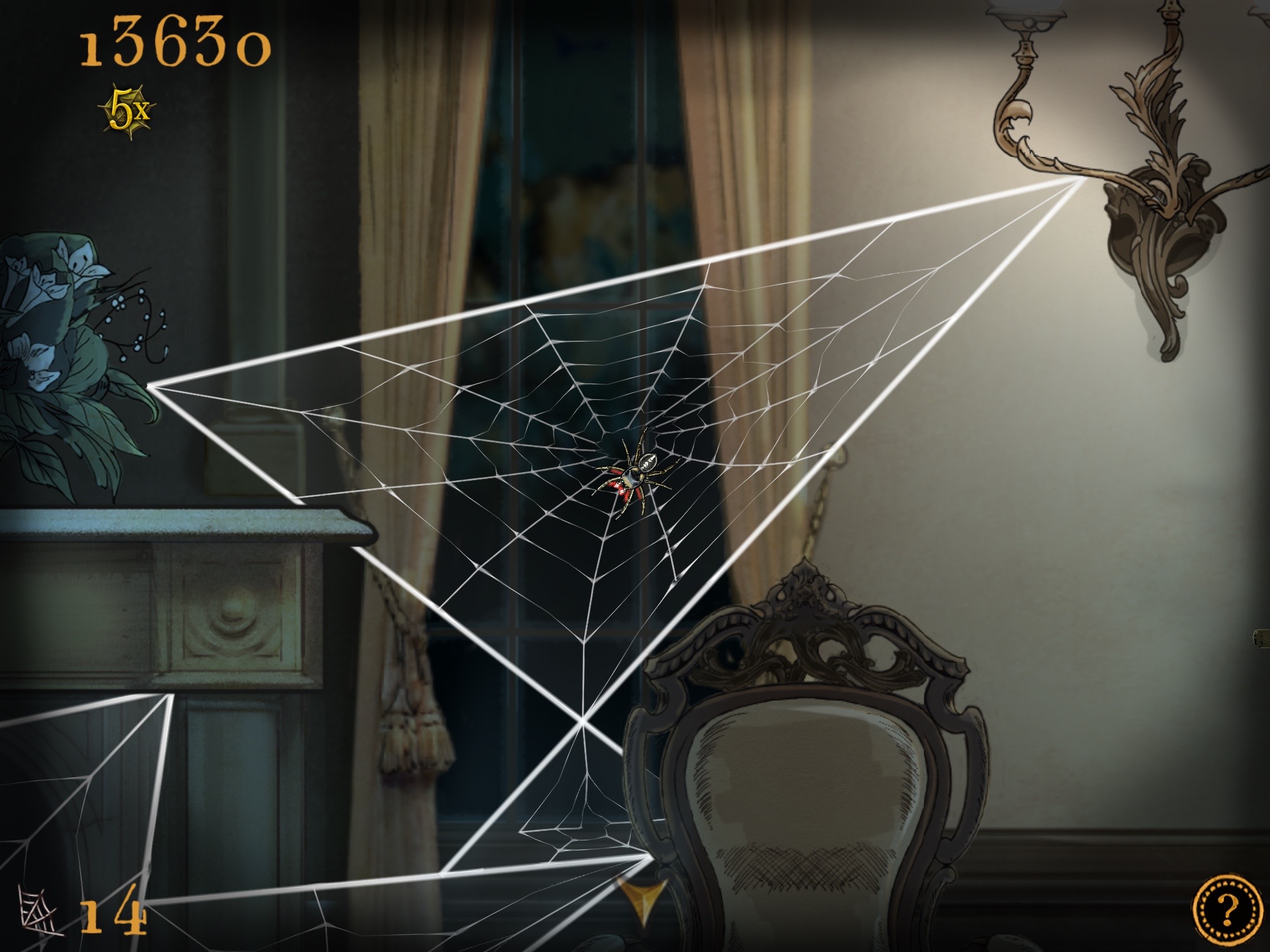 In practically every image of an abandoned building, especially an old house, there are dozens of spider webs spread out everywhere. You might wonder what it is those spiders are doing with their days and nights, free to roam around without fear of human interactions.

There are two main parts to this game. The first, and most important, is the web spinning. Players rack up points by creating intricate webs to trap nearby insects. The more victims stuck in your web that you eat without touching the ground, the higher your score.

The second part of this game is uncovering the truth about what happened before a mysterious estate, peppered with buildings, was abandoned. Finding a clue is as simple as exploring all areas of a room.

You are a small spider, wandering around a two-dimensional world. There are flies, bees, ants, and other yummy insects for your enjoyment. However, you must trap them in your web if you wish to eat them. The background is stationary with images of candlelit entryways, brightly lit gardens, and dusty attics.

Players can allow the game to read their current location for more complexities. Not only will the game refer to the town you are in, but will adjust the weather within the game based on the conditions in your area. So, if it is sunny and clear in my town, it will also be such in the game. If it is night time and raining, the game will be dark and wet. 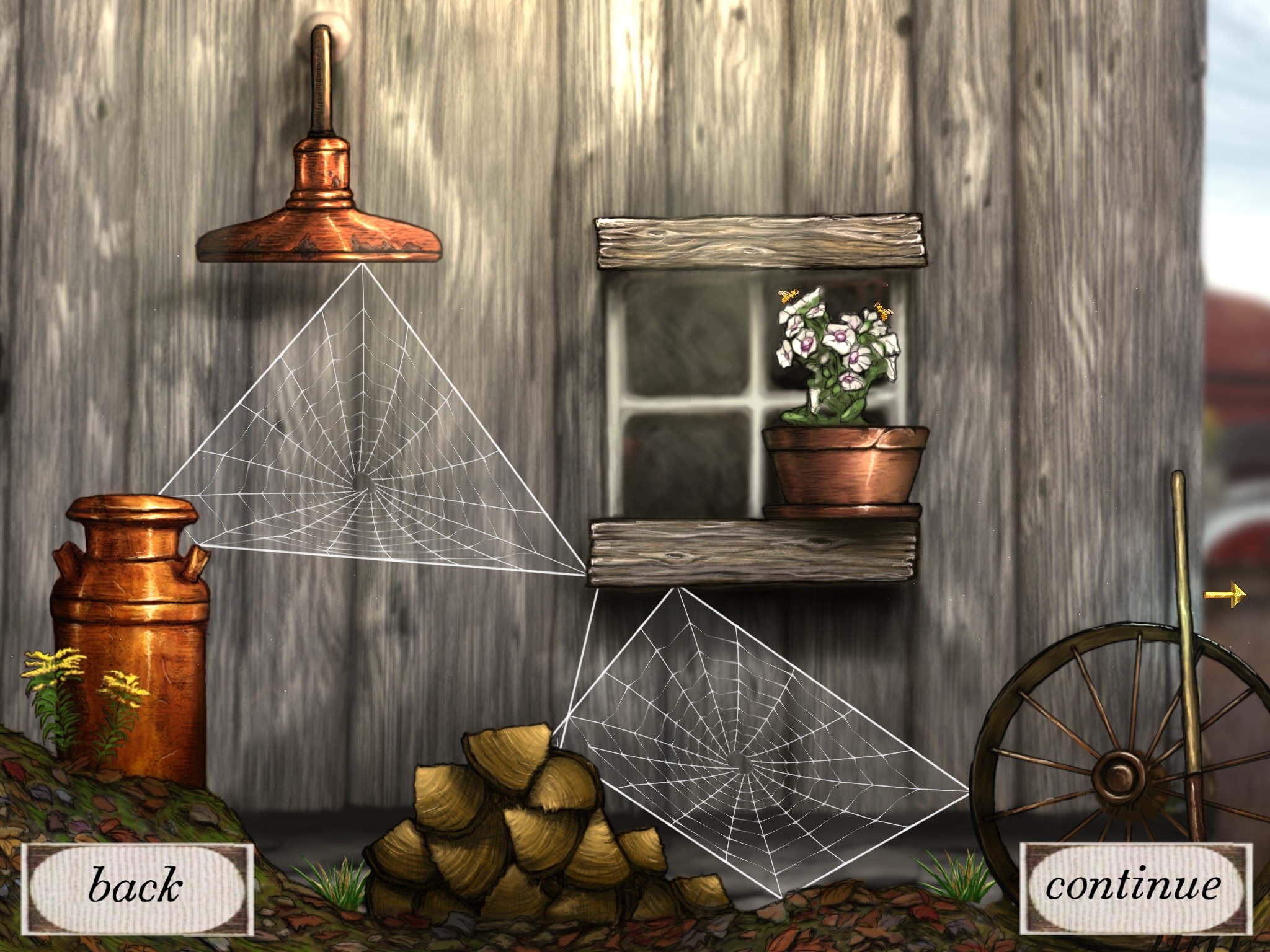 As a spider, you can crawl along any surface that isn’t slippery. Walk along walls, hang from the ceiling, and work your way around a vase of flowers. You can also jump across very far distances. Swipe across the screen in the direction you wish to go to get a good, long air jump.

To spin a web, tap the spider to initiate the thread. Then, swipe across the screen in a specific direction to jump across, web attached. If the landing spot isn’t too far, you will have created the first side of a web. Do the same thing enough times to make an enclosed shape (at least three sides) and a web will appear in the middle. If you’ve placed the web correctly, it will trap flying insects.

You have a limited amount of web silk. Each time you create a side, your silk count will go down. However, eating insects increase your silk. So, make sure you eat when you start to get low on web materials.

Sometimes, you can coax a bug into your trap by running up and giving them a hearty scare. For example, grasshoppers will hop right into your web if you run at them.

Some bugs won’t be tricked into getting trapped in your web. However, they can be captured and eaten if you bash into them. Swipe your finger across the screen in the direction of one of these bugs to knock it out and munch on it.

Some surfaces are slippery and you won’t be able to walk on them or attach a web to them. A slippery surface will have a slight sparkle around it.

There are also insects that can hurt you. If you get hit with one, you will lose silk. You can still kill them, but make sure they are either confused, or don’t see you before you attack.

In each area, there are a number of hidden clues to discover. If you go through a small hole in the ground, you may find a hidden clue. Unassuming switches might reveal secret rooms. Make sure to explore the entire room before leaving so you don’t miss anything. 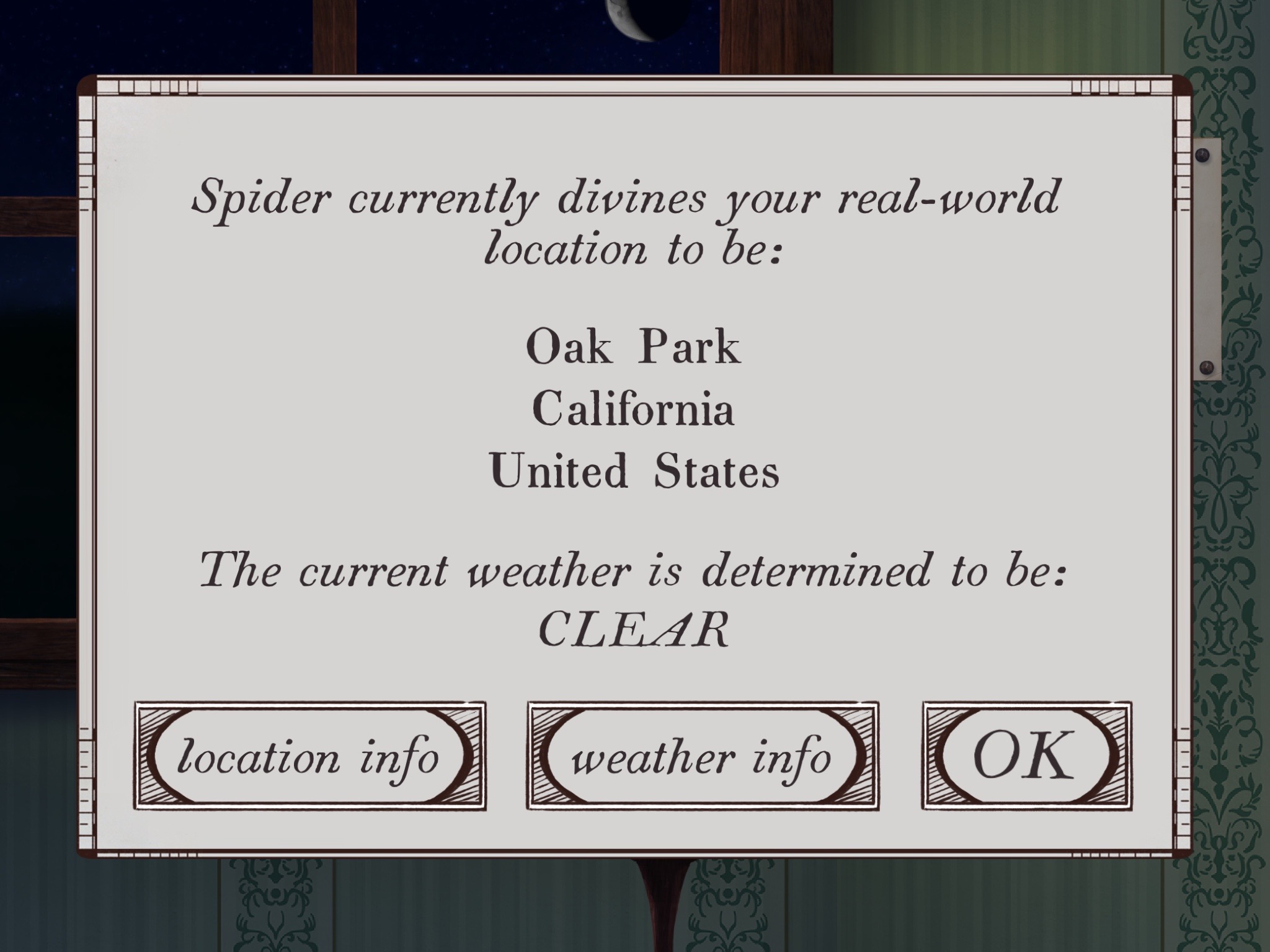 This is basically a physics based puzzle game, but it has so much more going on that it stands out in the genre. Players spend a lot of time trying to earn a high score by eating the biggest bug, but you can unlock a lot of achievements, which makes it more interesting than just a scoring game.

I often would accidentally spin a web when I didn’t mean to. The tap controls are very sensitive. I wish there were an undo button, maybe a limited number per level, so that I wouldn’t have to restart if I make a mistake, or lose out on much needed silk.

Spider: Rite of the Shrouded Moon costs $4.99, but does not bombard you with any in-app purchases. There are 30 levels across a number of different locations. The replay value is sky high. Not only can you replay for a better score, but you can replay under different weather conditions, or day and night, for new content.

As I mentioned before, this is basically a physics-based puzzle game. Players must use their skills to create a web to capture bugs to get a high score. However, that shouldn’t stop non-puzzle game players from checking it out. The game is well made and has lots of interesting mechanics for a more robust and unique adventure than your typical puzzler. Download it in the App Store today.

The game’s developer, Tiger Style has two more spider-based games. The Secret of Bryce Manor and Hornet Smash. Check them both out for more arachnid adventures.

What do you think of this web spinning game? Let us know in the comments below.