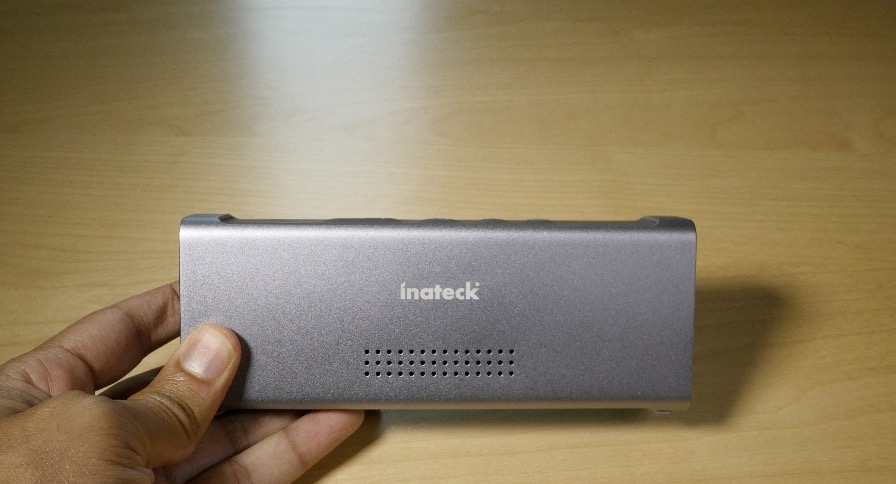 One of my biggest beefs with the iPhone and iPad is the lack of love given to sound output quality. Neither device features speakers that face the user, and the speakers that are there produce sound that’s just passable in my opinion. It’s definitely one of the biggest opportunity areas for improvement when it comes to iOS hardware.

Other devices do a much better job with sound quality. For example, the HTC One M9 features front-facing speakers, as does the just-released Motorola G 3rd-gen. Even tablets like the Nexus 9 feature front-firing speakers that sound relatively good. The iPhone and iPad? Not so much.

But that’s okay, because that’s what external speakers were made for. In fact, I just got my hands on stylish-looking Bluetooth speaker called the MercuryBox (42.99 with Amazon discount code below). It’s from a German company called Inateck, who sent us a sample unit for review.

Is this the perfect device to improve your iPhone’s sound output? 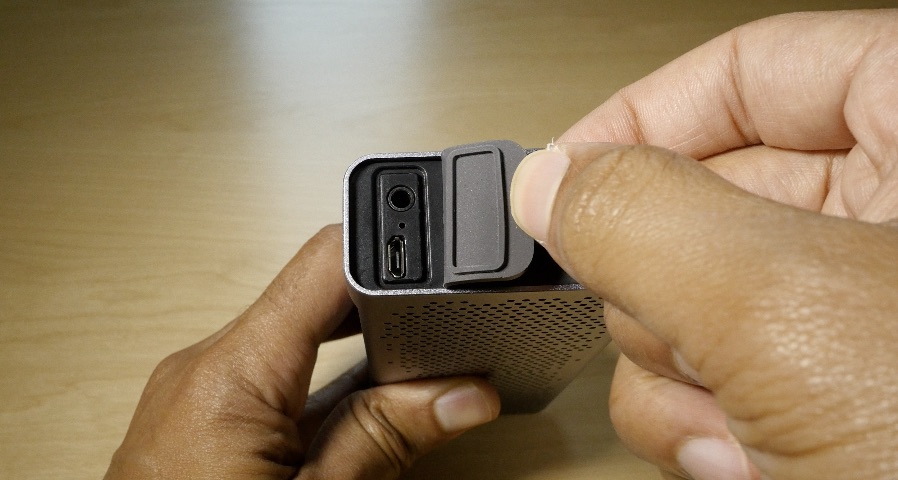 The Inateck MercuryBox is a Bluetooth speaker that looks great. Its design will remind you of the old Mac Pro’s design. It features an aluminum chassis with holes for speaker output, which will quickly rekindle thoughts of the classic Mac Pro look.

Flanking the aluminum chassis, are rubber strips on the side and top of the MercuryBox. The top of the box is also where the device’s buttons are located for performing basic functions like power, play/pause, etc. It even features a microphone for hands-free calling. 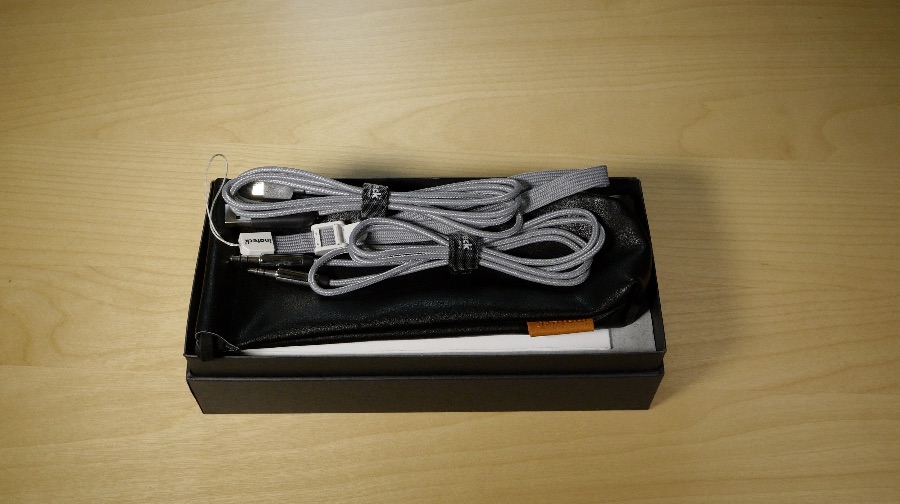 In case the inclusion of a lanyard wasn’t enough to clue you in, this is very much a portable device. It’s barely wider than an iPhone 6 Plus, and it’s about three iPhones thick.

This device is made to be carried around wherever you go, and its IPX-5 splash resistant rating means that you can even place it pool side, or in the little caddy that rests under your shower head. The IPX-5 rating means that the MercuryBox can put up with the occasional splash, but you shouldn’t think about soaking or submerging the device.

To further press the issue about the MercuryBox’s portability, it sports up to 15 hours of audio playback on a single charge to its internal battery. That’s more than enough to keep the party going from sun up to sun down. 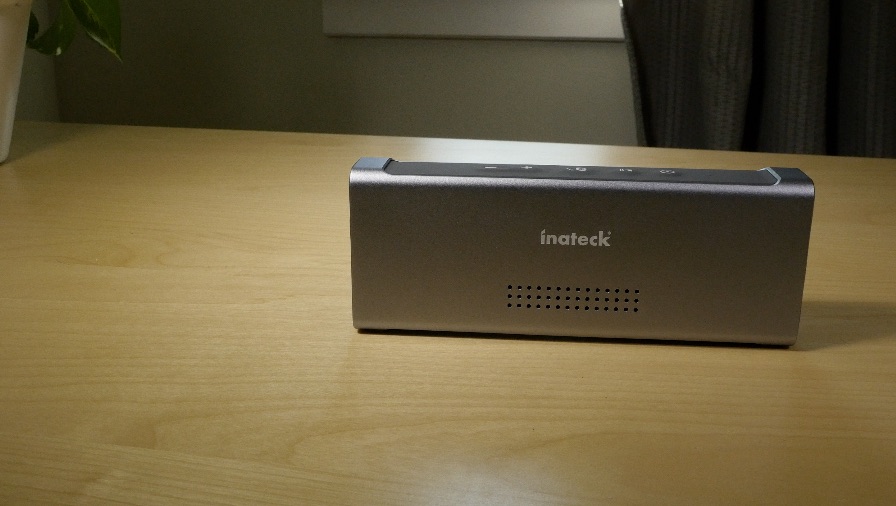 Pairing the MercuryBox, which is often a pain-point for Bluetooth devices, was exceptionally smooth and straightforward. There were no cumbersome PIN codes to enter or anything like that. You simply turn on the device, look for the Inateck speaker in your list of Bluetooth devices on your iPhone, and tap on Inateck. Seconds later, you’re good to go.

So far, so good, but let’s keep it real—sound quality is important, too. You’ll find that this device outputs much louder sound than your iPhone’s speaker, which is noticeable, especially on the low end. But remember, this device is still really small, and its small size means that it’s not going to turn the heads of an audiophile, or even someone mildly serious about sound quality. That said, it can easily fill a small room, and even in some outdoor situations, you can get by with the MercuryBox.

Given the MercuryBox’s small size, Inateck was obviously limited as to what type of drivers it could equip this thing with, so don’t expect it to knock pictures off your walls with booming bass. There is little on the low end side here, certainly more than your iPhone’s speaker output, but it’s still quite limited. I found that the MercuryBox didn’t provide much definition on the high or low ends, but again, given its size and price, that’s not entirely surprising.

Still, I think most casual listeners who just want something better than their iPhone’s speaker will appreciate what the MercuryBox has to offer. It’s better than listening to music from your iPhone’s speaker, it’s wireless, easy to set up, lasts all day, and it’s inexpensive. 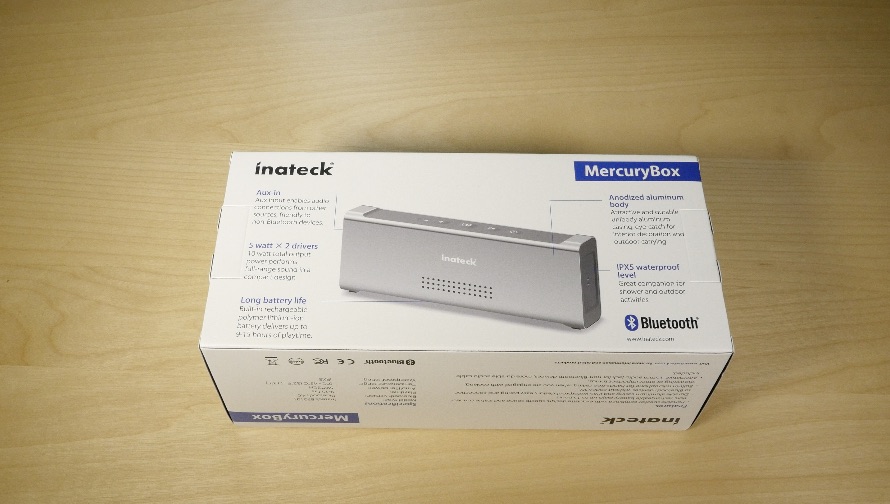 Speaking of pricing, Inateck is giving iDownloadBlog readers a temporary discount by means of a promotional code. During Amazon checkout if you use code PVR6K4CG, you can get an additional $12.00 off. That brings it to a total of $42.99 out the door on Amazon. I don’t know how long this code will be valid for, but you might want to act fast on that.

If the MercuryBox were much over $50, I don’t know how quick I’d be to recommend this speaker, because then you start encroaching into the territory of better sounding options. Audiophiles need not apply here, but for anyone else looking for a cheap portable speaker that looks like it was designed for an Apple device, the MercuryBox is decent choice.

Do you use a wireless Bluetooth speaker? In the market for one? If so, share your thoughts in the comments.