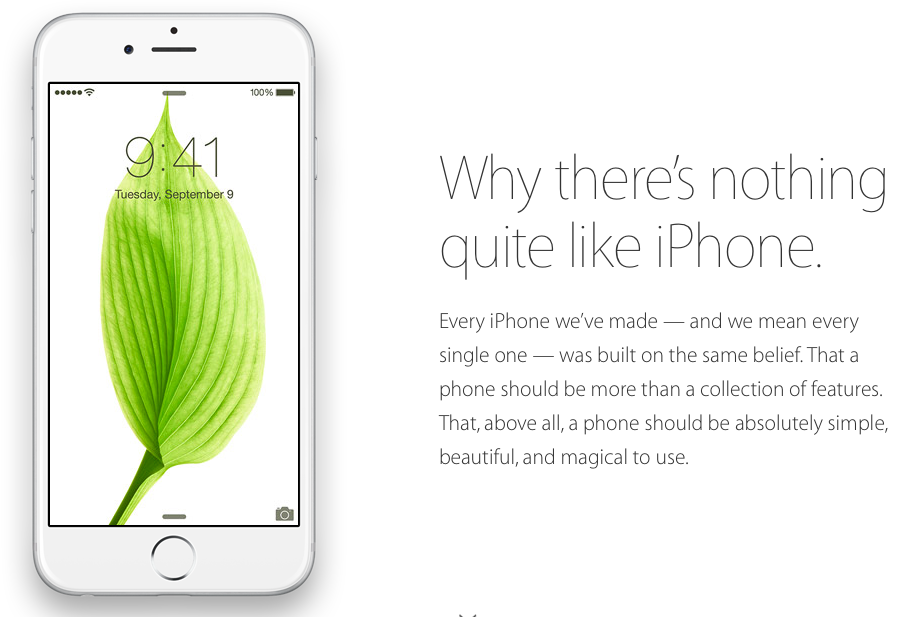 Apple on Friday kicked off a new interesting web campaign on its website which strives to lay out the reasons for the iPhone’s uniqueness.

Delivered under the tagline “Why there’s nothing quite like iPhone” and accompanying its “If it’s not an iPhone, it’s not an iPhone” series of television commercials, the new webpage goes through a few key aspects of the iPhone.

Some of the highlights include the iPhone’s tightly integrated design, strong security, powerful imaging capabilities, robust messaging, privacy and much more.

Noting the iPhone’s hardware and software were designed under the same roof by “people who frequently see each other,” Apple highlights its major advantage over Android: software updates delivered at once to hundreds of millions of devices in the wild.

“And whenever there are shiny, new software updates with shiny, new features, you should be able to sit back, relax, and know your phone will get them,” reads the webpage. “And be compatible with them. For years. For free.” 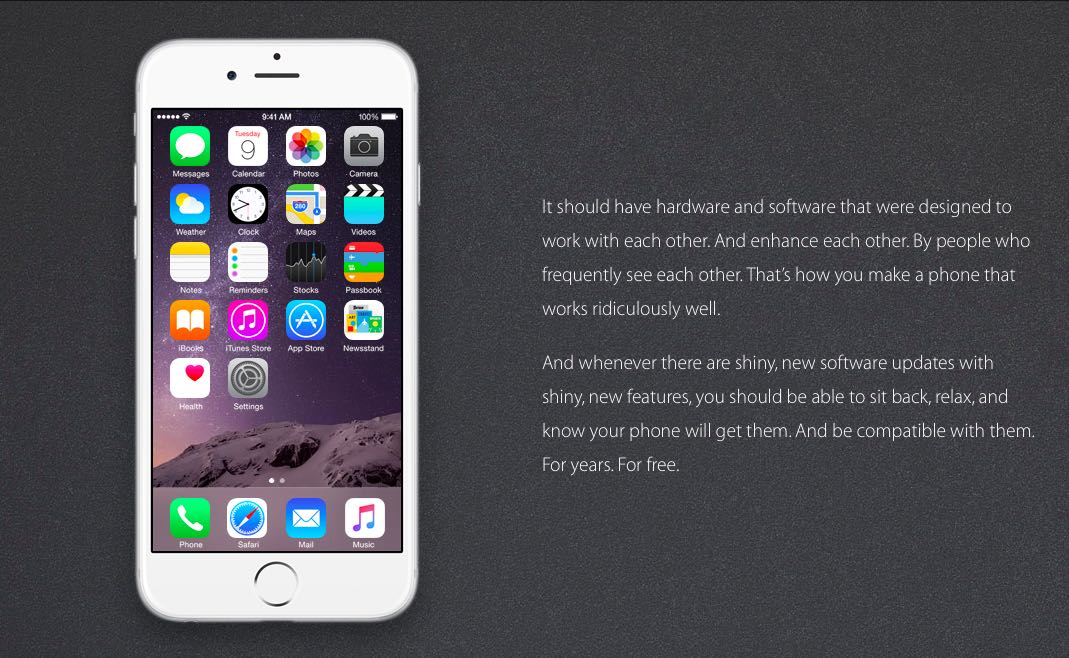 According to Apple’s own data, iOS 8 was found on a whopping 85 percent of iPhones, iPod touches and iPads in the wild less than ten months following the software’s release. iOS 8.4, for example, was able to match or surpass the adoption rate of Android KitKat/Jelly Bean in just one week following its release. The two Android editions have been around for two or more years.

As for the iPhone’s hardware/software synergy, the company drove this point home with a recent television commercial which plays on the fact that Apple is one of the few companies that produces both.

The iPhone’s camera “makes it easy to take insanely great photos” and is “the world’s most popular camera,” says Apple, and Flickr agrees.

The company highlighted two new features of the camera on the latest iPhones: Focus Pixels and auto stabilization. In addition to camera hardware, Apple employs clever software trickery which greatly improves the quality of photos taken with an iPhone. Oh, and Apple builds its own signal image processor to control the camera and process images.

“What that means is, you don’t actually have to know what that means,” the webpage explains. “All you have to do is use it to see that taking photos and videos on iPhone is really. Flippin’. Amazing.”

In highlighting another advantage it has over Android, Apple mentions that the App Store has more than “a million and a half capable, beautiful, inspiring apps.”

While the company disregards the fact that many of the apps available on the store are fillers, the fact remains that many would-be switchers stay loyal to the iPhone due to high quality of apps resulting from Apple’s stringent requirements and human curation. 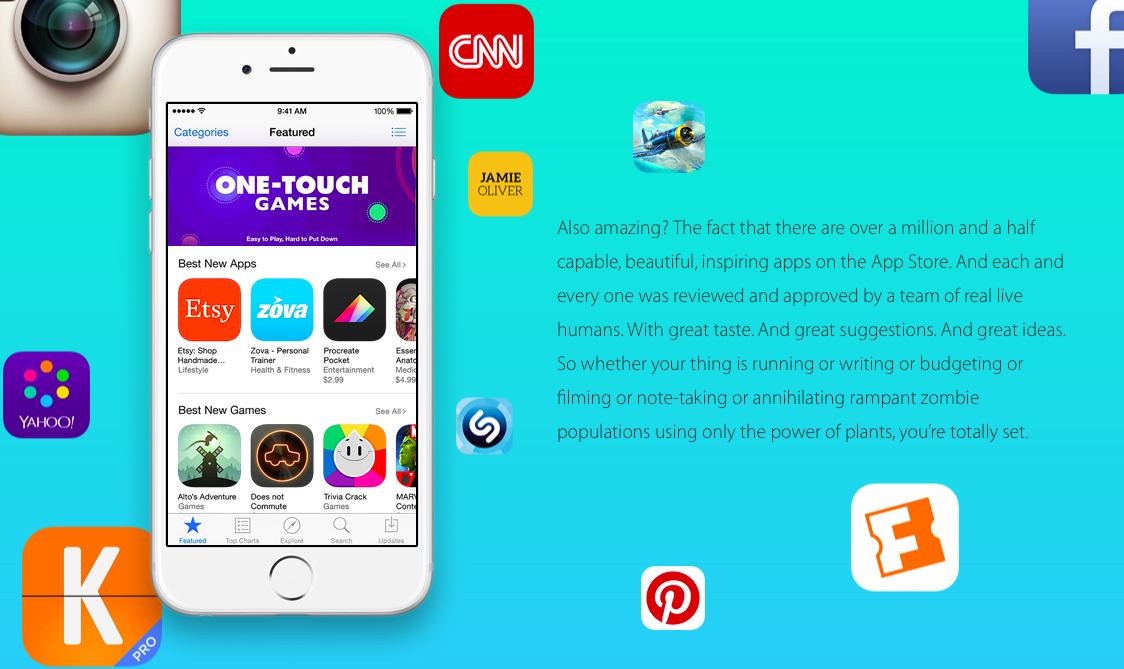 “Each and every one was reviewed and approved by a team of real live humans,” notes Apple. A recent commercial has highlighted the quantity, not the quality of applications available in the App Store, have a look at it below.

Though Apple doesn’t mention it, Android is the most malware-infested platform on the planet. This isn’t saying the iPhone is immune to security exploits, it’s not. But Apple for the most part has done a terrific job in the security department with stuff like hardware encryption, sandboxing, kernel address space layout randomization and other tricks.

“So let’s just say that iPhone and malware are practically strangers, and leave it at that,” the webpage reads.

In this segment, Apple doubles down on a rich set of privacy-related controls built into iOS that were designed to prevent apps from sucking your data into the cloud without your permission.

“If you want an app to show you restaurants within walking distance or to add a filter to your photo, that means the app needs to see your location or access your camera,” says the firm. 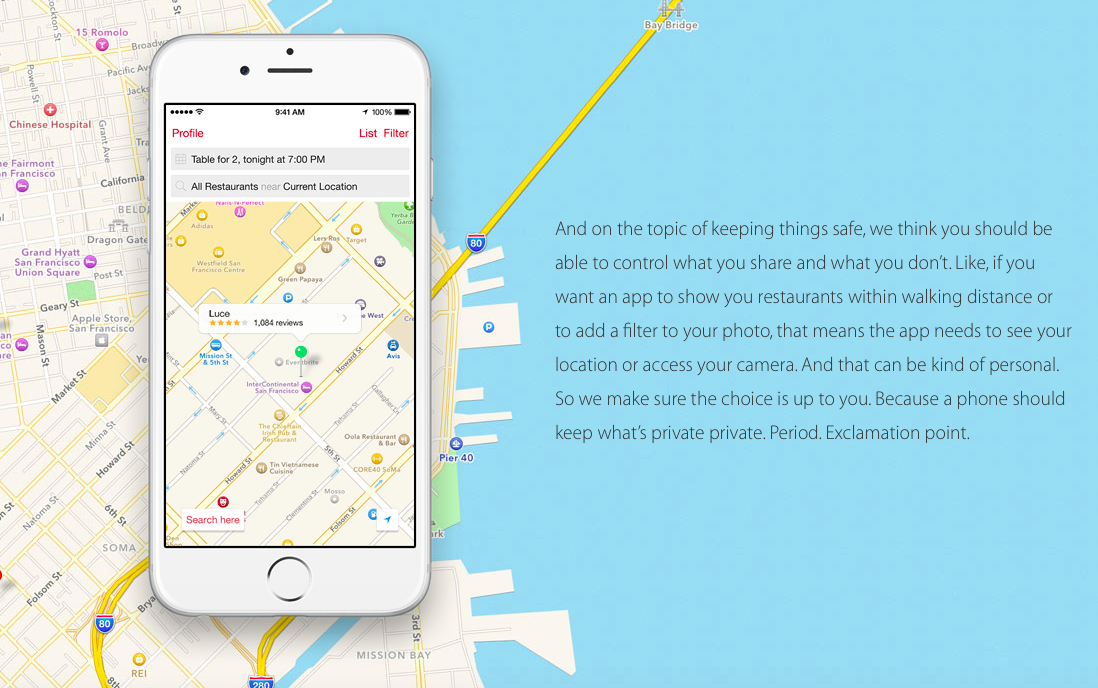 A few years ago, security researchers discovered some apps uploaded users’ contact lists and address books without user consent, as back then the iPhone lacked privacy controls to prevent that from happening. A mini scandal ensued soon after.

Apple was similarly criticized for unwanted In-App Purchases. As these incidents made headlines and late evening news, Apple, and later Google, went back to the drawing board to put new controls in place in order to prevent apps from pulling these kinds of tricks.

As a result, apps can no longer access the iPhone’s location, contacts, calendars, reminders, photos, Bluetooth, microphone, camera, or Health, HomeKit and Motion and Fitness data without the user being aware what’s going on.

Apple’s “painstakingly engineered” fingerprint sensor may have certain issues reading wet or dirty fingers. But as the iPhone never stores an image of it, nor does it sync fingerprint data with the cloud, you won’t lose sleep over potential security ramifications of using your finger to unlock the phone.

Touch ID turns your fingerprint into a mathematical model that cannot be turned back into an image. It’s stored encrypted into a secure place called the Secure Enclave that’s isolated from apps and the rest of the system. “We can’t see it. ‘They’ can’t see it. Not even you can see it,” says the webpage.

Another area where Apple’s sharp focus on privacy and security shines. 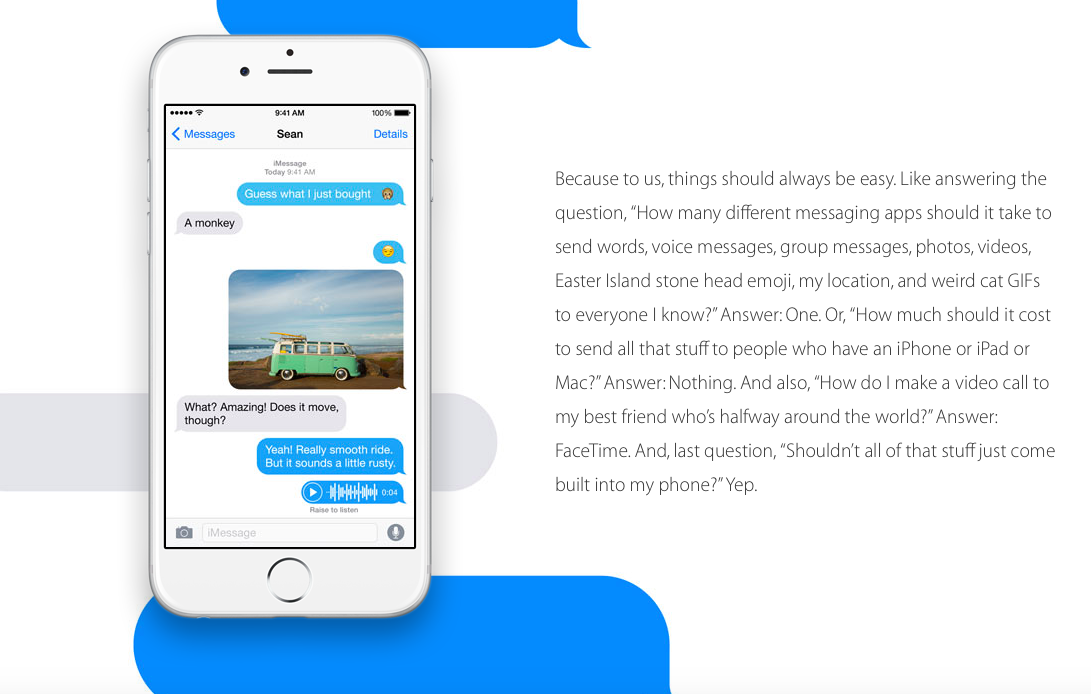 iPhones outfitted with Apple-designed M7 and M8 motion coprocessors can count steps, elevation and more, without waking the main processor.

And in a nod at iCloud, Apple explains that “your phone should also get along famously with your laptop and your tablet,” the firm remarks. “And be able to kick up the thermostat with a couple of taps. And put on “Love Shack”* from the backseat on command.”

The iPhone has long supported a number of assistive technologies for visually impaired people or users with hearing loss. These include VoiceOver that reads aloud what’s on the screen, Switch Control for navigating the phone using switches and more.

Yesterday, the company started highlighting apps with specialized accessibility features in celebration of the 25th anniversary of the Americans with Disabilities Act. Furthermore, Apple’s VoiceOver technology won an award earlier in the year from the American Foundation for the Blind.

One of the reasons why people who are new to Apple stay loyal to the company is its highly rated support. No other technology company allows you to waltz inside one of its 457 retail stores and get expert advice, in most cases at no cost, at the Genius bar without anyone watching nervously over your shoulder or overenthusiastic employees following you around and attempting to upsell you to the latest thing. 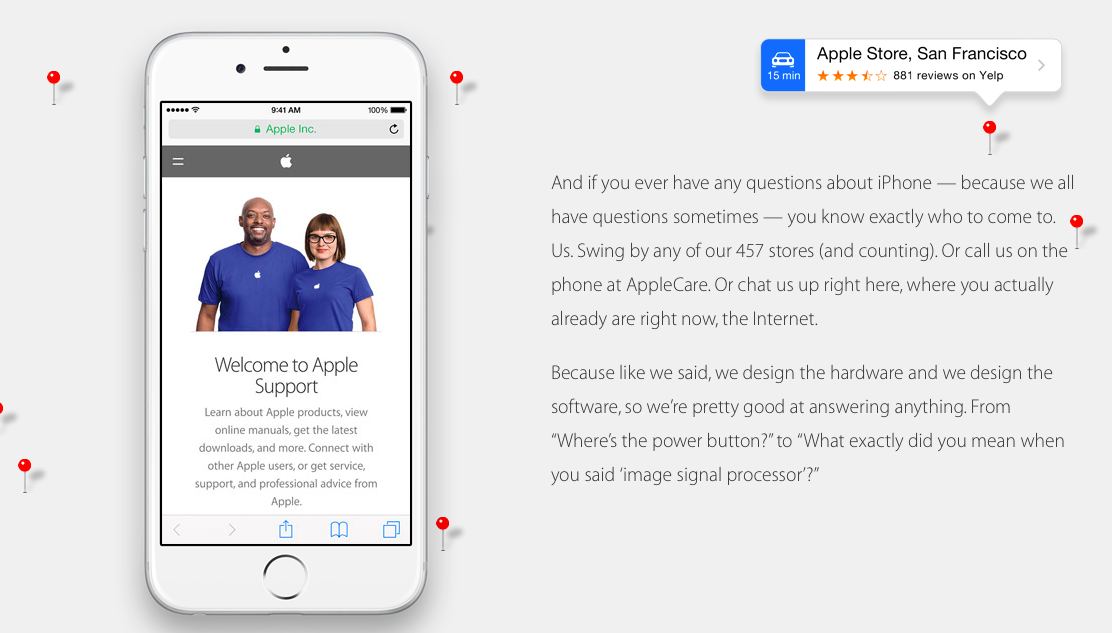 And with that, we wrap up the main talking points of Apple’s new campaign. 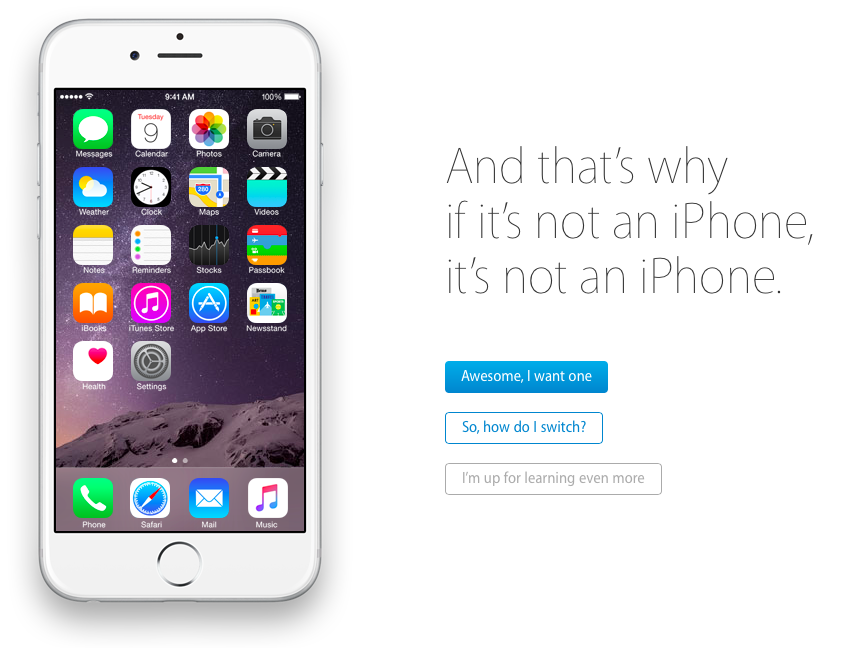 If you scroll down to the bottom of the webpage, you’ll notice options to buy an iPhone, get help on switching and an ‘I’m up for learning even more’ button which takes you to the iPhone 6 product page.

The whole thing has a playful tone to it and not once does Apple mention Android or poke fun at competitors, at least not directly. This is marketing at its best and whoever did this, Apple, you’re not paying them enough!

But don’t take my word for it, hop over to Apple’s website and check out the full web campaign for yourself.