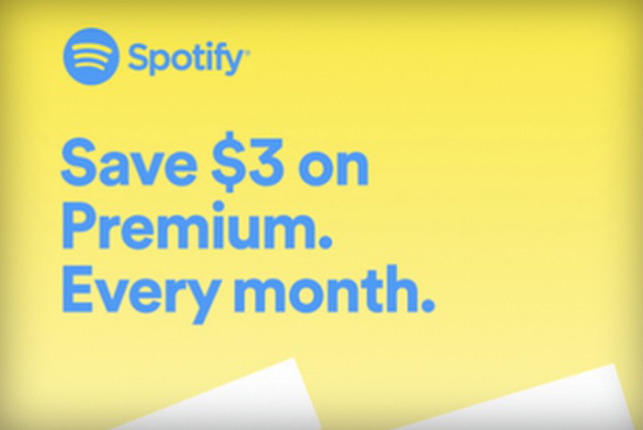 Presumably feeling the heat from Apple Music, Spotify has cunningly created a smart workaround for the so-called Apple tax, a 30 percent cut the company makes on sales of content subscriptions sold within apps.

Normally, when you upgrade to Spotify Premium in their iPhone and iPad, Apple brings up a standard prompt to confirm your purchase through the iTunes billing system. For those unaware, all in-app subscriptions are subject to the same 70:30 revenue split like apps sold on the App Store and Mac App Store.

But as The Verge said Wednesday, Spotify is employing new tactics seeking to encourage people who would subscribe to their Premium through the iPhone app to instead transfer their account onto the web and save $3 per month in the process.

An anti-iTunes public service announcement that Spotify sent via email invites iPhone customers to stop paying for Premium subscriptions through Apple’s In-App Subscription system and instead sign up for the Premium tier on the web and “save $3, every month.”

“We like you just the way you are. Don’t change. Ever,” opens the smartly-worded email.

“But if you want to change how much you pay for Spotify Premium, we are here to help,” continues the message. Making note of the fact that Spotify Premium costs $9.99 per month on the web versus $12.99 on iTunes, the email blast goes on to underscore that “Apple charges 30 percent on all payments made through iTunes.”

“You can get the exactly same Spotify for $9.99 per month” if you switch your payments to Spotify.com. “There are no transaction costs and you’ll save money,” argues the Swedish streaming-music startup.

Spotify, like many other service providers who take advantage of the iTunes billing system, raise prices for in-app iPhone content in order to account for the 30 percent in revenues lost to Apple.

Premium subscriptions purchased via Spotify for iPhone are priced at $12.99, while the same subscription on the web costs $9.99 per month, like Apple Music. 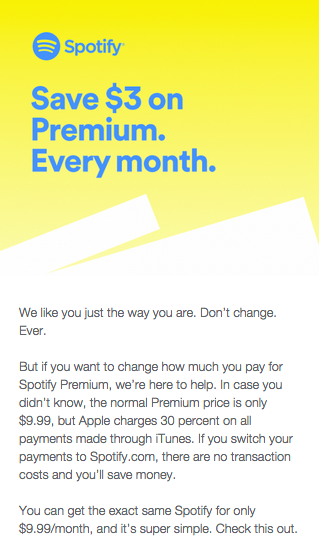 Spotify is instructing users to disable auto-renew on their $12.99 per month App Store subscription. As soon as their current subscription ends, users are advised to sign up for the $9.99 Premium account on the web, saving $3 per month, every month.

“Pardon us if you can’t do this immediately. Your current plan needs to end first,” Spotify says.

As of last month, Spotify had 75 million active users and 20 million paid subscribers.

No matter how you look at it, it is indeed cheaper to subscribe to Spotify Premium on the web than through iTunes. On an annual basis, you could save yourself a cool $36 by leaving the convenience of one-tap subscription purchases through iTunes.

The question is, will you go down that route?

Spotify’s free of charge streaming client is available in the App Store.