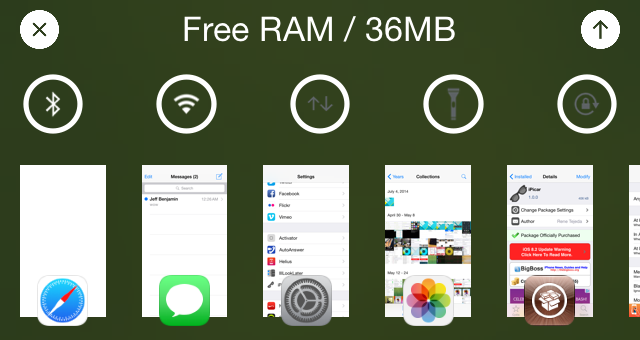 Alternatum is yet another jailbreak tweak that piggybacks on the Reachability feature introduced with the iPhone 6 and iPhone 6 Plus. It allows you to add a host of new features to the Reachability view such as an app switcher, toggles and more.

Unfortunately, I don’t currently own any jailbroken devices that feature Reachability, but Alternatum does bring the ability to use a simple Activator gesture to mimic Reachability. Does it work well?

I was able to use Alternatum tweak on my iPod touch, but the experience wasn’t exactly great.

First of all, let me just state that some of the problems could totally be with my 5th generation iPod touch. The hardware in this device is so outdated, that everything seems to run a step slower on iOS 8.

Invoking Alternatum via the Activator gesture I assigned—a double-tap on the status bar—resulted in a 2-3 second lag before the Alternatum interface even displayed on screen. From there it was a mixed bag of functionality, coupled with plenty of crashes and reboots into safe mode.

Assigning an Activator gesture to pseudo-Reachability

It’s unfortunate, because from its design, I can tell that Alternatum has the potential to be a solid tweak. It places an app switcher in the Reachabilty view, and retains all of the functionality of the stock App Switcher, including the ability to close apps by sliding up on their app cards.

Alternatum also features toggles for switching pertinent system features on or off, and a readout of available RAM. In the words, it packs quite a bit of practical functionality in the Reachability view.

Sadly, I wasn’t able to use the tweak to its full potential, but I wasn’t able to fully determine if this was the tweak’s fault, my slow iPod touch’s fault, or a combination of the two. I’m going to go out on the limb and say it’s the latter, because although the tweak was slow on my iPod touch, I doubt the safe mode resprings were the fault of the turtle-ish hardware.

You can find Alternatum for $1.00 on Cydia’s BigBoss repo. What do you think about this tweak? Does having an app switcher in the Reachability view sound like a thing that you’d like to have? If you have a faster jailbroken device like an iPhone 6, then I might recommend giving it a try.

Please share your thoughts and experiences with the tweak down below in the comments.