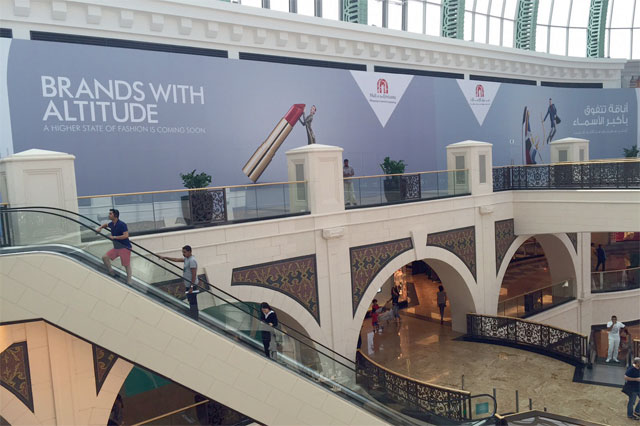 A report Monday by the Khaleej Times says Apple will be opening the world’s largest retail store in Dubai, the most populous city in the United Arab Emirates (UAE) with population of more than 2 million people.

In fact, not only will it file as the world’s largest Apple Store, but also as UAE’s very first Apple Store, too. Located at Dubai’s Mall of the Emirates, the store is currently under construction and is expected to open doors to fans in August 2015. Dubai is a popular tourist destination known for its luxury goods market and high-profile shopping malls.

“Apple’s first store in the Middle East will be located at Mall of the Emirates and it will be the world’s largest retail store of the iPhone maker,” unnamed sources have reportedly confirmed to Khaleej Times.

Mall of the Emirates packs in 700+ stores with nearly a hundred designer brands. In addition, the Mall is home to a pair of five-star hotels and the Gulf’s first indoor ski resort with five ski runs.

Currently, Apple lacks the official first-party retail presence in the oil-rich United Arab Emirates, a 10 million people country located in the southeast end of the Arabian Peninsula on the Persian Gulf and the nineteenth richest country in the world.

Apple is ranked second in the Emirates in terms of unit sales, after Samsung. Apple sells iPhones in the region through Etisalat and du, its authorized distributors, in addition to a few other retailers like Sharaf DG, Jumbo Electronics, Plug Ins and Virgin Megastore and premium resellers such as iStyle. These companies carry Apple products at around a hundred locations across Dubai, including all terminals at Dubai International airport.

As shown on the photo above, the entrance to the 50,000-sqare foot store is dressed up behind the curtain. It’s close to the new Fashion District in the Mall with the main entrance most probably from level 2.

Abu Dhabi’s newly opened Yas Mall is likely to host the second Apple store in the UAE, the report adds.

In August 2014, ifoAppleStore spotted Apple job listings for the complete range of retail store positions in the Emirates, from Store and Market Leader, Manager, Expert, Creative and Specialist.

Pictured below: the Mall of Emirates’ interior.

The listings also included the Apple Store Leader Program, a 24-month development program for those who have just graduated from higher education. It’s interesting that Apple opened its regional headquarters in Dubai’s Emaar Square earlier this year. The Apple Online Store opened for business in the Emirates back in 2011.

Apple CEO in February 2014 visited the Al Wahda Mall in Abu Dhabi and the Dubai Mall in Dubai, meeting with a number of independent Apple resellers in the region as well as UAE’s Prime Minister Shaikh Mohammed bin Rashid Al Maktoum and other officials.

A report in August 2014 by the Middle East luxury lifestyle magazine Edgar claimed the upcoming Dubai store “will be the biggest Apple has ever built,” adding the Cupertino firm originally planned to replace the current cinema complex.