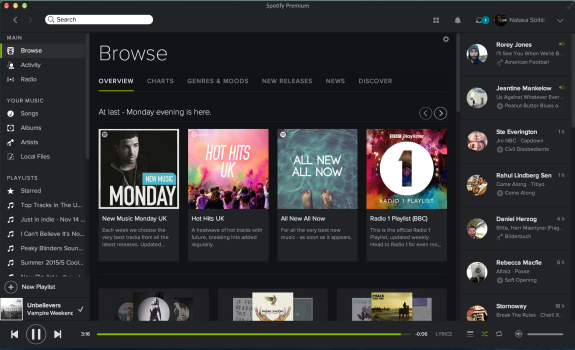 In another sign that Apple may have conspired with major record labels to kill free music streaming, Digital Music News is now reporting that both Universal Music Group and Sony Music Entertainment are pressuring Spotify, the leading subscription streaming-music service, to end its free, ad-supported service and instead limit music lovers to a three-month free trial.

As previously reported, Apple’s alleged backing of these efforts have prompted scrutiny from the United States Department of Justice, the Federal Trade Commission and the European Union’s Competition Commission into Apple’s business practices in the music space.

The three-month “proposal” would allow current free-access subscribers to continue their plans for six months, while new users would be limited to a three-month trial only.

“It’s weaning them off free, is one way to think about it, while making [Spotify] more in line with [other streaming services],” according to one source with knowledge of the discussions.

Artists and labels grouped into ’Emerging’ or ‘Up-and-coming’ playlists would be able to optionally extend past the three-month free trial, should they choose so.

Another idea music labels are proposing to Spotify: an open-access, non-interactive radio feature designed to encourage a faster migration towards premium monthly plans.

On the other hand, the privacy issue coupled with the role YouTube is playing in all of this have attributed to Warner Music Group’s nervousness that this is “not really going to work out and that YouTube can’t really be controlled.”

You know to be crystal clear, piracy is zero revenue, it’s the theft of intellectual property, and it’s not good for anyone. So all of these models are better than piracy, that’s number one.

So I think that before people conclude that freemium should be burnt at the stake, we should think very carefully about the consequences.

Spotify, which has sixty million listeners but only fifteen million paid accounts, isn’t too happy about the labels’ proposal. But the firm’s stance on the matter may not mean much as the labels have the power to corner Spotify into accepting its terms by threatening not to renew existing streaming contracts.

That may be why Spotify has offered massive cash advances and substantial equity stakes, or both, to secure major label licensing for its service.

The Verge said earlier this month that the U.S. government is probing Apple, suspecting the iPhone maker has been trying to “use its considerable power in the music industry” to stop record labels from renewing Spotify’s license to stream music through its free tier.

“All the way up to Tim Cook, these guys are cutthroat,” an unnamed music industry executive told the publication.

A week ago, Recode reported that the service won’t include a typical free version as Apple is hoping to offer a lengthy trial period and free song samples.

Stemming from its $3 billion Beats buy, it should be integrated into the revamped Music app in iOS 8.4 and offer exclusive content, an Android app, a built-in social network for artists and other perks, all for no more than ten bucks per month.