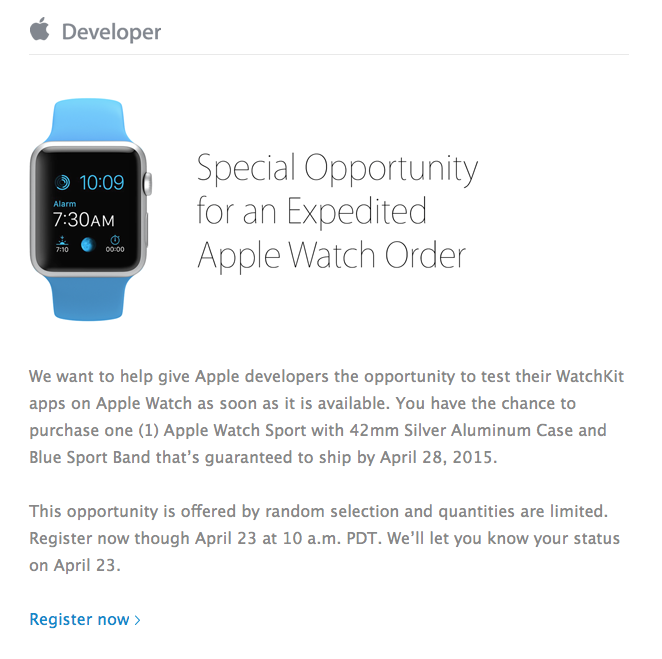 Apple on Tuesday began sending out emails to select iOS developers, giving them the chance to purchase a 42mm Apple Watch with a Blue Sport band that is guaranteed to arrive by April 28, 2015. Supplies are of course extremely limited, so Apple says that it is choosing the developers via a lottery system.

The move is part of an ongoing effort to help app developers test their WatchKit apps directly on Apple Watch, which can help them gather much better performance data than the Mac simulator. Prior to pre-orders, Apple was said to be inviting some developers to its Cupertino headquarters for such testing.

Here’s the full note from Apple, posted to Twitter by developer Amro Mousa:

We want to help give Apple developers the opportunity to test their WatchKit apps on Apple Watch as soon as it is available. You have the chance to purchase one (1) Apple Watch Sport with 42mm Silver Aluminum Case and Blue Sport Band that’s guaranteed to ship by April 28, 2015.

This opportunity is offered by random selection and quantities are limited. Register now though April 23 at 10 a.m. PDT. We’ll let you know your status on April 23.

The offer is particularly noteworthy given how constrained supplies are right now. Just minutes into the pre-order launch, several Watch models slipped from April 24 ship dates to mid-May and June. Now, all models show at least June ship dates, and it may be that long before Apple stores get any inventory.

Regardless, app developers are extremely important to the success of Apple Watch, so I don’t think anyone will mind Apple giving a select few of them the chance to order one of these Sport models with expedited shipping, for testing purposes (note this is a new purchase, not faster shipping for pre-orders).

Yesterday, Apple started notifying pre-order customers that it has begun preparing the initial batch of Apple Watches for shipping.