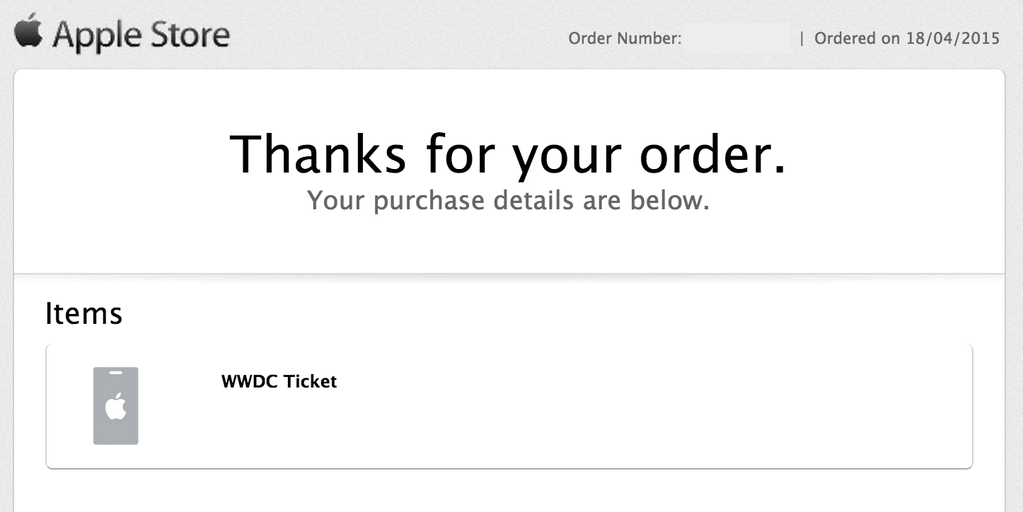 Were you lucky enough to get a ticket to the “epicenter of change”?

Instead of putting up tickets and letting the fastest purchase them within minutes, Apple now uses a lottery system to sell tickets to its World Wide Developers Conference.

The 2015 lottery for a chance to get a WWDC ticket ended at 10AM PST on Friday, and over the weekend, Apple began notifying developers who signed up for a chance to attend the five-day, twenty-sixth in a row WWDC if they get a ticket or not.

Developers who were lucky enough to win received an email from Apple, with a credit charged to their account. As you can see in the screenshot above, the $1,599 ticket shines with glee and makes us who weren’t picked a tad jealous.

If you weren’t lucky enough to get the chance to purchase a WWDC ticket, Apple says some sessions throughout the event will be live streamed, and most will be available to watch on-demand following the event. Suddenly that $1,599 feels a little better in my pocket.

Like prior WWDCs, this year’s developer conference will give Apple’s community and users around the world much more than a glimpse into the future of iOS and OS X. Apple is rumored to give previews of iOS 9, OS X 10.11, a new Apple TV, and Internet TV service.

Since it’s a developer event, Apple will hold events just for those who make apps:

The Apple Design Awards are on the agenda as well, which typically showcase the best new apps in the last year.

Are you purchasing a ticket?