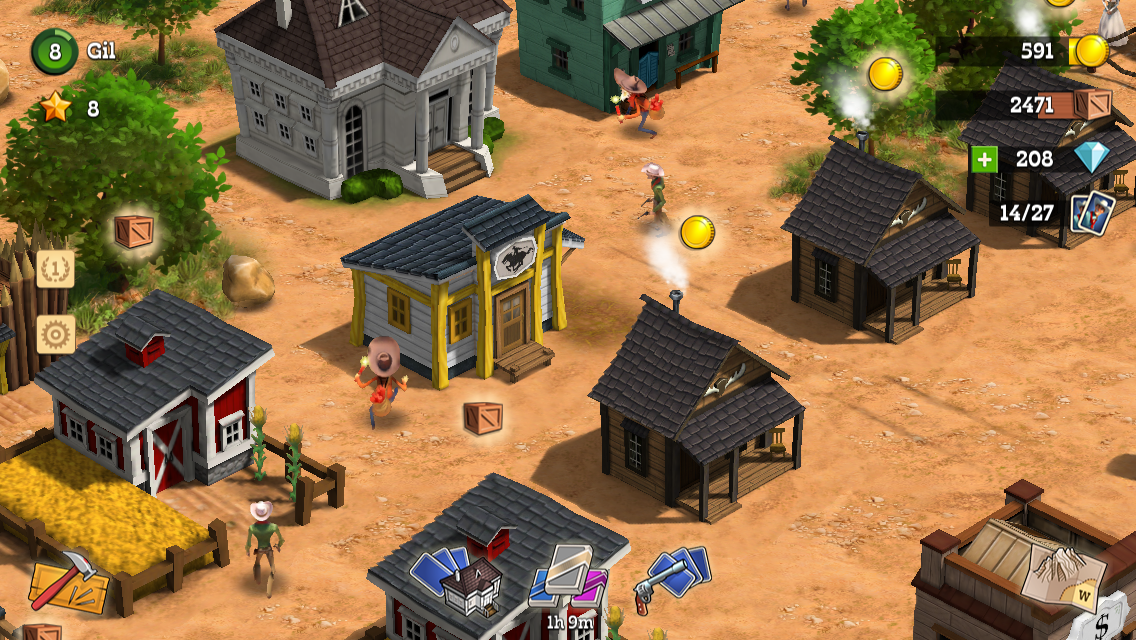 If there is anything that the HBO television show “Deadwood” has taught us, it is that building a life for yourself in the Old West was difficult. Whether you are trying to keep residents entertained with a lively saloon or protect your land from invaders, settling out West was dangerous.

Compass Point: West is a land expansion free-to-play game that puts players in the gold rush days, fighting to survive against bandits, bullies, and an oil tycoon with a bad attitude. We’ve got a game review of Compass Point: West for you today.

This title is very typical of a land expansion style resource management strategy game. Player construct buildings within their settlement to develop a booming town. Meanwhile, you must explore the West and turn abandoned settlements into money makers.

There is one interesting element that makes this game different from the average. Players recruit fighters by opening card decks in the saloon. As you build your posse of sidekicks, you can merge multiple cards to create one, stronger gunfighter. When your army is ready, use them to fight bandits who’ve taken over abandoned oilrigs.

Players control the growth of a small piece of land, which is viewed from above. You can zoom in or out to get a better look. When buildings are under construction, they are surrounded by planks and wood cranes for an authentic look. Townsfolk wander back and forth from building to building.

While battling for land rights, players drop their sidekicks into the designated zone and then wait while they take down the enemy and blow up the old buildings. You can zoom in close to see the action here, as well, but since the gunfighters act on their own, you won’t be doing much until the battle is over.

In the saloon, players can open up a deck and choose two cards from two hands of three. Building cards go into one section, while new sidekick members go into another. As the game progresses, you will eventually be able to open better decks for a price. 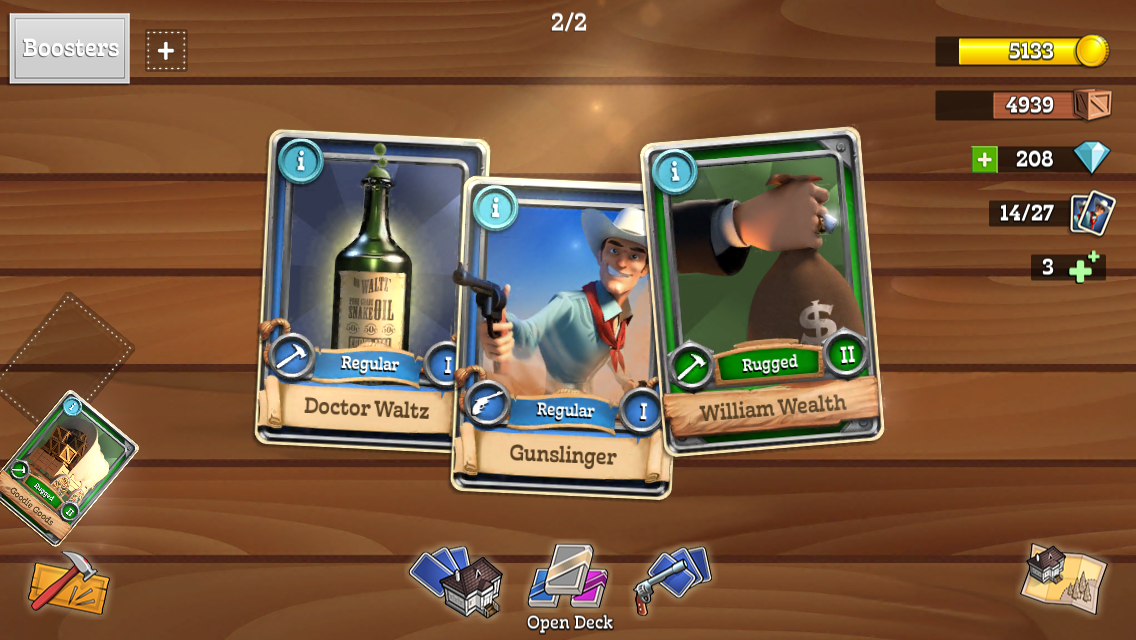 Once you’ve started building up your town, you will see that there are a couple of main tasks to take care of. First, build or upgrade buildings any time you have enough resources to do so. This will make your settlement stronger and yield more materials. Second, explore the wilderness and take over any abandoned settlements that have been overrun by bandits. Third, recruit a large, strong posse in the saloon by opening card decks whenever you can.

In the town, players are constantly planning to expand by constructing new buildings. Buildings fit into three categories; economy, which allows for more gold and materials, support, which covers such things as the saloon, a fort, and a medicine wagon to heal injured sidekicks, and the defense section, where you can hire specialists, like a Pinkerton agent, to protect your land.

In the saloon, about every two hours, you can open a deck and choose two cards. Build up your sidekicks to gain a strong posse that can invade and defeat the bad guys out in the wilderness.

When in battle, players can choose which sidekicks will go into the fight. Players have a limited number of battle points to play sidekicks, which can be upgraded with the fort. Sidekicks have a mind of their own, but players can set a marker that lets the posse know where to head first. Sometimes, it is better to go straight for the oilrig, other times, defeating the bandits first will help you win.

The game is free-to-play but offers a lot of ways to earn gold, materials, and diamonds. Construction is time based, but most buildings don’t take more than 15 minutes to upgrade. Plus, you can use special cards you’ve unlocked in order to speed up construction if you don’t want to spend diamonds. It does not feel like a cash grab style game. It has been nicely developed for easy playability without needing a lot of in-app purchases.

I find the battle aspect of the game to be very lackluster. I’d like to be able to tap the screen to tell my sidekicks where to go, or allow them to use special abilities in order to defeat the enemy. As it is, battles are hands-off for the most part.

Since Compass Point: West is free to play you would expect to be bombarded with in-app purchases. However, the mechanics allow for many opportunities to earn gold, diamonds, and materials. You can even watch a few game trailers every day for a chance to win thousands in gold or materials. The replay value is high, since you have to stop playing a lot during construction. It is the perfect game to check into on your lunch break, or when you get home from work.

I was pleasantly surprised by Compass Point: West’s game play delivery system. There is a lot of waiting around for buildings to be finished, but you don’t really feel like you have to spend real money to do anything. If you like resource management strategy games, I recommend picking this one up. It is available on the iPhone, iPad, and iPod touch. Download it in the App Store today.