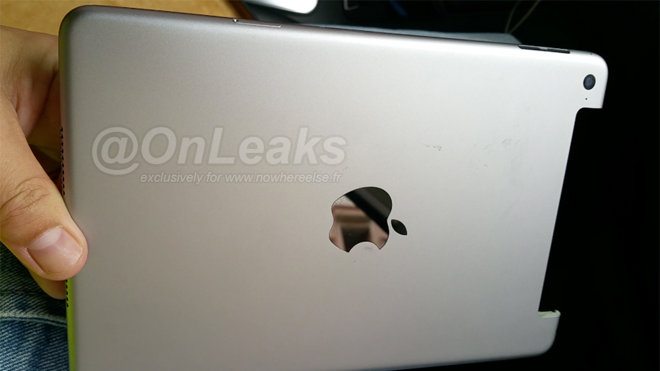 French website Nowehereelse has posted alleged photos of the unannounced “iPad mini 4” chassis, packing a design that brings it closer to the iPad Air 2, after the iPad mini’s humble refresh in the fall of 2014.

In a push to be more like the iPad Air 2, the photos show an iPad mini 4 with a removed orientation lock/mute switch from the right side of the device that’s been above the volume buttons on previous versions of the smaller tablet. There’s now a tiny microphone hole, like on the iPad mini’s big sister, in its place.

The rest of the alleged iPad mini 4 chassis is nothing too surprising: a cut-out at the top where a cellular LTE modem would go, a Lightning connector on the bottom, and 10 holes on each side for stereo speakers. Presumably it will keep its 7.9-inch Retina display, and may even pack a slimmer profile.

The leak on Tuesday makes a bit of sense. In early-March, Japan-based publication Macotakara reported the iPad mini 4 will feature an A8 processor and 802.11ac Wi-Fi – the same specifications found in the iPhone 6 and iPhone 6 Plus, but a step down from the speedier A8X chip found in the iPad Air 2.

The new iPad mini 4 may launch to much fanfare. In fall 2014, the iPad mini 3 disappointed many do to its lackluster. It kept the same internals and design, however added a Touch ID fingerprint scanner for added security.

There’s no word on when Apple may announced the new iPad mini.