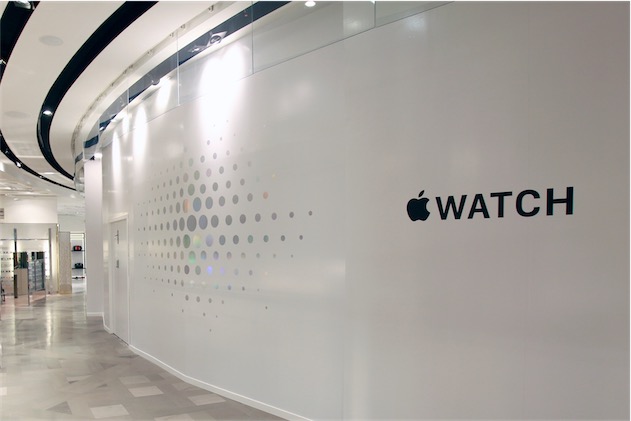 Apple on Friday announced (via iGen.fr) grand opening for Apple Watch stores-within-a-store located in high-end department stores in London, Paris and Tokyo. The company’s UK Retail website confirms that the Selfridges Apple Watch shop will open doors to business on Friday, April 10, at 9am local time.

Located on London’s 400 Oxford Street, the Selfridges shop is just across the popular Wonder Room shopping hall where a bunch of watch brands and jewelers operate their luxury shops. Apple previously said pre-orders for the wearable device will kick off on April 10.

The Wonder Room shopping hall, pictured below, near the Selfridges Apple Watch shop, is “a unique destination that plays host to the world’s most desirable brands,” including Tag Heuer, Bvlgari, Gucci, Cariter, Montblanc and Longines.

In the high-end Galeries Lafayette department store in Paris, France, the Apple Watch shop (pictured top of post) is located on the department store’s second floor and occupies four balcony sections in the arched setting. The upmarket department store itself is on Boulevard Haussmann in the 9th arrondissement of Paris.

Lastly, the Apple Watch shop is also sprucing up in the Isetan Shinjuku in Tokyo. The Apple Watch display is found on the department store’s ground floor.

Pictured above: Apple Watch shop at Galeries Lafayette in Paris.