Amazon has just upped the ante in the cloud-storage arena by announcing Thursday a pair of disruptive cloud storage plans, with a new Unlimited Everything tier available to store as many photographs, video clips and documents as you possibly have, for a flat fee of sixty bucks per year, a massive price reduction over previous prices.

Another, lower-priced tier called Unlimited Photos will keep an unlimited number of photos backed up in the Amazon cloud, and up to five gigabytes of videos and files, in exchange for twelve bucks per year, or just 99 cents per month.

Both new plans store your files securely on Amazon’s Cloud Drive services and are available now on the web.

Just to give you a feel of these deep price cuts, Amazon used to charge ten bucks per year for 20 gigabytes of Cloud Drive storage and a whopping $500 for 1TB of cloud storage.

Quickly, do the math in your head — that’s right, the new Unlimited Everything tier at sixty bucks per year undercuts the previous flagship tier by a factor of nearly ten, while at the same time upping storage capacity from 1TB to unlimited.

Here’s a breakdown of the new tiers:

How do the new tiers compare to other service?

Dropbox’s $99 per year plan caps out at 1TB of cloud storage, for example.

By the way, new customers get three months of Amazon Unlimited Photos and Unlimited Everything at no cost. Signing up for either plan will download a Cloud Drive desktop app which lets you upload your photos, videos and documents.

And of course, members of the $99 per year Amazon Prime service, as well as Fire device owners, are already enjoying the Unlimited Photos package at no additional cost. 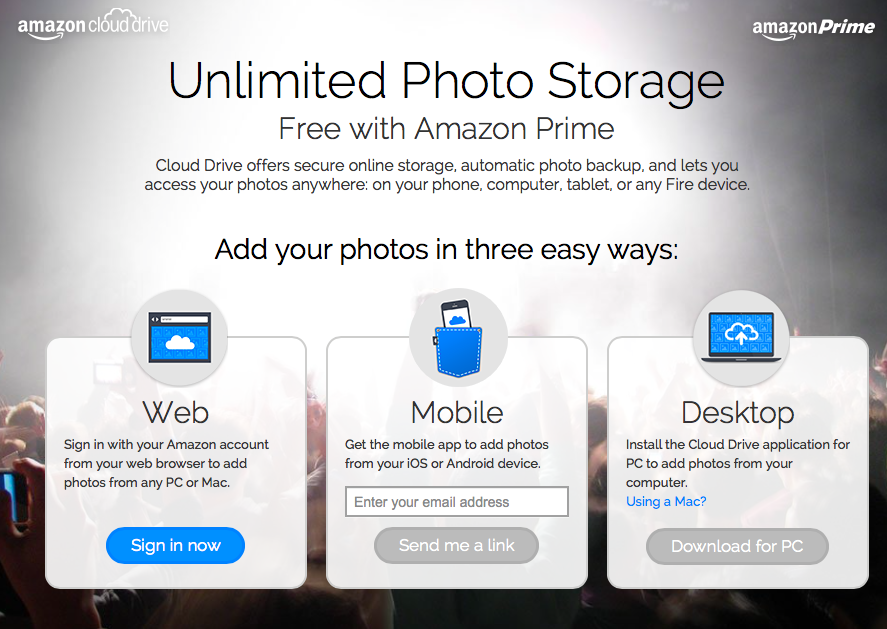 Unfortunately, Amazon’s iOS app doesn’t offer an option to upgrade to new storage tiers via Apple’s frictionless In-App Purchase mechanism so you’ll need to visit your iCloud Drive account on the web and add payment information to your account.

You can sign up for the new plans here.