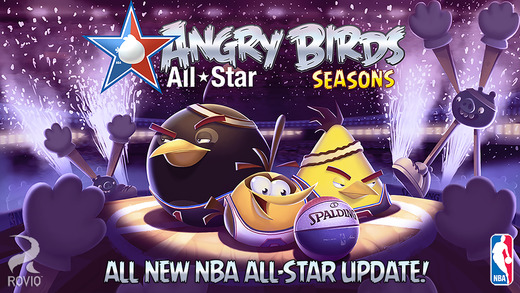 Apple has just named “Angry Birds Seasons” its App of the Week for this week. This means that from now through next Thursday, you’ll be able to download the popular game, which normally retails for $0.99, for free.

The Angry Birds franchise needs no introduction—Rovio’s slingshotting fowls have been downloaded over 2 billion times—and this seasonal version has proven to be a fan favorite. The current episode is NBA All-Star.

As irate as ever, Rovio’s feathery heroes celebrate holidays and pummel pigs all over the world in this seasonally themed outing. You’ll have a blast soaring through gorgeously designed stages based around St. Patrick’s Day, Chinese New Year, and even events like the NBA All-Star Game. These physics-based challenges are as tricky as Angry Birds fans would expect—but with your sling scope and other mighty power-ups, victory’s always near at hand.

And here’s a promo clip for Seasons:

Given that Angry Birds is more than 4 years old, it’s easy to understand why many folks might be tired of the bird-flinging antics. But this is still a solid game, and worth grabbing while it’s free for your Purchased tab.

You can find Angry Birds Seasons for both iPhone and iPad in the App Store for free.

Like app deals? Be sure to check out our daily App Recap.