Wednesday, TechCrunch relayed a new survey by market research firm Kantar Worldpanel which underscores a small victory in Apple’s global rivalry with Android as the company overtook Android vendors in terms of units shipped in the United States during the last three months of 2014.

Driven by the introduction of its larger-screened iPhone 6 and iPhone 6 Plus, Apple took a 47.7 percent share of the U.S. smartphone market. Android grabbed a 47.6 percent share and Windows Phone accounted for just 3.8 percent of smartphone sales.

Kantar chief of research Carolina Milanesi noted it’s “the slimmest 0.1 percent margin” he’s ever seen. Not only is Apple’s success the result of the iPhone 6 mania, but also due to “the strongest product portfolio” in Apple’s history.

“With a range of devices available at different price points in both contract and pre-pay Apple was able to take advantage of a weaker Android offering at the premium end of the market,” said Kantar.

Apple’s growth at the expense of Android was highlighted recently by CEO Tim Cook who noted that the new iPhones prompted more people to switch over from Android than any prior iPhone model.

Apple sold a record 74.5 million iPhones during the holiday quarter, a 46 percent growth, resulting in the most profitable quarter of any company ever. 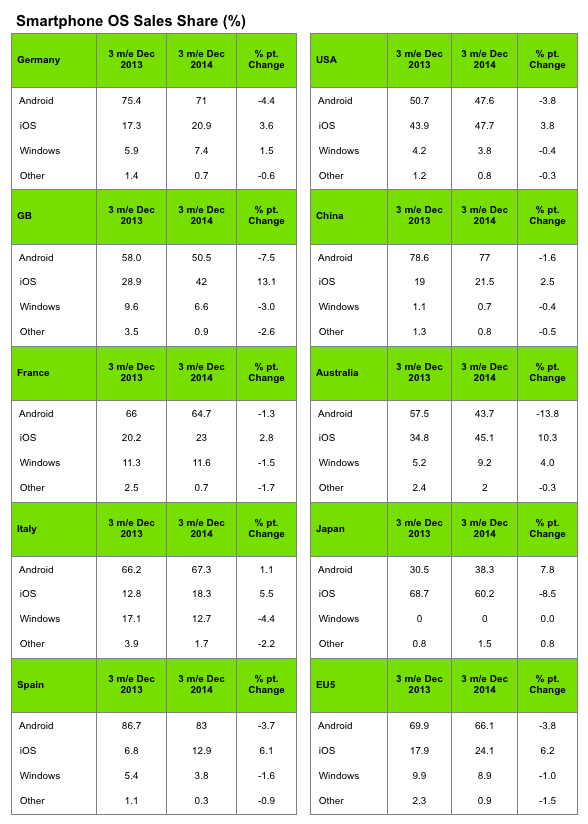 Although the iPhone is the best-selling smartphone in the US, followed by Samsung’s Galaxy S5, Google is going strong in Europe even though Android declined 3.8 percentage points overall to 66.1 percent share across the continent while iOS grew by 6.2 percentage points during the holiday quarter.

Italy is the only European country where Android grew in Q4 2012.

Over in China, Apple’s second-largest market, strong reception to the iPhone 6 and iPhone 6 Plus helped Apple grow by 2.2 points from 19 percent to 21.5 percent.

While trailing in China and some markets in Europe, the iPhone has managed to beat out Android not only in the US, but in Japan, Australia and several other big markets around the world.

Nearly one out of each four Chinese iPhone customers in the holiday quarter were first-time buyers, up from 16.5 percent the previous year. Kantar also found out that the iPhone and iPad were the “most gifted” phone and tablet, respectively, for the holidays in the US.

Smartphone penetration reached 59 percent in the US and 67 percent across Europe’s top five economies while emerging markets such as Brazil (35 percent) and Mexico (37 percent) still have a long way to go, said the research firm.