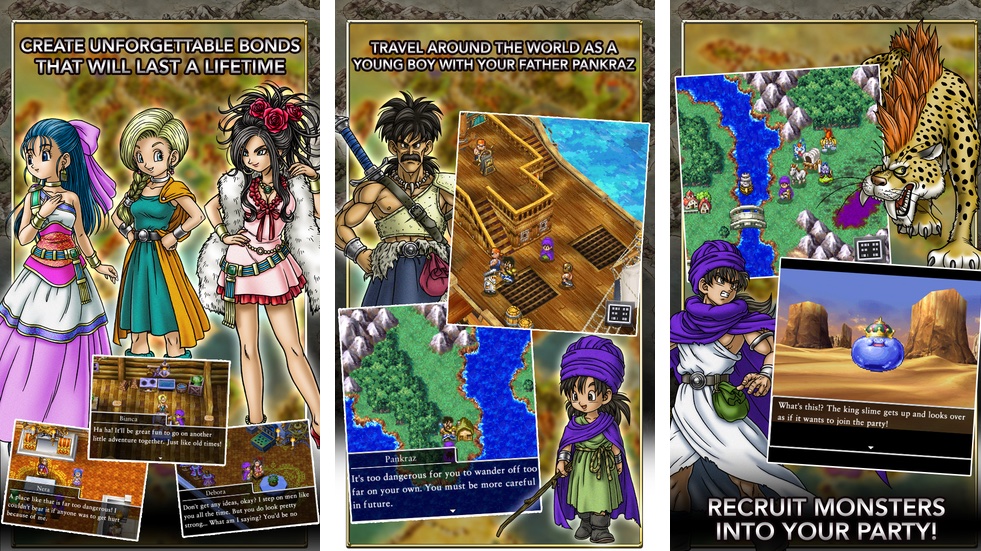 Building upon its existing ports of the popular Japanese franchise, Square Enix has now released Dragon Quest V: Hand of the Heavenly Bride on iOS.

The role-playing game is a direct port of the 1992 Super Famicom game that follows a story of a young boy who travels the world with his father, Pankraz. And when he becomes a man, the main protagonist resolves to continue his father’s unfinished quest to find the Legendary Hero.

Optimized for touch-friendly controls and with full 360-degree view control, the game includes the slime-smashing mini-game Bruise the Oooze, AI-driven battles and lets you turn monsters into your friends to gain access to unique spells and abilities.

You can chat with the cast of colorful characters and seek their advice or instruct them to fight automatically.

The Bruise the Ooze mini-game which made its debut in the Nintendo DS version of the game challenges you to tap the slimes within the time limit to earn points.

The Casino feature includes slot machines, poker, the monster arena and slime races that give you a chance to earn a few tokens that can be exchanged for in-game items.

Download the premium game for $15 from the App Store.