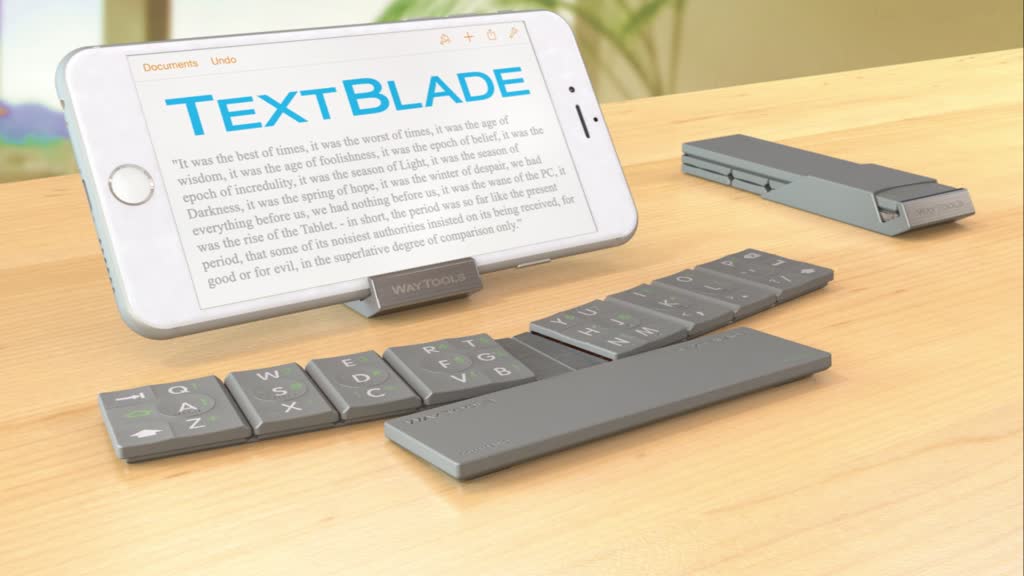 If you’re in the market for a physical keyboard for your iOS device but can’t stand the size of existing offerings, a company called WayTools may just have the most curious answer to your needs.

Bringing a whole new typing experience, their new TextBlade keyboard has the same QWERTY layout you’re accustomed to but collapses to a tiny rectangle just a third of the size of an iPhone 6, thank to built-in magnets that snap the individual pieces together.

The eyebrow raising design calls for a set of eight large touch-sensitive keys providing full access to the entire alphabet, and then some more.

Weighing just 1.5 ounces, or 43 grams, the device sports an ultra-low profile half as thick as an iPhone 6. And unlike standard rubber spring keyboards, the TextBlade does not suffer from drag, stretch or wear. Inside, it’s immense technology based on six issued patents and more than a dozen patent filings.

A precision mechanism dubbed MagLever delivers “high-quality key-feel previously known only on desktops,” according to the blurb.

Built into each key, WayTools’ patented MultiTouch Key technology — along with a set of eight dedicated keys and some pretty darn smart software — not only let you select any character with ease, but also access various symbols and frequently used characters such as “@”, right from the home row. 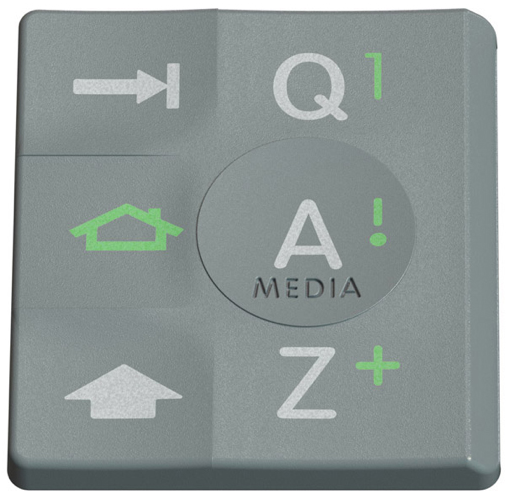 Even its specially engineered lithium polymer battery that lasts for a month is innovatively hidden in the spacebar key! The battery fast-charges via USB “in just minutes” and there’s also a built-in cordless NanoCharger.

Other features include support for energy efficient Bluetooth 4.0 connectivity allowing the keyboard to be paired wirelessly to pretty much any Bluetooth-enabled iOS, Android or desktop computing device, including the Apple TV.

Despite its unusual design, WayTools claims folks can type as many as hundred words per minute on this keyboard and has created a video demonstration to prove it, watch it right below.

This remarkable (at least on paper) accessory includes a full set of iOS-specific controls such as the volume keys and Siri control, gets you a full 19mm finger spacing with extra large keytops and 2mm travel (even more than a MacBook Pro).

“TextBlade’s innovative frameless array eliminates all keyboard shudder, with rock-solid grip that hugs the table closer than a MacBook Air, so it’s even easier on your wrist,” notes the firm.

You can pre-order yours through the WayTools Store for $99. It will start shipping next month along with a nicely done stand and a magnetic charger for recharging the battery wirelessly.

Even though it may take some getting used to, the Text Blade shouldn’t force you to learn a new way to type because you’re basically using the same fingers for the same keys as before.

Isn’t this the coolest and most portable keyboard you’ve ever seen?