Fleksy, the popular third-party keyboard for iOS and Android, has released a major 5.0 update which turns it into a platform of its own with “multiple fun and useful input options” and the introduction of downloadable keyboard themes with customizable Extensions.

These perks are in addition to other improvements such as an easier, more comfortable typing with gestures, a redesign around the new customization options, a cool one-handed typing mode on the iPhone 6 Plus and more.

“Keyboards are our primary input method,” said Kosta Eleftheriou, Fleksy CEO and Co-Founder. “With Extensions we mean to revolutionize not only text input, but all input; making it faster, easier and more fun. Why switch back and forth between apps to do things that can be done via the keyboard?”

At launch, Fleksy 5.0 included five varied keyboard Extensions on iOS (not to be confused with Apple’s App Extensions in iOS 8) and seven on Android, including the first Android keyboard with Launcher functionality.

Fleksy’s Extensions help unlock the keyboard’s true potential by allowing for customizable added functionality and are activated within the app. You assign Extensions to slots, with three slots provided at no cost and additional ones available for purchase within the app for 99 cents each.

You can customize your slots however you like and activate or deactivate Extensions at will. On the iOS side, the five Extensions are as follows: GIF Keyboard, Numbers Row, One-handed Mode, Cursor Control and Rainbow Pops.

As the name implies, the GIFs Extension makes it fun and easy to discover and send animated GIFs as easily as emoji. You can browse curated categories or search thousands of GIFs for your own to express your feelings in chats with animations. 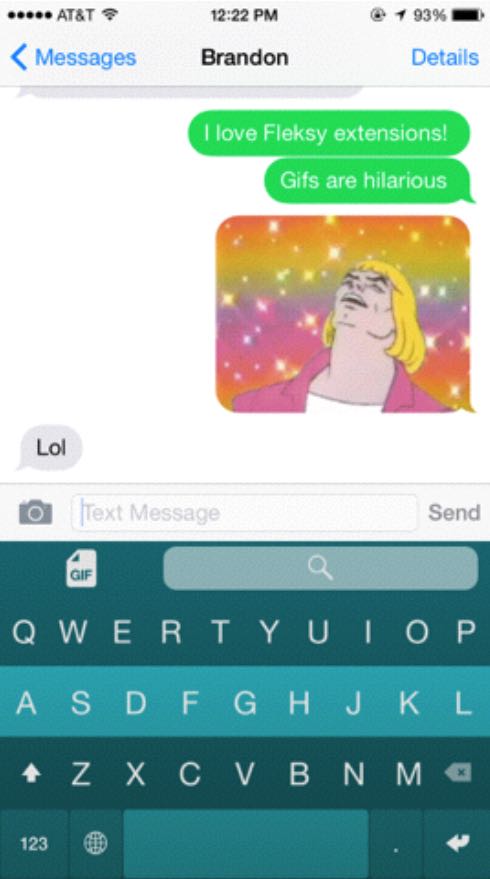 The Editor Extension is designed for quick and easy editing and formatting of text. Use its Extension bar to copy, paste and indent text, tap and drag on the spacebar to move the cursor and more. 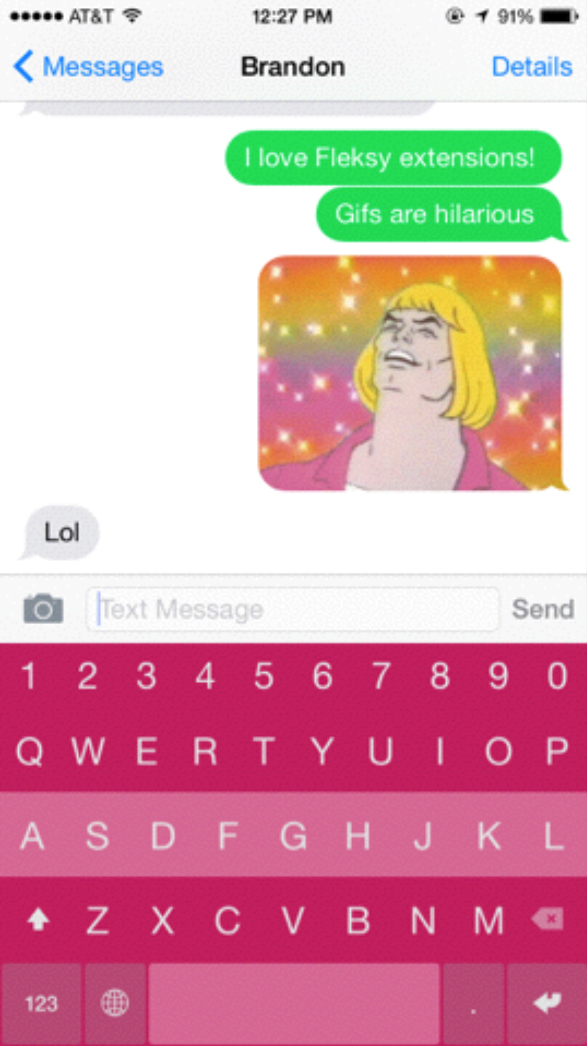 Those who love showing their Fleksy colors should check out the Rainbow Key Pops Extension. Add it and every key you tap will pop with a new vibrant color. 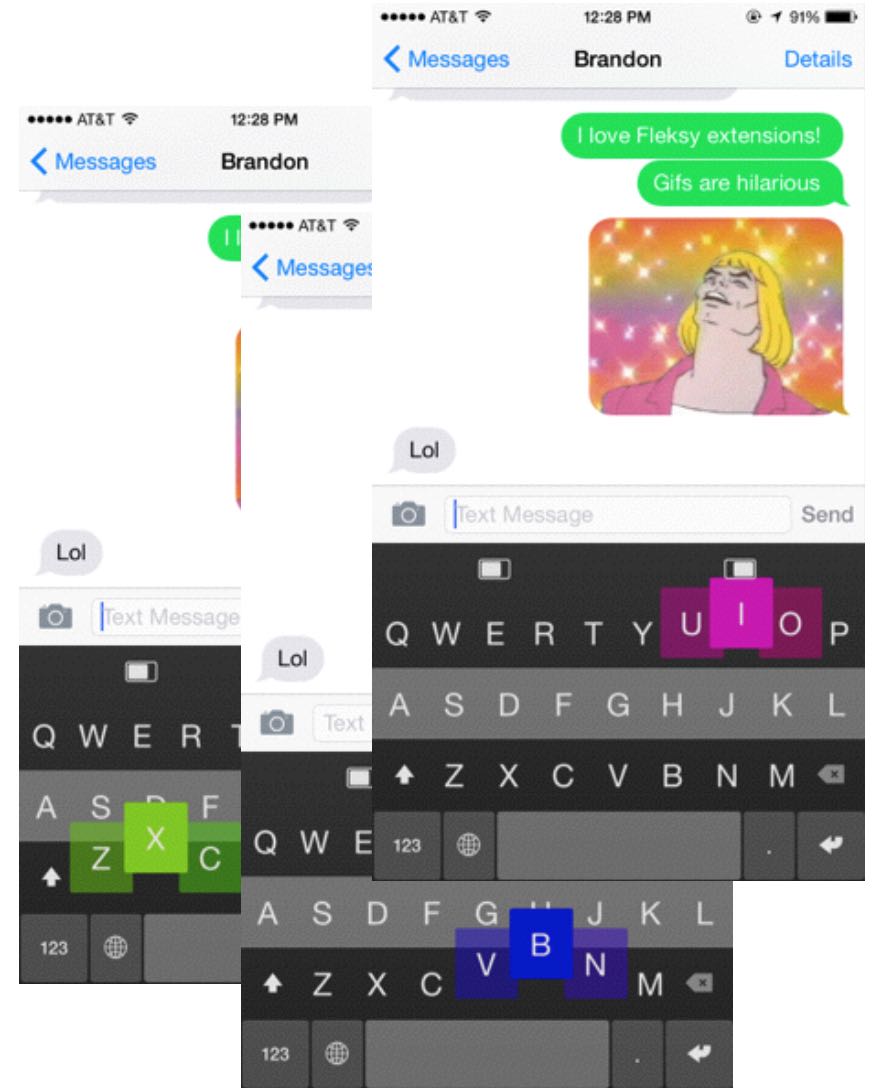 The One-Handed Typing Extensions, as you may have guessed, is designed for owners of the iPhone 6 or iPhone 6 Plus who are experiencing difficulty while thumb-typing on the 4.7 or 5.5-inch canvas by introducing easy to reach keys while moving the keyboard to the side of the screen. 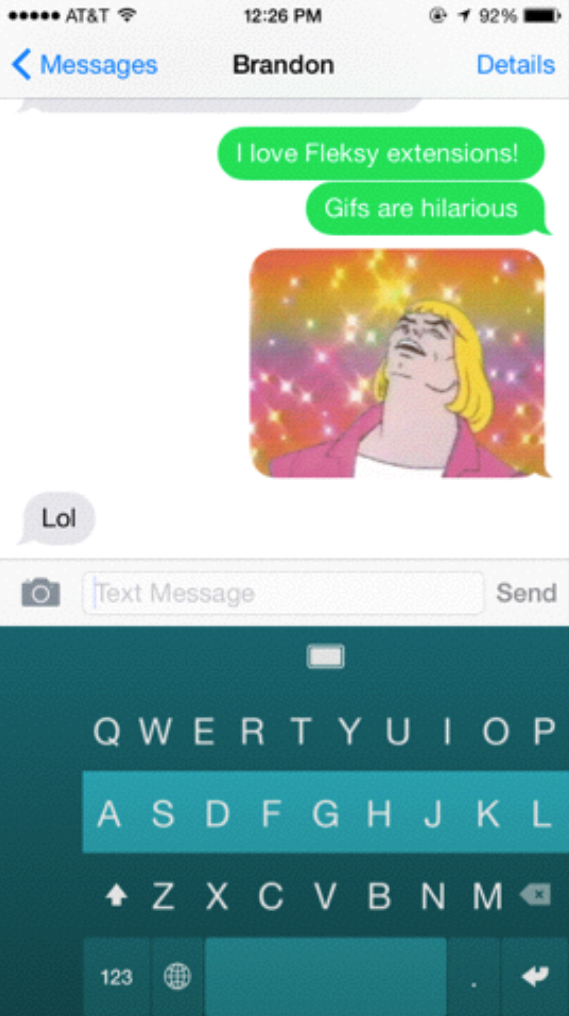 On Android, two more Extensions are available: Invisible Keyboard Extensions which makes the keyboard completely transparent so you see all of your screen as you type and the Launcher Extensions that makes it easy to navigate to frequently used apps right from the Fleksy keyboard.

As a nice bonus, Android users get to take advantage of the Keyboard Shortcuts Extensions to define and save shortcuts to speed up typing.

In addition to Extensions, Fleksy 5.0 introduces an additional 30 themes for your keyboards that can be purchased in the built-in theme store with categories ranging from Personal to Trendy and Branded to Translucent and Dynamic. 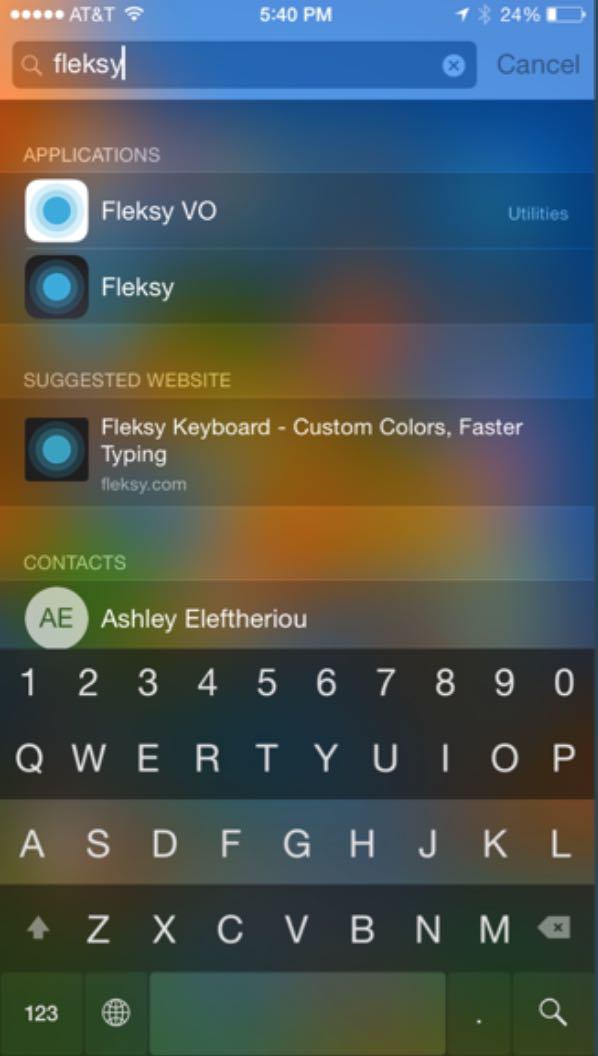 One of my favorite keyboard themes has got to be Translucent. As show above, it’s basically a see-through theme that, once installed, lets your iOS wallpaper and activity shine through thereby giving your iPhone a unique look.

. Some people may find the Translucent theme distracting, but I’ve generally had no such issues in my brief test of Fleksy’s 5.0 update.

If I had to highlight one Android-specific theme, it would be Chameleon which adds a little bit of iOS magic to Android by changing colors to match a color inspired by the app you’re using.

There are also some nicely done branded themes (see above), including Frozen and Hunger Games inspired themes, with lots more to hit the in-app store soon. 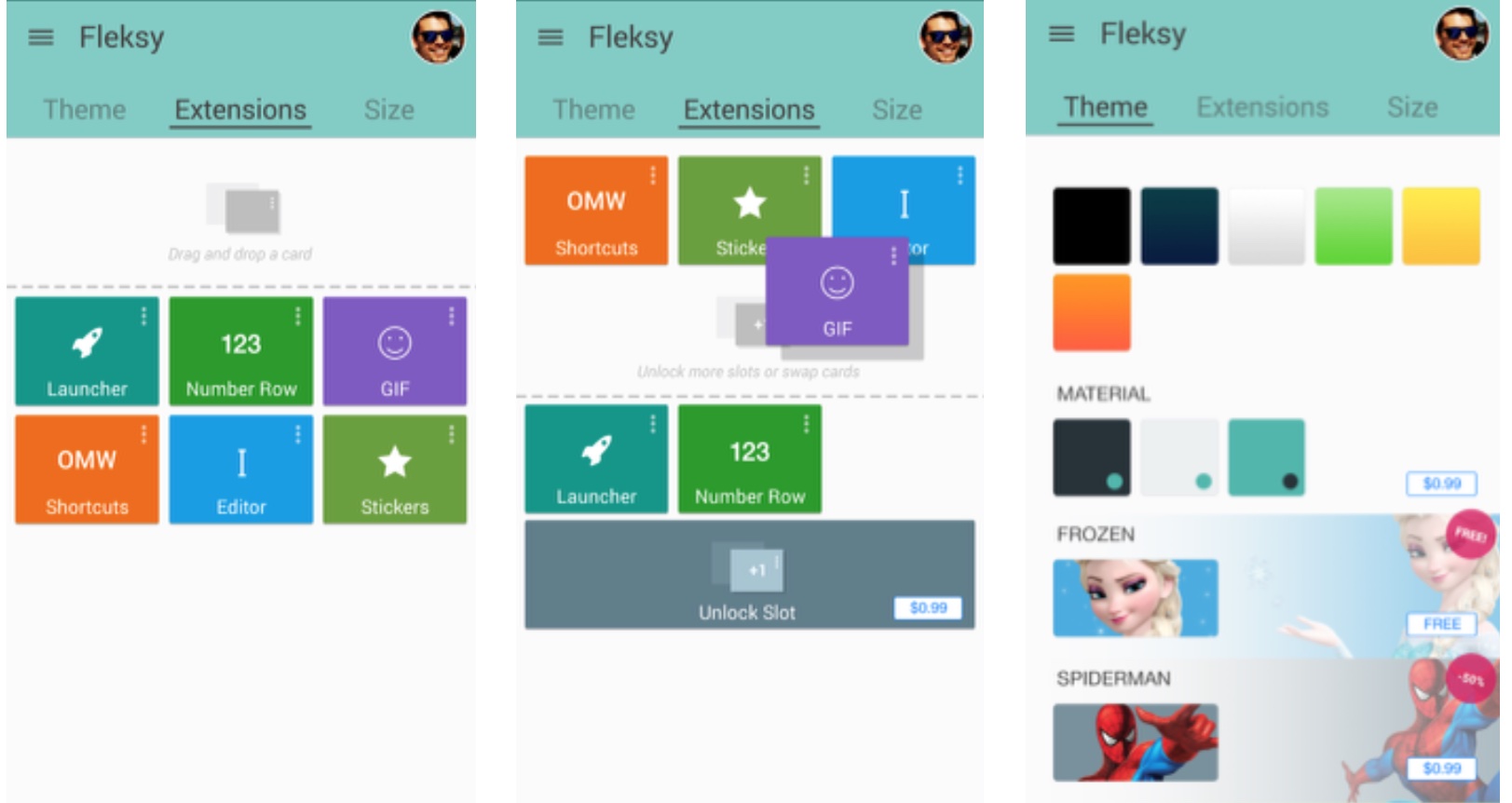 Fleksy tells me that colorful keyboard themes will sell in packs of three and branded ones in packs of two, with each theme pack costing between 99 cents to three bucks.

For those wondering, Fleksy has been downloaded more than three million times across iOS and Android during its first year on the market so little wonder that it ranked as the #1 paid app in 25 countries on iOS.

Fleksy Keyboard requires an iPhone, iPod touch or iPad with iOS 8.0 or later. A word of caution: update to the latest available version of iOS 8 which fixes key known issues with custom keyboards to improve your Fleksy experience.

Grab Fleksy Keyboard for 99 cents in the App Store.