Remember Slingshot? Yeah, me neither. If it’s been a while since you last fired up Facebook’s app that many folks deem pointless, you may want to give it another try as the social networking giant on Thursday pushed a major 2.0 update, bringing out half a dozen new features.

The app’s been rebuilt from the ground up to be “simpler, faster and more fun to share life as it happens”, bringing out private reactions, photo filters, drawings and emojis.

There are also instant notifications on a per-contact basis and you can now share fav shots out to other apps, among other new additions.

You’ll first notice the app’s new swipeable tab design making it easy to move between shots, reactions, people and the camera by swiping left or right. Whereas previously there was nothing to see in the app unless you added someone, a new Explore section rectifies that by collating content shared by people around the world, even if you don’t follow them.

“You can always choose to manually approve each follower request if that’s your jam”, the team explains. “Also, turn on instant notifications for your favorite people to get notified whenever they sling a shot.”

The team has clearly listened to user feedback. Case in point: previously, you couldn’t revisit content you shared in the past, but Slingshot 2.0 at last makes it so you can swipe through all the shots you’ve slung in the past day and share them out to Instagram, Facebook, Twitter and more. 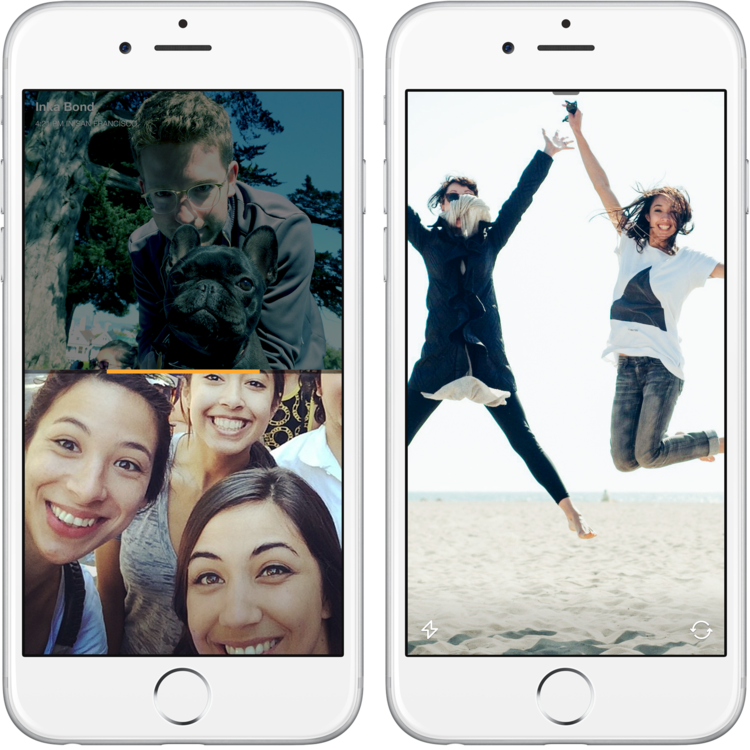 Compared with a tedious multi-tap slinging in the previous version, sharing fullscreen photos and looping videos in Slingshot 2.0 requires just two taps. And after taking a photo, the app lets you touch it up using filters (five of them in total), add captions or draw anything with your finger.

Another nice-to-have: unlike before, Slingshot 2.0 lets you preview reactions before sending. To see shots from people you follow, just pull down the camera. Again, keep in mind that any shared content gets automatically pulled after 24 hours or until it’s swiped away.

Oh, and there’s a brand spanking new app icon. Though arguably nicer, it somehow fails to do a better job conveying the app’s purpose. Here it is shown at right and compared to the old one at left.

For those who couldn’t care less about Slingshot, it’s for shooting short video and snapping up a quick photo on the go. Like other ephemeral messaging apps such as Snapchat, shots shared with friends are visible for 24 hours, or until you swipe them away.

Released in June 2014 as U.S. only affair, Facebook’s would-be Snapchat killer in the meantime became available globally. That’s of little consolation given the software hasn’t really picked up meaningful new features aside from a few new reactions and the My People tab.

Here’s hoping the team doubles down on Slingshot because the way I see it, the app’s in danger of getting phased out if it doesn’t gain traction and attracts millions of new users, fast.

Slingshot 2.0 is available free of charge in the App Store.