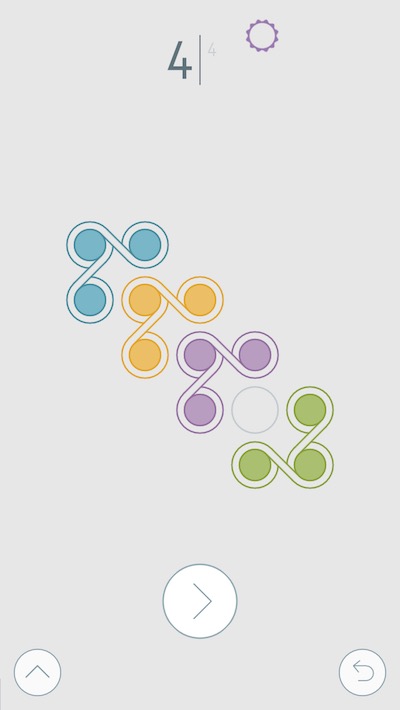 Puzzle games are a big hit around here. We love to put our brains through daily workouts to keep our minds fresh and strong. That’s why, whenever there is a new submission to the genre, we jump at the chance to check it out.

Dwelp is a puzzle game that requires you to pay attention to future steps. Not unlike chess, what you do next will have an affect on what can be done in the future. We’ve got a full game review of Dwelp for you below.

Set in the now-prevalent flat design made popular in iOS 7 (remember when everything was skeuomorphic?), the background is white and the color palette is muted with shades of blue, purple, yellow, green, and red (there is a colorblind option).

Each puzzle is set with a specific number of circles in a particular pattern. There are also a number of colored dots. Players must join all dots by placing them next to each other. To move a dot, touch and drag it across the screen to its new location.

When dots are joined, an outline wraps around them in a circular lattice pattern.

Players can either complete puzzles in order or skip around within the group. Groups are separated by 15 levels each. So, you could complete level one and then move right to level 15. Then, complete a few levels between 16 and 30 before moving onto the next group.

In the puzzle map, you can preview a level by touching and holding the icon. A thumbnail of the puzzle will appear.

The soundtrack to this game is pleasant and calming. It has a certain lullaby charm to it that makes me think it could put a crying baby to sleep. 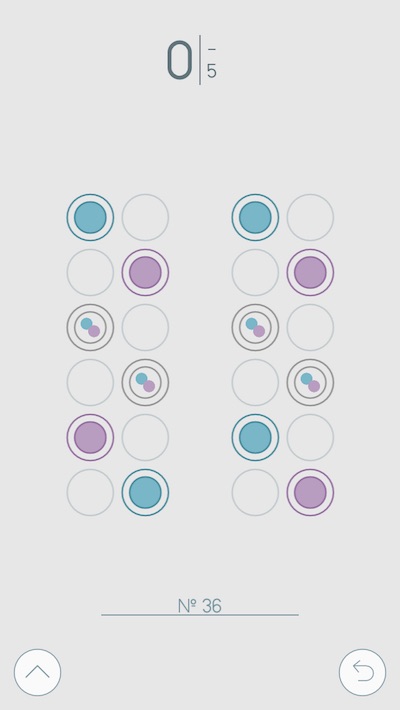 As noted above, the goal of this game is to join all dots of the same color by moving them around on the board. There are a lot of rules that make completing the task difficult, but with a bit of thinking ahead, you can solve the problem.

You can choose whichever dot you want to move first. However, after that dot is placed, the conjoined dots are the only ones of that color that can move after that. So, if you have a square grid with 16 circles and one blue dot in each corner. You can first move any one of the dots to another. However, after they are joined, the grouped dots must be relocated to one of the other corners. Then, when three dots are joined, that clump must be moved to the final single dot.

Most of the time, the puzzle won’t be as simple as a square and the dots won’t be as easy as being one color and separated by lots of room. In fact, there are times when it seems like there is no possible way you can get those three dots to fit within the patterned space and you’ll find yourself redoing moves or starting over a lot.

Luckily, it is very easy to either undo one or more moves. You can even reverse everything you’ve done so far and start from the beginning of the level. To undo one move, tap the button in the lower right corner of the screen. If you want to go back more than one move, touch and hold the button until a slider bar appears. Then, drag your finger across that slider until you’ve gone back the number of steps you want all the way to the beginning.

As the game progresses, new colors of dots are introduced. You may be working with two different colors at the beginning, but by the time you are halfway through the levels, you’ll be trying to join four at a time. Multicolored dots add more to the confusion on some levels, a dot will have more than one color in it. That means the first dot you join with it will lock it into that color. It gets confusing because you don’t know which color it should be helping. What if you use it for yellow, but it turns out to be meant for green?

There are 100 levels in all. After you reach 60, you will unlock a special bonus section. After you have completed 80 levels, you can unlock hard mode, which increases the challenge even more. 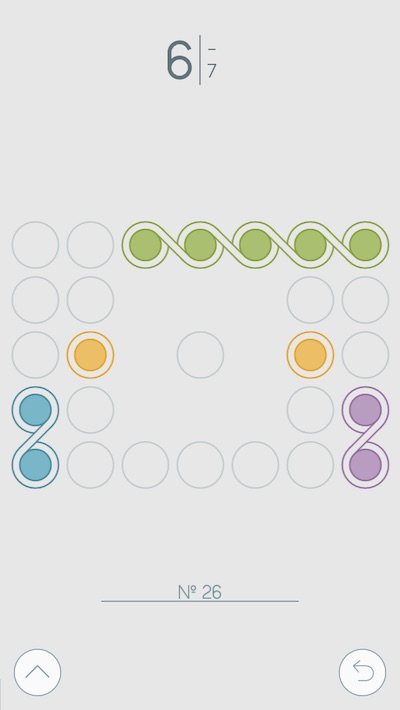 The soundtrack and sound effects are really nice here. I’ve had the song stuck in my head all day.

I like that this offers a unique puzzle challenge without straying to far from what we recognize as typical mechanics of the genre.

It is great to be able to skip ahead. I often times found myself stuck on a level. I’d skip around in order to get away from the problem. When I came back, I’d always be able to solve it.

There is nothing wrong with this game. It works great, plays smooth, and has a beautiful soundtrack. There are 100 complex levels (plus bonus rounds) that can be replayed in hard mode. What’s not to love?

Dwelp costs $0.99. During a time when games are increasing in price, this developer is sticking with the one-dollar model. The game is easily worth twice that. The replay value is high, especially since you can go through the entire game again with harder puzzles.

I definitely recommend Dwelp to fans of puzzle games. It provides hours of challenges. You can pick up and play at any time without missing a beat (the game restarts exactly where you closed it). It looks good and plays well. It will definitely go into my games folder for a long time. This game is available on the iPhone, iPad, and iPod touch. Download it in the App Store today.

Har.mon.ny 2 has a similar feel. It also makes me think of Kami.

What do you think of Dwelp? Let us know in the comments below.