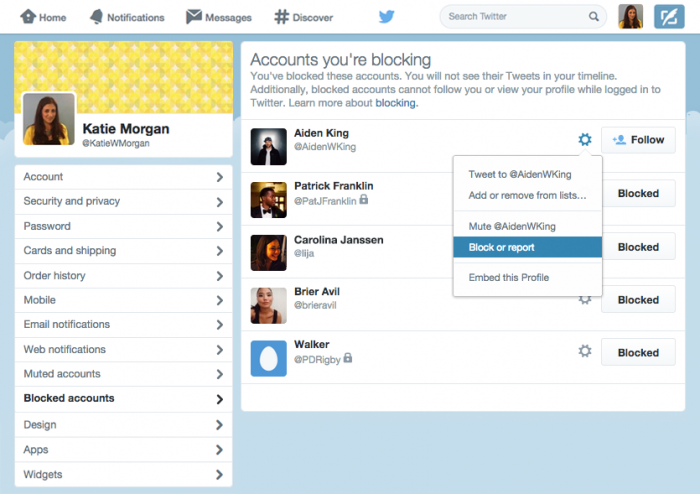 Twitter isn’t exactly a great example of what you’d call a privacy-minded online service with a wide-ranging set of comprehensive tools to prevent harassment and block poor souls who spew abuse at others.

And who could blame them? At its core, Twitter is about sharing quick thoughts with the web at large. Of course, Twitter over the years did roll out a bare minimum of reporting features.

Now Twitter’s privacy capabilities have gotten a tad better. Announced Tuesday, a sweeping update to Twitter’s existing reporting and blocking tools calls for simplified forms that mobile users can fill out with easy when reporting abuse, a change to blocking policy, a better web interface to manage blocked users and more.

For starters, the more mobile-friendly reporting process require less initial information while making it a lot simpler to flag tweets and accounts for review. Under the updated policy, bystanders who observe abuse but aren’t receiving it directly can report it as well.

Like before, any reported account will be reviewed by a real person on the Twitter safety team to determine the scope of abuse and whether or not its terms of service have been violated, in which case the account in question will be taken down.

As depicted top of post, the new Blocked Accounts page, accessible through the settings menu on Twitter.com, provides a quick overview of the accounts you’ve blocked, with more controls and features to be added in the coming months.

Twitter also notes that accounts that you’ve blocked won’t be able to view your profile. This is something of a 180-degree turn from the current policy that prohibits blocked accounts from interacting with you, but still allows them to check out your profile.

The updates introduced today are rolling out today to a small group of users. Each and every one of Twitter’s 284 million active users will get these improvements in the coming weeks.